What Is A Pomander? 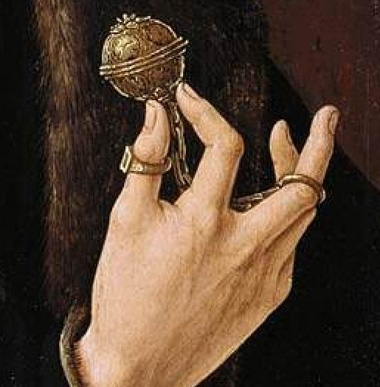 Pomander (from the French words pomme d'ambre; lit. 'ball of amber') is a relatively antiquated aromatherapeutic medicinal article made from a mixture of various types of waxes, esters, herbs, spices, and natural musk. A pomander may also be used to describe usually highly stylized ornate containers meant to house the solid, resinous balls, which were originally worn as a type of jewelry.

While such articles are now obsolete, the substance encased in them still continue to be quite popular to this day, although it is no longer carried around in one's person as it was wont to be during the early 1700s to the middle part of the Victorian Era; but is instead used in much the same way as potpourri is, in perfuming living spaces and enclosed areas. The pomanders of today have changed somewhat compared to the earlier types of pomanders, and some are even innovations of the older, highly finicky, and very sticky recipes that do away with the musks and the waxes totally, without compromising the efficiency of the end product. [1]

What are pomanders used for?

Typically made from sticky resinous substances generously laced with fragrant herbs, spices, and animal musk, the pomander was usually carried around in a specially designed ornate perforated container made to house the sticky ball without it getting in the way of everyday life. This accoutrement, also called a pomander, was typically worn as a type of jewelry, and carried around as a beauty accoutrement-cum-perfume, as well as a 'medicinal' amulet that was said to ward off diseases and the plague (a common enough fear during those times).

The notion that essential oil vapors may have some antibacterial / antiviral effect is not entirely obsolete and may yet be proven to have some actual efficacy: In the 21st century, eucalyptus oil is used in some hospitals in the battle against deadly pathogens: Dr. Jean Valnet, M.D. (a famous aromatherapist) has stated that a solution of only 2% Eucalyptus globulus can kill 70% of airborne Staphylococcus bacteria. [2]

Today, pomanders are typically used as home accents or as a type of décor in much the same vein as potpourris, another traditional aromatherapeutic concoction. Because it is a slightly outdated kind of aromatherapy material, pomanders are not as common as they used to be, although traditional recipes and easy instructionals on how to make pomanders abound online, and it has become something of a homebody's hobby.

Medicinally, pomanders benefit the general well-being of a person not due to any curative action brought about via the ingestion or topical application of the substance to your person, but rather to the subtle physical and psychological changes brought about by the scents or perfumes exuded by the pomander. With this in mind, it practically is a no-brainer that pomanders were the earliest forms of aromatherapeutic 'medicines', same as incense, perfumes, essential oils, and potpourris, and is, technically speaking, an amalgam of all of those things. These days however, pomanders function more like 'air fresheners' than they do aromatherapy balls, although the purpose of its employ remains the same.

What are pomanders made of?

The recipe for pomanders has changed somewhat over the centuries, with the earliest mention of the substance being described as a concoction that consisted of a combination of several kinds of waxes and esters combined with one or more kinds of musk, intermingled with a heady mixture of aromatic spices and herbs. Among musks, civet and ambergris (a type of organic oily substance derived from whale excretions) are among the most commonly used. Because authentic musk tends to be somewhat expensive these days, this (originally) integral part of pomander-making has been largely omitted in favour of far more affordable and easily accessible organic substances such as shea butter, coconut butter, or beeswax. Alternatively, pomanders may be made without any of these sticky substances, as the material which makes up the 'ball' (originally a shaped and cooled mix of waxes and musk) may now be substituted with a wide range of aromatic spherical or semi-spherical fruits, typically from the citrus family that is, like the older versions, encrusted in aromatic herbs and / or spices. Unlike the original recipes for pomanders, modern 'fruit-based' pomanders usually require a degree of 'curing time' – that is, time for the fruits to sufficiently dry out in order for the aroma to be at its finest. Unlike old recipes however, modern pomanders can be used instantly and are, by far, less messy and easier to make. Modern pomanders are usually more common, although traditional ones are still sold, albeit without the musk or ambergris component, as these substances are now rare and often illegal for use, since it involves animal slaughter to extract. 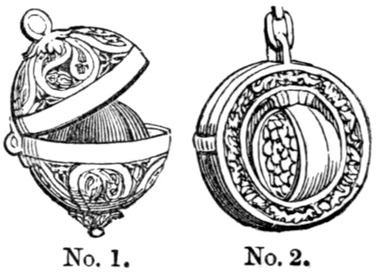 How are pomanders made?

Pomanders can easily be made at home, but these are usually more modernized variants of traditional pomanders. Authentic recipes often call for combining organic waxes, esters, and your choice of musk via heating it in a pan (it is advisable to use a double-boiler, or, in lieu of one, a glass bowl placed above a pan of boiling water) until it forms a viscous liquid which is then slightly cooled until it is safe enough to touch. This is then rolled into a ball and encrusted with your choice of ground aromatic herbs or spices. Because musk can be expensive these days, if not downright rare or illegal to use and purchase, you may follow traditional recipes but omit the musk, or use essential oils (bay, frankincense, myrrh and cinnamon work best) that imitate the warm aroma exuded by musk instead. You may simply add the essential oils to the cooling wax mixture, shape (use heat-proof gloves for this!), and roll the resulting ball into your choice of spice and herb mixture and allow it to set. Because pomanders (the article of jewelry) aren't as common as they used to be during earlier periods, you can just place all of your finished pomander balls into a bowl, or encase them in a linen or velvet pouch. Be forewarned that traditional pomanders will melt if exposed to extremely hot climates, so be ready for a mess if you live in hot or humid areas. Alternatively, you can make a no-melt, no-mess pomander by encrusting a medium-sized orange, lime, or apple with whole cloves or cinnamon sticks. This can then be dipped in melted beeswax, or shea butter, and your choice of herb and spice mix can be sprinkled on it and allowed to set. You may hang this pomander above door-jambs, above windowpanes, or in any other area of your choice. The great thing about modern pomanders is they are less messy, and they require less time to make. The older the fruit pomander gets, the more aromatic it becomes, and it lasts indefinitely!