Stevia rebaudiana belongs to the Asteraceae family and is classically referred to as honey leaf or sweet leaf. Being a nonsynthetic, noncaloric sweetener of plant origin, stevia has been widely marketed as a sweetener and a sucrose substitute in Europe and has received considerable interest due to its ability to potentially contribute to a reduced caloric intake and in turn prevent metabolic disorders. The fact that it is noncariogenic and affordable adds up to its popularity as a sweetening alternative, especially for diabetics, children, and individuals desiring a lowered caloric intake. Stevia rebaudiana leaves have better functional and sensory properties than most high-potency sweeteners. The white crystalline compound of stevia is, by estimate, over 100−300 times sweeter than table sugar. [1][2]

A small shrubby perennial, Stevia rebaudiana can grow as tall as up to 65 cm and distinctly possesses a woody stem and sessile, lanceolate to oblanceolate leaves that are oppositely arranged and serrated above the middle. Its small five-petaled flowers, about 7–15 mm, are white or light violet and are assembled in an irregular cyme. The seed is an achene with a feathery pappus. [3]

Since ancient times, as studies had unfolded, stevia has been globally employed as both a sweetener and a medicine. [2] The Europeans first became aware of stevia’s sweetening power in 1887 when M. S. Bertoni gained knowledge of the plant from the Mestizos and Paraguayan Indians, who referred to the herb as caá-êhê, meaning “sweet herb.” In 1942, production was attempted when seeds were sent to England, but this turned out to be a failure; commercial cultivation in Paraguay was first reported only in 1964. [3] In Brazil and other South American countries, Stevia rebaudiana extracts are incorporated in treatment against diabetes. [4]For more than 20 years, stevioside, a natural glycoside isolated from this plant, has been commercially utilized as a sweetening agent in Japan and Brazil, and some animal and human studies have demonstrated this stevioside’s antihypertensive property. [5]

Stevia is traditionally used in the treatment of a range of conditions such as diabetes, hypertension, and obesity. In Japan, Korea, and South American countries, Stevia rebaudiana leaf extracts are used to sweeten soft drinks, soju, soy sauce, yogurt, and other foods, whereas in the United States, these are regarded as a dietary supplement. Extracts from Stevia rebaudiana have been proposed by numerous studies to confer health-promoting properties such as antihypertensive, antihyperglycemic, anticariogenic, and antibacterial activities. [6]

Hossain et al. (2010) analyzed the chemical composition of hydrodistilled essential oils extracted from Stevia rebaudiana Bertoni leaves and isolated 62 compounds that compose 92.27 % of the total leaf oils. Monoterpenes and sesquiterpenes were predominant. The table below presents the percentage composition of the volatile leaf oils of Stevia rebaudiana. [6] 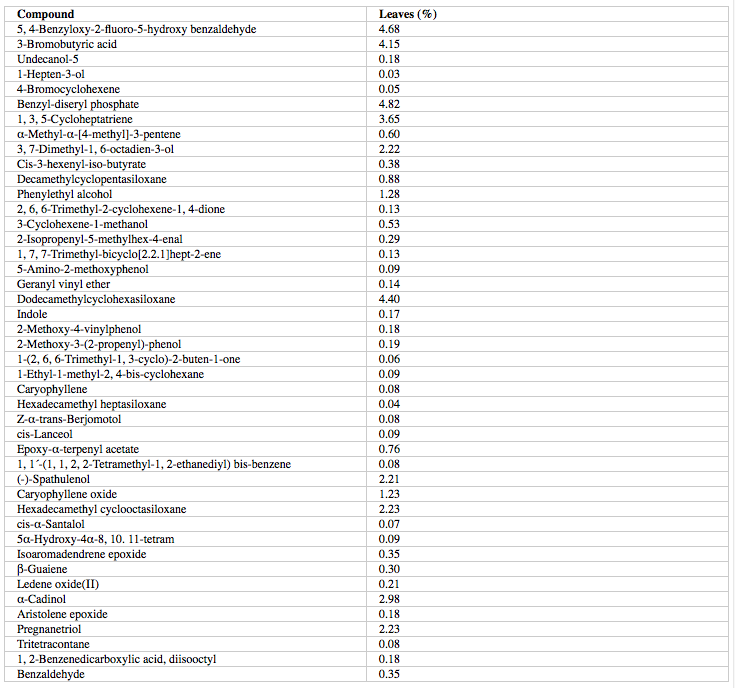 In the study of López et al. (2016), tested ethanol extract from Stevia rebaudiana displayed antioxidant activity and free radical scavenging properties. More interestingly however, antiproliferative effects by the ethanol extract were noted against cervix (HeLa), pancreatic (MiaPaCa-2) and colonic (HCT116) cancer cells, triggering cell death in these three cell lines. Although the ethanol extract from Stevia rebaudiana evidently inhibited CDK4, stevioside, the herb’s well-know component, did not, suggesting that stevia’s antiproliferative activity may be attributed to other extract compounds that inhibit cyclin-dependent kinases. [7] Jayaraman, Manoharan, and Illanchezian (2008) also noted both anticancer and anti-proliferative activities from 1:8 dilution of Stevia rebaudiana acetone extract against cancerous cells. This extract was assayed on Vero and HEp2 cells using 3-(4,5-dimethylthiazol-2-yl)-2,5-diphenyltetrazolium bromide (MTT) and was found to be nontoxic to normal cells. [8]

A 2-year, randomized, placebo-controlled study by Hsieh et al. (2003) had shown the effectiveness of oral stevioside in significantly lowering systolic and diastolic blood pressures among 168 Chinese patients with mild hypertension (aged 20 to 75 years), improving these patients’ quality of life in the absence of treatment-related adverse effects. Treatment consisted of oral intake of capsules containing 500 mg of stevioside powder 3 times daily for 2 years, and blood pressures of patients were measured during monthly clinic visits. After 2 years, patients treated with oral stevioside powder capsules were characterized by a significant decrease in mean systolic and diastolic blood pressures when compared with baseline (p < 0.05) and placebo (p < 0.05), which was detected even at 1 week following the start of treatment according to the patients’ records of self-monitored blood pressure. This hypotensive effect continued throughout the course of study, and quality of life scores of treated patients significantly improved compared with placebo (p < 0.001). [5]

An interesting study by Theophilus et al. (2015) demonstrated the efficacy of an extract from whole leaves of Stevia rebaudiana against Borrelia burgdorferi, a notorious bacterial spirochete species known to cause Lyme disease. Stevia treatment effectively eliminated B. burgdorferi spirochetes and persisters. Findings from this study demonstrated that stevia whole leaf extract, as an individual agent, exerted antimicrobial activity against all known morphological forms of B. burgdorferi (spirochetes, round bodies, and biofilms). Alcohol-extracted stevia agents (A, B, C) were most effective against Borrelia persisters and had considerable effects on the viability of Borrelia cells. When compared to three antibiotics (doxycycline, cefoperazone, and daptomycin) and their combinations, stevia A alcohol extract in SYBR Green I/PI assay significantly eradicated the log phase spirochetes and stationary phase persisters compared to control (100% effect). The log phase and stationary phase culture treated with stevia A was observed to only have dead cells. [9]

Stevioside, the glycoside derived from Stevia rebaudiana, confer helpful effects on glucose metabolism and hence its supplementation can be beneficial in the management of type 2 diabetes. In a 2004 paired cross-over study, stevioside had been confirmed to lower postprandial blood glucose levels in type 2 diabetic patients. The study involved 12 type 2 diabetic patients whose standard test meals were supplemented with either 1 g of stevioside or 1 g of maize starch (control). The findings indicated an 18% decrease in incremental area under the glucose response curve (p = 0.013) and a nearly 40% increase in insulinogenic index (p < 0.001) for stevioside treatment compared with control. Furthermore, stevioside appeared to lower glucagon levels but spared the area under insulin, glucagon-like peptide 1, and glucose-dependent insulinotropic polypeptide curves. [4]

A very early 1986 study had before established the effect of aqueous extracts from Stevia rebaudiana leaves in 16 normal volunteers on a glucose tolerance test. Individuals consuming 5 g of leaves in aqueous extracts at regular 6-hour intervals for 3 days displayed increased glucose tolerance and notably reduced plasma glucose levels during the test and after overnight fasting. [10]

The study results of Shivanna et al. (2013) indicated not only that stevia leaves exert hypoglycemic effect but also that they ameliorate liver and kidney damage and reduce the risk of oxidative stress in rats with streptozotocin-induced diabetes. The study randomly divided 80 Wistar rats into 8 groups that underwent 1-month feeding of a standard control diet supplemented with either powder (4.0%) or polyphenols or fiber from stevia whole leaves. Rats fed with stevia whole leaf powder and extracted polyphenols manifested a decrease in blood glucose, ALT, and AST levels and an increment in insulin level compared with control. The feeding also lowered the MDA concentration in liver, improved its antioxidant status through antioxidant enzymes, and enhanced glucose tolerance and insulin sensitivity. [11]

The European Food Safety Authority, based on research, has approved stevia as a safe sweetener suitable for human consumption. [1] The Food and Drug Administration (FDA) has also granted a Generally Recognized as Safe (GRAS) status to it. Over hundreds of years of use of Stevia rebaudiana for its several therapeutic properties have also somehow attested its proven safety and tolerability. [12]

Since there is still limited data on the safety of this herb during pregnancy and lactation, its use should be accompanied with caution and advice from healthcare professionals. Stevia rebaudiana can lower blood pressure and is thus not recommended for patients who are already hypotensive to avoid compounding the effects of antihypertensive drugs.