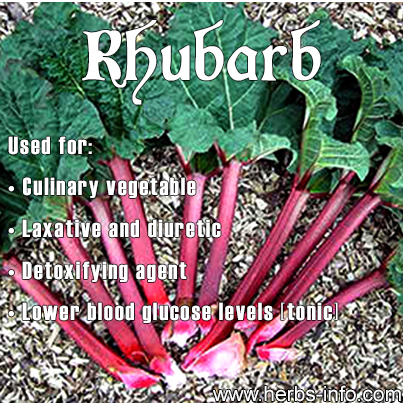 Rhubarb is commonly thought of as a vegetable, characterised by its short, stubby appearance replete with triangularly shaped leaves growing out of short, thick stalks or stems (aptly called 'rhizomes') that range from a greenish, jade-green, white, and crimson colouration. Initially left to grow wild and harvested only during its peak seasons, rhubarb soon became a precious foodstuff and commodity, eliciting the need to actively 'farm' the plant, if only for the use of its crimson-hued stalks, which were partaken of, chiefly as a vegetable (although some countries actually classify it as a fruit).

Rhubarb has been consumed as a foodstuff since time of the Ancient Greeks, although it was primarily considered a sort of weed or inedible poisonous plant, owing to the fact that its leaves contained several kinds of toxins that were potentially lethal if consumed in high dosages. While the leaves themselves may be inedible, the stalks of the plant, as well as its roots have been harvested and cultivated for both its culinary and medicinal value. [1]

At its most basic, rhubarb is a well-loved vegetable (or fruit, depending on what country one lives in) that has been used as a primary foodstuff since the early 1970s. Prior to that (i. e. ancient times), rhubarb was no more than an occasional 'munchie', consumed (as was kale) during times of famine or scarcity, or was otherwise processed as a source of glucose during times when refined and even raw sugar was a luxury relegated to the upper echelons of society (and even it yielded only very little sugary substance as to make it a negligible prime source for glucose). Nowadays however, rhubarb features in many western dishes, especially desserts, where comes into play as either an additive or a major ingredient. Rhubarb pie is one of the more popular dishes incorporating this plant, and is technically no more than its stalks mixed with sugar, encased in a crust and baked.

Despite its tart nature when consumed raw, rhubarb becomes succulent and somewhat sweet (bordering to sweet-and-sour) when cooked, making it excellent as a dessert vegetable (or, as in the case of the United States, it is termed a 'fruit'). Rhubarb has even been used in the creation of some folk wines and liquors, either as a main ingredient, or as a component in the wine-making process.

Nutritionally, rhubarb stalks pack a wallop of health benefits, as it is chock-full of vitamins such as vitamin C and K. Rhubarb stalks, when consumed in moderation, is said to be beneficial for individuals with diabetes, as it helps to properly regulate the blood sugars in their system. The presence of vitamin K also makes rhubarb an excellent anti-diabetic vegetable, while the vitamin C helps to boost the immune system and increase mineral and nutrient absorption. Like kale and a number of cruciferous vegetables, rhubarb is also an excellent source of vegetable-derived calcium. [2] Being low in saturated fat and significantly imbued with fiber, it may also help to lower one's cholesterol levels and encourage better digestion, bowel movement, and detoxification if integrated into dishes regularly. Rhubarb is also an excellent source of trace antioxidants such as lycopene and anthocyanins which are not only great anti-aging compounds, but are also potent anti-cancer compounds as well. [2]

It is not commonly known the west that rhubarb has a history of medicinal use as a herb. The Chinese have cultivated rhubarb and employed its roots as a type of medicine long before the use of the stalks as a foodstuff in the west. The roots of the plant are typically dried and brewed into a strong decoction and drunk as a strong laxative and diuretic. Rhubarb has long been used as a detoxifying agent and as a bowel cleanser due to its cathartic, laxative, and diuretic effects. [3] When made into a very mild infusion, the roots possess very little of its known laxative properties and is instead drunk as a bitter tonic that was believed to lower blood glucose levels, making it beneficial for persons who suffer from diabetes. [3] This is often integrated into medicated wines, usually as part of a special tonic formula and is drunk with meals.

Care should be taken when using rhubarb as a foodstuff or medicine however, since its leaves contain several known toxic compounds such as oxalic acid and anthraquinone glycosides that can be fatal if consumed in very large amounts. As a rule of thumb, rhubarb petioles or stalks should be consumed in its cooked state, either by parboiling, steaming, stir-frying, or lightly heating them, as the beneficial nutrients found in cooked rhubarb are more bioavailable than in its raw state.

Names of Rhubarb, Past and Present