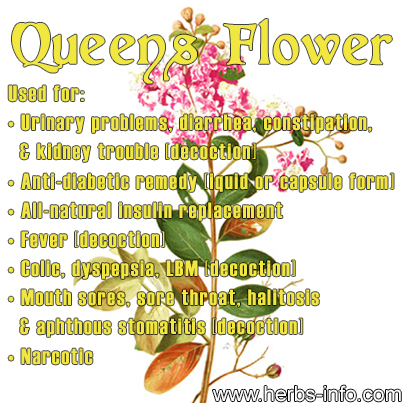 The queen's flower is a flowering tree that grows in several parts of Asia, namely the Philippines, China, Malaysia, Indonesia, Myanmar, and India – although it is commonly thought of as either a native of India (hence the name 'India's pride'), or the Philippines (where it is called banaba, among other regional monikers). It thrives in warm, temperate climates and grows best in loamy and semi-clayey soils. It is notable for being quite a tall flowering tree with a somewhat scaly or uneven bark (caused by regular shedding of the bark's outer area). Its leaves are distinct for their uniquely oblong shape that borders on the elliptical, but it is more notable for its bright flowers that range in hue from lilac, to mauve-pink, and, in some cases, carnation or even pink. The tree of the queen's flower also bears fruits which are berry-like (it is technically a drupe) and pale green to lime green in colour, measuring some 3.5 cm in length, with smooth, fleshy outer skins and dun-hued seeds. [1] The plant's leaves, fruit, seeds, bark, flowers and sometimes even its root may be employed as medicines, each with their own distinct curative properties.

The queen's flower was commonly used by natives of the Philippines, India and Malaysia to treat a wide variety of ailments, the most common being urinary problems, diarrhea, constipation, and kidney trouble. The most popular use of the queen's flower however, is as an anti-diabetic remedy, commonly taken in liquid or capsule form. Queen's flower contains a potent compound known as corosolic acid – a compound which enables the body to metabolise insulin better, typically marketed (in homeopathic and alternative medicine circles) as an all-natural insulin replacement. This substance is derived from the plant's bark, fruit, and leaves, although concentrations vary. Usually, older leaves (which take on a dark-red to orangey hue), and ripe fruits contain more corsolic acid than younger leaves and fruits, and while preferred over young leaves and fruits, the latter can nevertheless be harvested and employed for just the same purposes, albeit requiring a greater number of leaves than if older plant matter is used. For optimal corsolic acid extraction, it is advised that at least twenty grams of old leaves and fruit (preferably dried), be decocted, the resulting liquid yielding some bioactive compounds that is equivalent to about 6 to 7.7 units of insulin. [1]

Aside from its use as a natural anti-diabetic remedy, light decoctions or infusions of the dried or fresh leaves may also be employed for the treatment of diarrhea. When mixed with the bark and flowers of the plant, it can act as a diuretic and, in stronger concentrations, even be employed as a purgative; while omitting the bark and decocting the flowers and leaves alone yields a potion that may be used to treat fevers, kidney problems, and a wide array of urinary complaints. [2]

While the plant's leaves, flowers and bark are often the most commonly employed parts for medicinal uses, it's roots may also be used and prepared, usually as a decoction (by itself or with its leaves, etc., sometimes even with other herbs) and drunk as a remedy for a wide variety of stomach complaints ranging from colic to dyspepsia and even loose bowel movement. A decoction of the roots, when combined with the dried fruits or even the seeds of the queen's flower may also be employed as a mouthwash to help remedy painful mouth sores, sore throat, halitosis, and aphthous stomatitis. [3]

The large seeds that can be derived from the queen's flower's fruits may even be used as a mild narcotic. It is typically dried and powdered, and then suspended in a liquid that is then drunk, or otherwise decocted to create potent liquor that is also consumed orally. Because of its narcotic effects, care should be taken when preparing and consuming either a solution or decoction of queen's flower seeds, and preferably only small amounts should be taken at a time. Employed medicinally, the queen's flower seeds are useful for treating problems like apthae. [3] Furthermore, the wood of the queen's flower tree also makes for a good source of timber for furniture, building, or firewood.

Names of Queen's Flower, Past and Present