Osha is a perennial herb belonging to the Apiaceae or parsley family. This medicinal plant is widely distributed across the east side of the Rocky Mountains, with habitats ranging from Montana, to Wyoming, to Chihuahua, Mexico. It is scientifically called Ligusticum porteri and owns several names, including bear root, chuchupate, Indian parsley, Porter’s lovage, Porter’s licorice root, Porter’s wild lovage, loveroot, mountain lovage, and mountain ginseng. [1]

Osha is sold in the market as ground roots, whole roots, tinctures, and seeds. [1] Capsules consisting of osha powder are prevalently retailed in Mexican market. [2] In the United States alone in 2005, around 350 and 1642 pounds of dried cultivated and wild roots of osha, respectively, were harvested. [3]

Growing to a height of 50 to 100 centimeters, osha appears like any member of the parsley family, with its parsley-like leaves and umbels of white five-petal flowers, which emerge during late summer and are approximately 2 to 5 millimeters in diameter. Its elliptic or lance-shaped leaf segments are deeply incised, and the leaf bases are reddish. The fibrous roots appear chocolate brown and have a wrinkled skin. During winter, the aboveground parts of osha turn into a dense, woody, and very aromatic rootstock. The reddish, oblong, ribbed fruits are approximately 5 to 8 millimeters in length and contain seeds whose smell resembles that of sweet celery. [1]

Preparations from osha have long been used by Hispanics and Native Americans to treat various diseases such as sore throats, fevers, and influenza and other ailments related to the lungs and heart. [4][5] Mexicans extensively utilize the roots and rhizomes of osha for pain relief purposes. [6] The ethnic group Raramuri of northwestern Mexico traditionally utilize osha rhizomes in their healing ceremonies to treat diabetes, tuberculosis, stomachaches, and diarrhea. [2]

According to the Gale Encyclopedia of Alternative Medicine, osha can strengthen the immune system and boost one’s appetite. When consumed as osha root tea, the herb relieves gastrointestinal distress such as indigestion and stomach upset associated with vomiting. [5] The osha root, having antiviral and antibacterial properties, can be directly chewed or be decocted to induce sweating and improve immune function; treat bronchial infections and sore throats; and relieve coughs and pharyngitis. The numbing effect of osha roots, despite their bitter taste, soothes sore throats, while their antibacterial property can be made into use by topically applying both osha root tincture and tea on cuts and scrapes. [5]

According to Collin et al. (2014), monoterpenes and their derivatives largely compose the essential oil of osha roots, whereas sabinene and p-cymene serve as the principal components belonging to the monoterpene hydrocarbon group. trans-Sabinyl acetate has been the most vital oxygenated monoterpene isolated. The table below lists some important chemical constituents of the essential oil (two samples A and B) and organic extracts (alcohol and acetone extracts) derived from Ligusticum porteri roots. [3] 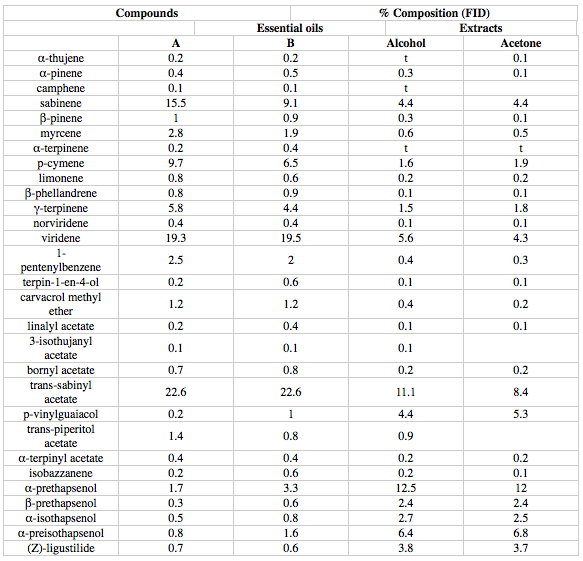 Findings from a 2017 study published in the Pharmacognosy Research journal highlighted the potential of osha root extract as an antioxidant that confers protection against oxidation of reduced glutathione (GSH). Additionally, treatment with osha root extract was concluded to be effective in stopping oxidative damage by augmenting the activities of antioxidant enzymes (such as superoxide dismutase and catalase) in acute promyelocytic leukemia cells. Incubation of human promyelocytic leukemia cells for 7 days with 200 or 400 μg/mL of osha root extract led to a two times higher viability of these cells than the control. A 12–13% decrease in lipid peroxidation was also discerned for stressed cells treated with 100, 200, and 400 μg/mL of osha, as well as an increase in GSH levels. Treatment with 400 μg/mL osha significantly elevated interferon-γ and interleukin-2 levels in hydrogen peroxide-challenged cells. [4]

A 2005 study evaluated the active constituents of osha root essential oil and extracts as modulators of multi-drug resistance in Staphylococcus aureus. It was shown by the findings of this study that at a concentration of 100 µg/ml, the essential oil acquired through hydrodistillation and solvent extraction potentiated two times and four times, respectively, the activity of norfloxacin (a fluoroquinolone antibiotic) against a norfloxacin-resistant Staphylococcus aureus strain that bears the NorA MDR efflux transporter, which is the primary chromosomal drug pump of the pathogen. [9]

Extract acquired from the roots of Ligusticum porteri has been validated in a 2011 study to exert significant hypoglycemic and antihyperglycemic action upon its oral administration to normal and diabetic mice. In particular, several compounds present in osha have been found to play different anti-diabetes roles, scientifically supporting the use of osha in Mexican folk medicine as a diabetic treatment. In vivo, (Z)-6,6',7,3'α-diligustilide, (Z)-ligustilide, and 3-(Z)-butylidenephthalide have been confirmed to display antihyperglycemic activity, with the latter being considered the most active. At a concentration of 56.2 mg/kg, 3-(Z)-butylidenephthalide reduced the blood glucose levels of streptozotocin-induced diabetic mice following an oral sucrose load. This finding indicated an antihyperglycemic action from the compound as a result of its inhibition of α-glucosidase at the intestinal level. Inhibition of the enzyme alpha-glucosidase is therapeutically beneficial in patients with type 2 diabetes mellitus since this mechanism prevents the digestion of carbohydrates, including complex sugars and starch, and limits the influence of carbohydrates on blood sugar. 3-(Z)-Butylidenephthalide has also been observed to “noncompetitively” suppress the activity of yeast α-glucosidase. In contrast, (Z)-6,6',7,3'α-diligustilide and (Z)-ligustilide do not affect α-glucosidase in vivo but nonetheless alter the absorption of glucose via an unknown mechanism. [7]

A 2014 study by Juárez-Reyes et al. demonstrated the analgesic property of osha in mice and afforded in vivo evidence that scientifically substantiates its use to treat painful conditions. Aqueous and organic extracts and essential oil of osha were found to show significant antinociceptive activity in two animal models of pain, although the osha aqueous extract and essential oil proved to be more effective in the writhing test than the osha organic extract, which, on the other hand, was more efficient in the hot plate model. A few chief compounds from osha also displayed analgesic activities. For instance, in the hot plate test, Z-ligustilide elicited a rise in latency period to the thermal stimuli and a decline in the number of abdominal writhes at doses of 31.6 mg/kg and 10 mg/kg, respectively. On the other hand, Z-3-butylidenephthalide exhibited a dose-dependent antinociceptive activity in the hot plate assay and, at doses of 10 and 31.6 mg/kg, was deemed effective in controlling the pain due to chemical irritation. At all tested doses, diligustilide prevented many writhing responses. [6]

León et al. (2011) observed sedative and spasmolytic activities for several dimeric phthalides from osha extracts, as evaluated by their application in in vivo and in vitro models. [8]

The gastroprotective activity of osha roots and their organic extracts had been demonstrated in the study of Velázquez-Moyado (2015), supporting their ethnomedical use as an antiulcer remedy. One of osha’s chief compounds, diligustilide, undoubtedly displays gastroprotective action on ethanol-induced gastric lesions in rats; such antiulcer characteristic of diligustilide relies on the involvement of endogenous non-protein –SH groups and prostaglandins. At a dose of 30mg/kg, orally administered organic extracts of osha, especially hexane and dichloromethane extracts, provided protection against gastric lesions. On the other hand, diligustilide at a dose of 10mg/kg markedly warded off any gastric injuries. [2]

Currently, there is no record on side effects consequent to the use of osha, except allergy or hypersensitivity. Caution however should still be exercised when taking osha preparations at high doses over a prolonged period because of the risk of causing kidney or liver toxicity. [5] Pregnant and nursing women should inhibit themselves from also ingesting osha products because of the lack of data regarding the plant’s safety on special populations. Osha is often confused with hemlock parsley and poison hemlock, an extremely poisonous flowering biennial, so extra caution should be paid on its correct identification. [5]

[3] G. Collin, H. Gagnon, A. St-Gelais and M. Turcotte, "Composition of the essential oil and the hydrosol of the roots of Ligusticum porteri," American Journal of Essential Oils and Natural Products, vol. 1, no. 3, p. 4–10, 2014. www.essencejournal.com/vol2/issue1/pdf/2.1.pdf