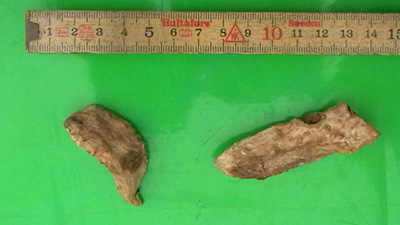 Orris root is a plant part that is derived from the Iris germanica flowering plant and its other varietals. The roots are usually collected when the plant reaches about three to four years of age, chiefly due to the fact that the active compounds in the root are far more potent during this stage, which makes for easier employment or extraction. Orris root only slightly resembles ginger, chiefly because it is often washed, peeled, and then sun-dried prior to being cut up into chunks, or ground into a fine powder. It undergoes a sort of 'aging' during the drying process, the end product of which exudes an aroma redolent of violets. [1]

Orris root has been used in several fields since ancient times, although its most common employment at present is as a primary component in many concoctions created in the world of perfumery. Aside from this, orris root may also be employed for medicinal and culinary uses, although its use in such fields have somewhat declined as of late.

Orris root is typically employed these days as a primary component in most perfumes, as the scent of orris root enhances and improves the body of most scents, creating far more pleasant and lasting notes with added depth and allure than if merely concocted sans orris root. This practice of employing orris root for perfumery dates back to the early 1700s, although the use of the root itself in cosmetics goes back to the time of the Ancient Egyptians, where it was used as a body spice, a type of incense, and of course – a perfume in its own right. Due to its regular and nearly indispensable use in the perfumery industry, orris root is chiefly cultivated for its essential oil, which is sometimes referred to as 'orris root butter', despite its being a liquid essential oil at room temperature. Orris, as a scent in its own right, is also often used in the creation of potpourri mixtures, or as a base or addition to incense mixes and herb-and-spice sachets. During the Victorian Era, it was even a common addition to most cosmetic products, chiefly pomades, pomanders, and even face powders, until most manufacturers discontinued its integration due to repeated complaints about allergic reactions. [2] Nowadays, aside from being integrated in minute amounts to perfumes and essential oils, it is also added to perfume blends to preserve the integrity of the various subtleties in the perfume, as it also acts as a natural preservative that stabilizes most volatile oils in much the same vein as α-tococepherol (Vit. E). It is even used as a culinary spice in some Mediterranean, Asian, and Arabian countries, usually mixed with hot or pungent spices like chili and turmeric.

Medicinally, orris root is typically used in either its chopped-up or powdered form. It can be made into a decoction, especially if employing the roots that are cut up into tiny pieces. These are boiled in water over low heat, cooled, and then drunk as a curative drink for inflammations, general aches and pains, colds, whooping cough, and bronchitis. A very potent decoction of orris root mixed with mint leaves or spearmint leaves was even used as a mouthwash during earlier decades to treat halitosis and relieve the symptoms of a stuffy nose. When drunk in minute quantities daily, orris root is said to act as a 'blood purifier', although very strong decoctions of the root are also sometimes given to induce vomiting – sometimes as an emergency remedy against potential food poisoning (a feat which musn't be attempted at all, save by the most experienced of herbalists!). [3]

The powdered roots may also be used directly, without being diluted or suspended in liquids, although due to its potentially allergenic nature, this is ill-advised. In the old days however, powdered orris root was sometimes employed as a type of snuff or inhalant, either by itself or mixed with minute amounts of very fine powdered tobacco, to help relieve the symptoms of a stuffy or congested nose, and to aid in the recovery from sinusitis and the headaches caused by it. The powder was also rubbed into the gums to aid in painless teething and to relieve discomforts brought about by toothaches due to cavities. [4] When rubbed briskly into the skin, it is said to reduce swellings caused by rheumatism, although the extracted oil that is derived from distilling orris roots provides faster and more reliable, if not always hypoallergenic relief from such maladies, which is why diluting it with a neutral base oil is always advisable and preferable.

Orris root is also helpful for magickal rites or recipes, as it is often associated with Luna (the Moon), and is reputed to be a very potent and powerful herb that increases one's divinatory abilities. Its association with the lunar Goddess also makes it a potent protective spice, which it often is employed as (when available), usually by sprinkling powdered orris root over boundaries. The most well-known magickal use for orris root however is for love and lust magick, where it is often mixed with other 'aphrodisiacal' herbs and spices in the creation of love philtres or potions. In the Hoodoo tradition, orris root is often sprinkled unto, or blown unto the clothes and belongings of a person who one desires, in an attempt to 'win' the other over. It is said that if performed, the object of one's desires will be unable to resist the beckoning. [5] The oil of orris root, as well as its leaves and flowers, when burnt as an incense is also said to inflame passion and lust, as well as invoke courage and vigour.

Names of Orris Root, Past and Present