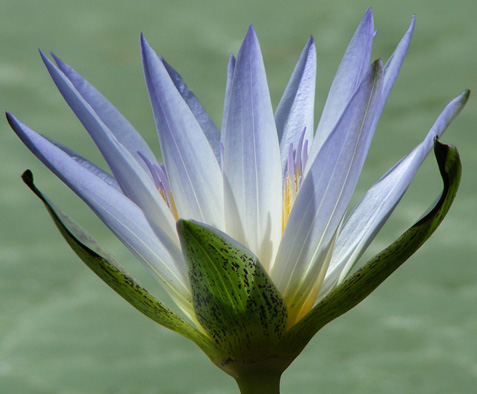 Nymphaea caerulea is the Latin name for the Egyptian Blue Lily, a very rare water-lily in the Nymphaea genus. It is thought to have originated in regions along the Nile and other places in East Africa and to have been commonplace in ancient times. Nymphaea caerulea has large, rounded leaves up to 40cm (16 inches) across and attractive flowers up to 15cm (6 inches). The Egyptian Blue Lily has been used in perfumery since ancient times, and is also used in aromatherapy. [1]

Nymphaea caerulea is often confused with Nelumbo nucifera, the Indian Lotus. There are a number of reasons for the confusion: The visual resemblance and general habit of the plant; the similarity of both the Latin and English names (N. caerulea is also known as the "blue lotus"); and also the fact that Nymphaea caerulea is another of the strong candidates for the true identity of the ancient Lotus mentioned by Homer. [1]

The Egyptian blue lily, or blue water-lily, previously a little-known plant species, sprang to sudden public attention in the UK by being featured as the focus of an episode in the 1998 television series Sacred Weeds. In the blue lily episode, the plant's place in Egyptian culture was investigated in depth. Nymphaea caerulea was sacred to the Ancient Egyptians - and judging by the high frequency with which it is depicted in their art, was prized by them above all other flowers. It has been depicted in numerous stone carvings and paintings, including being carved on the walls of the famous temple of Karnak. On one carved stone Egyptian stela, depicting a scene of a man undergoing funerary rites, he is depicted holding a flower in his hand, said to be the sacred lily, and sniffing the flower. The Egyptian Goddess Isis is said to have been the first to point out that the roots of the Egyptian blue lily were edible. [2] Also, and very significantly, when the tomb of Tutankhamun was opened in 1922, it was found to be covered in the remains of a mass of Nymphaea caerulea flowers. [3]

The traditional view among Egyptologists, until recently, was that the Egyptians attributed purely symbolic significance to the flower; partly because it "rises and sets with the sun" - the flower opens in the morning and closes in the afternoon. (Nymphaea caerulea flowers only once per year and the flower opens for three consecutive days.) However, leading Egyptologist Michael Carmichael held the controversial view that the psychoactive properties of the plant were known to the Egyptians; the plant being commonly depicted alongside other known psychoactive plants. The Sacred Weeds documentary researchers gave volunteers a "dose" of the plant and confirmed for the first time in history that it had psychoactive properties: It was found to be mood-lifting and slightly sedative while enhancing the feeling of alertness. None of the common lilies (in the UK at least) has the psychoactive property. This puts a whole new angle of possibility on the ancient Egyptians reverence for the plant. [3]

The blue lily is frequently depicted in Egyptian art in connection with "party scenes", dancing or in significant spiritual / magical rites such as the rite of passage into the afterlife. The flower is often depicted associated with wine and is thought to have possibly been steeped in wine: Such a practice, if it was indeed performed, would have created an alcoholic extract of the active ingredients. However the blue lily is also very prominently pictured in the erotic scenes that are commonplace in ancient Egyptian art. [3] The ancient Egyptian society was known to place a strong emphasis on sexuality, as depicted in their artwork - and in conjunction with the prominent depiction of Nymphaea flowers in such scenes, give very strong indications of likelihood that it was considered aphrodisiac.

Since the 1998 documentary, interest in the Egyptian blue lily has grown, as has the knowledge of the plant, although in this latter regard it would appear that scientific investigation has not been abundant. There is however another form of experimentation being undertaken; that of users seeking the euphoric effects of the plant.

Delving into the depths of the Erowid vault, where experimenters with various mind-altering substances have created a collective archive of descriptions of their experiences, we find a section devoted to N. caerulea. One experimenter, who used "tea bags filled with the crushed dried petals in glasses of red wine" steeped for an hour, went on to have "the most amazing night of sex ever". She confirmed that the Nymphaea had an aphrodisiac effect that was repeated with subsequent experiments. [4] Another Erowid writer thought however that the Egyptian blue lotus might be habit-forming. [5] A third stated that "I can see how this plant would have made parties go with a bit of a swing back in ancient Egypt". [6] A fourth, taking 1/2 ounce of Blue Lotus Extract orally (the strength of the extract is not stated), described the effects as "perfect somatic ecstasy". Reading several of these reports, there seems to be a general consensus that the effects of the plant are sedative, euphoriant and aphrodisiac. However owing to the plant's intoxicating quality there does appear to be some potential for misuse.

Turning to science, we find that Nymphaea caerulea (often seen under its other name Nymphaea nouchali) has been the subject of a relatively small amount of medicinal research. For example, a 2008 paper reported the finding of 20 constituents of the plant, which included antioxidants. [7] However, aphrodisiac research is very thin on the ground indeed. One scientific article states that another Nymphaea species (N. ampla) contains apomorphine, a substance recently discovered to trigger smooth muscle relaxation and vasodilation within the corpus cavernosum of the male - and now used to treat erectile dysfunction. However, whether N. caerulea contains this molecule is not ascertained. [8]

According to a further report found online, the Egyptian mummy Azru was the first to be examined by mass spectroscopy, in the year 2000, and was found to include substances which were identical to those found in blue lily. These substances also include phosphodiesterase inhibitors, the same active compound that is found in viagra. [9]

With both a strong possibility of extensive use in Ancient Egypt as an aphrodisiac, "party drug" and spiritual-religious tool, and a small cult of modern users who have agreed that the plant can act as an aphrodisiac, it would seem that there is a real possibility that Nymphaea caerulea has some aphrodisiac and euphoriant effect for both males and females - though science has some catching up to do. The plant is psychoactive and though its use is not restricted (January 2012), caution is advised.

Nymphaea caerulea is a very rare plant and is currently not grown commercially. However, a few sources online appear to be offering wildcrafted dried blue lily flowers. [10]

Nymphaea caerulea is listed under its other name Nymphaea nouchali in the AHPA's "Herbs of Commerce", the standard reference work for herbal supplements in the USA; meaning that it falls within the general guidelines for use as a herbal supplement / supplement ingredient in the USA.[11]