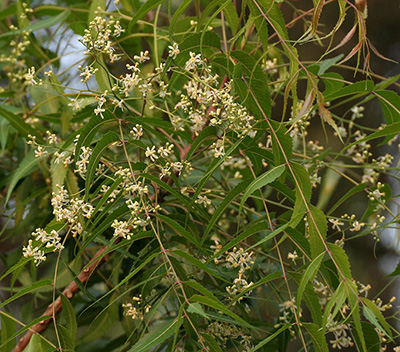 The neem tree is usually referred to by Indian natives as 'nature's pharmacy', due to its long-standing traditional reputation for being useful in treating a wide assortment of diseases. In places where the practice of Ayurveda still thrives, the neem tree is called 'tree of the 40', for its supposed '40 different medicinal uses'. The neem tree is a hardy, fast-growing evergreen that can reach a height of some 15-20 metres or higher depending on the viability of the soil. It is possessed of medium-sized dark-green leaves, white flowers, and tiny, yellow-hued fruits. While it is a native of India, Bangladesh and Pakistan, any other tropical and semi-tropical areas are home to neem trees. Their hardy nature has made them something of a pest or weed especially in some Arabian areas, as well as many other places where their medicinal uses are not widely recognized. [1]

In India however, the neem is a highly cherished plant whose many medicinal uses have been lauded since time immemorial. As with most medicinal plants, all the parts of the neem can be used therapeutically in traditional applications, although the leaves, bark, fruits and seeds are more commonly employed. Neem leaves, when young and tender, have also been used for culinary purposes.

In India, the most common uses of the parts of the neem parts range from the medicinal to the culinary. The tender shoots of the neem tree are considered a type of edible vegetable in India, and is consumed alongside its flowers as additives to soup, or in stir-fried form. Because it is highly bitter, it is a foodstuff that needs some getting used to.

The medicinal uses of the neem tree depend upon which part of the plant is used. Known for its myriad of medicinal benefits in traditional medicine, the most commonly employed parts of the plant are the leaves and the bark. An infusion of the leaves of the neem tree is commonly used in India and Malaysia as a remedy for lice infestation, ticks, and even dandruff. [2] The bark of the neem tree, and even the wood of the neem itself is traditionally reputed to possess anti-fungal, anti-viral, and anti-microbial properties akin to the leaves, which is why it was the choice material for the making of combs and hair-ornaments. [3] Due to its anti-microbial properties, a decoction of its leaves and bark has been traditionally used to treat all sorts of skin diseases. The powdered leaves of the neem tree have also been employed in modern alternative medicines as an ingredient in toothpastes, mouthwashes, and facial astringents. [4] Water that has been boiled with neem leaves has been used traditionally as a treatment for rashes and cold sores, especially when used as a mouthwash. [5]

The neem plant is also known for its unique oil, which, while non-edible and never used for culinary purposes, is also a potent anti-bacterial and anti-fungal agent and features in many traditional hair-oil recipes. Neem oil is also a major ingredient in balms, creams, and high-end soaps. A topical application of neem oil or an infusion of the oil and the leaves is believed to be a potent treatment for chicken pox. Neem oil has also been employed in traditional Ayurvedic medicine as a potent salve for rheumatism and arthritis, as well as a cure-all for a wide array of skin diseases. [6] Because it is slightly toxic in nature, it has also been used as an all-natural pesticide. [7] Neem oil has also been used as a type of lubricant, traditionally slathered on cart and barrow wheels to help prevent rusting. Imbibing very small amounts of the oil and the leaves, or just the leaves itself has been done traditionally to act a sort of traditional, if albeit potentially hazardous contraceptive. [8]

The soft twigs of the neem tree was also employed traditionally as a type of rudimentary toothbrush similar to the Islamic miswak or sewak. To this day, the rural parts of India still employ neem twigs as stick toothbrushes. Its antimicrobial properties make it very potent in protecting the oral orifices from cavities, gingivitis, and periodontitis. [9]

The production of neem seed oil, which is derived from both the fruits and the seeds of the plant, leave a residual substance known as neem cake which can also be employed as a type of natural fertilizer-cum-organic pesticide. [10] Due to the various uses of the neem tree, large trees or groves have been considered a place of worship in the traditional religion of Hinduism.

Despite its varied uses, care should be taken when using neem for traditional medicine as compounds present in its parts are known to be toxic to both humans and animals when ingested or absorbed in very large amounts.

Names of Neem, past and present