Milk thistle is a flowering plant of the lily family, commonly considered in some areas as a type of prevalent (although medicinal) weed. Characterised by its long flowering stalk and variegated leaves, it is highly noticeable for the unique colouration of its leaves, which are light to dark green on the edges but lined in white in the middle, radiating out towards the growth of leaves. It is also notable for its flowering bud which is replete with spiky protuberances that surround an equally spiky-looking purple to magenta-hued flower. Reputedly named for the unique white lines found in its leaves, it is better known as 'milk' thistle due to the fact that is exudes a milky-white sap from its stems and branches when cut.

Long used as an herbal remedy in both Eastern and Western medicine, milk thistle has enjoyed a renaissance in popularity in the West recently - most probably as a result of several significant scientific discoveries concerning its remarkable medicinal qualities. Its use in traditional eastern medicine is more obscure. Thought to be a native of the Mediterranean where it is used as both a medicine and a foodstuff, milk thistle also grows in select areas in the Middle East, Asia, and Africa. [1]

While the use of milk thistle as a medicinal plant has its foundations in ancient herbalism, its medicinal benefits have been reported in numerous peer-reviewed scientific studies, so that today, milk thistle supplements and other products containing the herb have become a staple of alternative medicine and natural pharmaceuticals.

Nowadays, milk thistle is most often prescribed as an herbal supplement said to help protect the liver from damage brought about by excessive drinking, medication, or other toxic input of the modern world. The active compound found in the plant – silymarin, is found in the seeds and is usually touted as responsible for its protective capacities. Nowadays, extracts of the active chemical compound are usually sold as food supplements, although this is but a fairly recent innovation.

Milk Thistle as traditional remedy: In earlier times, milk thistle was usually brewed as a tea, with both its leaves and its flowers possessing significant medicinal benefits. Aside from its liver-protective capacity, milk thistle was once employed as an anti-diabetic drink and as a type of bitter. In old times a decoction of milk thistle tea was usually given as either a diuretic or a stomachic, depending on the concentration of its liquor. [2] 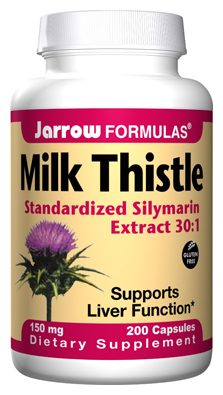 Used fresh (or dried) and infused in alcohol, the resulting tincture was then consumed as either a stomachic, a digestive, an emmenagogue, or a detoxifying drink. When made into a tincture with dandelion, ginger and basil, it is usually drunk as a pick-me-up after a night of heavy drinking to help fight off the symptoms of hang-overs. In this respect, a tisane of milk thistle and dandelion flowers drunk after a heavy alcoholic binging spree is believed to prevent hang-overs the next day, or at least reduce its severity. Because of its detoxifying ability, milk thistle was once employed as a quick remedy for cases of poisoning as it functioned not only as an antidote, but it also helped assist the body's system in flushing out the toxins with no detrimental side effects. The leaves of the milk thistle can even be consumed as food, and, if employed as such, is typically fed to nursing mothers as it helped to encourage the production of milk, acting as a natural galactogogue. [3] A very strong tea made from the flowers and / or leaves of the milk thistle plant has even been used in traditional Western herbal medicine as a carminative (helping to relieve gas and encourage the good function of the bowels), although too much can sometimes cause stomach upsets.

Milk thistle may even be made into a douche, as traditional remedies prescribe it for candida and yeast infections, while a potent rinse made from its leaves and stalks can be employed as a quick remedy for psoriasis and eczema. A facial rinse made from a potent decoction of milk thistle, or a tincture of milk thistle, rosemary, thyme, and rose may even be used as a facial wash and astringent to help prevent acne and pimples. [4]

Milk Thistle as hepatoprotectant:This is currently considered the most significant use of the herb: Silymarin is typically marketed as a liver-protector and as a food supplement that is said to prevent hepatitis.

Milk Thistle as anti-cancer agent: With recent studies into the effects of silymarin on the body, researchers have found out that aside from its beneficial liver-protective properties, silymarin also helped in fighting certain kinds of cancers that affect the internal organs. See our page on anti-cancer herbs for info.

Very recently, scientists have reported that Milk thistle protects against both UV-induced skin cancer and “photo aging” (light degradation) of skin. Two University of Colorado (USA) Cancer Center studies, the 2nd of which was published on Jan 28th 2013, have demonstrated that silibinin – the main active ingredient in milk thistle seed extract – is effective against both ultraviolet A (UVA) and ultraviolet B (UVB)-induced skin carcinogenesis and photo-aging. What’s truly astonishing is that silibinin has been found to have a kind of "triple action": Killing cells that have been mutated by UVA, being non-toxic to healthy cells and also accelerating repair of UVB-damaged non-cancerous cells. Milk thistle simultaneously a) wipes out cells with damaged DNA b) leaves the healthy cells alone and c) repairs the UVB-damaged ones. [5][6]

Milk Thistle as tonic herb: Silymarin has been found to have very low toxicity - with no adverse effects observed even at high oral doses of 20 g/kg in mice and 1 g/kg in dogs. [7] Studies have also found milk thistle to be non-toxic even over extended periods of time, suggesting that it may be fine for prolonged use.

Milk Thistle vs. Diabetes / Cholesterol:Silymarin extracts have even been used to help manage diabetes and lower LDL cholesterol levels in both diabetic and non-diabetic patients. [8] Whether one prefers the extract or the non-processed whole plant itself, it should be noted that both media possess the same benefits, although the former is technically, more potent than the latter.

Milk Thistle active ingredients:The seeds of the milk thistle plant are perhaps the most useful part of the whole plant with regards to its use in modern alternative medicine, as they are the primary source of the active compound silymarin. Silymarin, the standardized extract of milk thistle pericarp (seed coat), contains a mixture of flavonolignans consisting of among others of silibinin, isosilibinin, silicristin and silidianin. [7]

In magickal purposes, milk thistle is typically used as a protective charm against snakebites, although was also used, curiously, as a potent "cursing herb" because of its associations with Mars. Worn as an amulet or incased in a medicine pouch, it was said to inspire rage and evoke uncontrolled fury. According to the notorious 19th century ceremonial magician Eliphas Levi, milk thistle sap mixed with milk was used by some sorcerers as a medium wherewith they drown venomous serpents, in the hopes of extracting a potent poison far more lethal than the inherent poison of the snakes themselves! [9] Despite this somewhat macabre consideration, milk thistle is also considered a powerful protection herb and wards off any malignant attacks upon one's person by either burning it as incense, or by making a sachet with some flowers or leaves sewn inside, and subsequently carrying it in one's pocket.

While milk thistle is relatively safe in moderate dosages, it should not be taken by pregnant women as it may act as an abortifacient if consumed even in small, yet concentrated dosages. People who have allergic reactions to ragweed, or any plant under the lily family should avoid using milk thistle either in its whole or extracted form, as it may cause an allergic reaction. Also, despite being a potent liver-protective herb, alcoholic extracts (tinctures) are not to be used to treat alcohol-related liver disease, as it would defeat the purpose.

Names of Milk Thistle, Past and Present