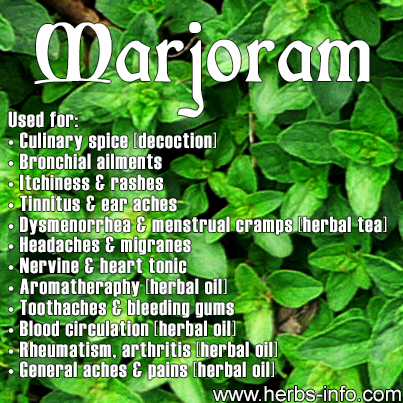 Names of Marjoram, Past and Present

The marjoram is a culinary herb commonly cultivated or wildcrafted for use as a seasoning in various dishes. Commonly called oregano, it is in fact merely a relative of true oregano (Origanum vulgare), and is quite different in taste from the former. Used often as a substitute for oregano due to its nearly similar aroma and taste, there are slight nuances in marjoram that separates it from its cousin although this may be near-undetectable to untrained (and even trained) palates. Marjoram tends to be somewhat milder in flavour than true oregano, with the former having slight tinges of citrusy sweetness that pervades the palate, whereas the latter carries with it a distinct full-bodied and long-lasting flavour that borders on the minty.

Marjoram is typically used in its dried state, although fresh marjoram may be employed as a garnish. Because of its delicate aroma, fresh marjoram is dried in the shade to prevent the volatile oils found in it from being damaged by direct heat. Despite its popular use as a culinary herb, marjoram is also a highly versatile medicinal herb. Characterised by its small, shrub-like appearance, with broad, highly aromatic leaves resembling that of true oregano, this perennial herb is not known for its hardiness (unlike others of its ilk), and chooses to thrive in well-drained, loamy to slightly sandy soils, preferably in shaded, slightly moist areas. [1]

While marjoram is chiefly cultivated as a type of culinary spice employed for seasoning a wide variety of meat-based dishes or even light soups, it may even be integrated in minute doses to desserts thanks to its unique flavor and aroma profile. Marjoram is a prime choice for substitution, especially in dishes which require the addition of oregano, although the flavor that subsequently ensues from the substitution is somewhat milder than that of oregano itself, which may call for the need to use twice the amount of marjoram to achieve a similar intensity of flavor. Because of its milder nature, marjoram is typically employed where a less pungent dish is sought for.

Medicinally, the flowers and the leaves of the plant are employed, either in its fresh or dried form as a remedy for various bronchial ailments. Like oregano-proper, a very strong decoction of marjoram is an effective remedy for relieving the symptoms of mild cough, wheezing, and nasal congestion. A milder decoction of either the leaves or the flowers may also be helpful in treating nasal and bronchial complaints, especially in infants and toddler, chiefly due to its milder nature. An infusion of the leaves, when cooled, may even be applied topically to relieve itchiness and rashes, or otherwise used as an ear-rinse to relieve tinnitus and ear aches. [2]

Marjoram tea is an excellent remedy for a wide assortment of female complaints. Usually, a very strong decoction of the leaves is made and drunk to relieve dysmenorrhea and cramps during menstruation. Because of its soothing effects on the body, marjoram tea is indispensible for women who are undergoing menopause, as it not only helps to relieve symptoms such as hot-flashes and night-sweats, but may also help to alleviate the discomforts associated with mood swings, dizziness, and vertigo. [3]

The aroma of marjoram tea alone makes for a perfect remedy for headaches and migraines, while a moderate dose of the herb as either a tea or a supplementary spice taken whole or encapsulated is said to encourage heart health and stress-relief, as it is traditionally ascribed as a nervine and heart tonic. [3]

The essential oil of marjoram, which is obtained via distilling the leaves, and sometimes even the flowers of the plant, may be used for aromatherapy as a mood enhancer. It is said to alleviate depression, sluggishness, and tiredness. It may be incorporated into alcoholic or non-alcoholic beverages, and may even be added to foodstuffs, or used straight up as a remedy for toothaches and bleeding gums (best combined with oil of cloves for better efficiency). The essential oil may even be mixed with a base-oil and used as a massage oil to help improve blood circulation. This oil is of further use to people who suffer from rheumatism, arthritis, and general aches and pains, as it soothes the muscles and helps tense, sore, or tired body parts to relax. [4] Marjoram-based massage oils can be further enhanced by combining it with peppermint essential oils, or otherwise allowing dried ginger roots to macerate in the mixture for some weeks to up to a month.

In magickal practice, marjoram is chiefly a love herb. It is typically employed in the creation of love-potions or attraction charms. It plays a major role in fixing spells and enchantments. In more practical applications, marjoram is useful for deflecting bad luck and accidents, as well as for promoting harmony in households. Burnt as an incense, it is said to banish discord where its smoke is wafted. Marjoram may even be used to help improve relationships and marriages, especially when combined with basil and rose petals. Marjoram incense, or an herbal sachet made with marjoram blossoms and balm of Gilead buds may even be used to help with depression, to counter psychic attacks, and to banish bad or negative thoughts. [5]

Care should be taken when consuming marjoram, either as a spice or a tea, however, as it is known to interact with certain hypertensive synthetic drugs. People who have a history of hypertension should also take care to not consume marjoram in excess, if not avoid it altogether.