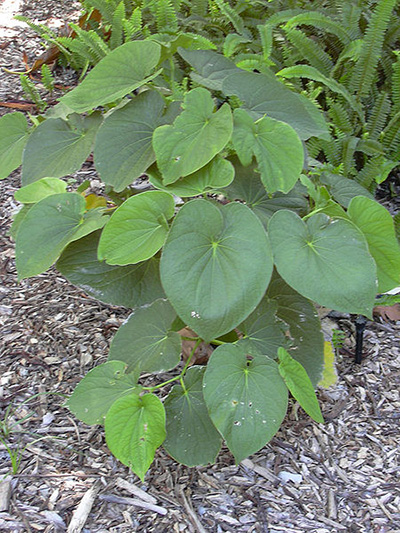 Kava is a small shrub that is native to the South Pacific group of islands, including Hawaii, Polynesia, Micronesia, Melanesia, Vanuatu, Fiji, and other areas. Cultivated chiefly for its roots that are employed in the creation of a mild to strongly intoxicating and often hallucinogenic drink, it is characterised by its propensity for thriving in loose, well-drained soil with more than adequate shade. This low-lying shrub is typified by a profusion of branches and leaves that are often of a grassy to very dark green in colour. The plant's branches and stems are highly toxic, and contain various potentially carcinogenic and hepatotoxic compounds (compounds toxic to the liver). It is chiefly cultivated for its roots which contain the active compound kavalactone, which brings about mild sedation, drowsiness, and a feeling of temporary euphoria if ingested in regulated dosages. Higher dosages may result in lethargy, hallucinations and a slew of other unpleasant, although sometimes desirable (for individuals hooked to the drink) side effects. Kava plays a very important role in the socio-cultural and tribal religious practices of the South Pacific since ages past, and its importance to the community at large remains strong to this very day, with usage even extending to beyond the local communities that have traditionally partaken of the beverage.

Originally prepared traditionally through manual means, kava has now been made available to a wider market outside of the South Pacific, typically sold as a health drink or labeled as a 'de-stressing' beverage. A number of specialty health food stores even feature kava extracts, ready-to-drink powders, and even kava tinctures and capsules, proving that this once obscure tribal drink has become quite popular among the health-conscious mass market.

When prepared traditionally, only the roots of mature kava plants (typically five years of age above) which are either used fresh or dried. The roots are bruised in a mortar made of hollowed out coral blocks, or in a typical mortar and pestle. It is then ground into a mush and mixed with water in a stone slab with the help of a solid log of wood. When macerated, it can either be drunk as is, or, in some tribal preparations, be placed in containers and left to ferment. Some traditional practices dictate that the kava be chewed to macerate the roots, and that only the females of a tribal group may do so; after which it is then placed in wooden tubs filled with clean water and left to sit and sometimes even to ferment. It is traditionally drunk from wooden bowls made from hollowed out coconut shells[1].

The most common use of kava both traditionally and in the modern context is as a relaxing or soothing beverage typically drunk during social occasions to help increase the amicability of one's person. Long used by islanders as a substitute for alcohol, its use soon spread through most of the South Pacific due to the advocacy of early Christian missionaries (the bulk of which belonged to the Catholic denomination) who thought it a better alternative to alcohol without knowing then the potential addictive factor of the drink. Initially employed by the natives of the South Pacific as a ritualistically imbibed beverage that garnered feelings of camaraderie, as well as allow (in typically large dosages) the ability to 'travel to the astral plane' (i. e. hallucinate), it was an important social and religious beverage for tribes that depended largely on ancestor reverence and tribal unison. When consuming kava, which was originally prepared ritualistically with a difference between beverages drunk for daily consumption and ones especially reserved for shamanic work, one typically felt an all-pervading calm, a sense of elation, added amicability, as well as drowsiness and a heaviness of limbs. The taste of kava veers between the grassy to the somewhat unpalatable (for Western constitutions), so it was typically accompanied by a chaser of very hot spicy foods. The active compounds found in kava not only altered a drinker's mood, but it also numbed the tongue and the esophagus, deadening the sensation and making very spicy food necessary to 'restore' feeling to the numbed parts[2].

When applied topically, kava helped to both disinfect wounds and promote faster wound healing, while poultices made from the kava root (sometimes combined with the heated and pounded leaves of the plant) was traditionally employed to soothe rheumatic joints and relieve general aches and pains. When drunk by women, it was said to help regulate menstruation as it functioned as a natural emmenagogue, while creating a rinse by infusing ground or pounded fresh or dried roots in hot water and allowing it cool was traditionally ascribed as a cure for vaginitis and candida. Encapsulated extracts of kavalactone have even been marketed as a traditional 'sleeping pill', while easy-to-prepare powders or ready-to-drink 'kava colas' are often touted as natural cures for insomnia, anxiety, and fatigue[3].

In the traditional shamanic practices of the South Pacific, specific strains of kava that are expressly prepared only for ceremonial usage is often drunk in especially large quantities to allow the shaman to commune with spirits or with their ancestors, especially when seeking counsel over grave matters. Another strain of kava, one expressly reserved for the consumption of the elite or the 'nobility' of the tribes was prepared only for a select few. Some neo-shamans attempt to use kava in much the same way as marijuana, diviner's sage, or peyote, often to very disappointing, unpleasant, and sometimes risky results due to the fact that exporting 'exclusive grade' kava reserved for ritual purposes is expressly forbidden[4]. All kava roots exported for general consumption to the west are either organically prepared roots, or otherwise adulterated pre-prepared powders containing trace amounts of roots, and a bulk of dried and ground leaves and stems (which is highly dangerous if consumed)[5].

The symptoms of kava 'overdose' may range from extreme tiredness, disorientation, weakness, irritation, scaly rashes, a yellowing of the skin and the whites of the eyes (similar to jaundice), and an overall feeling of malaise. Rashes usually appear first prior to any other symptom, by such time any contact to kava needs must be ceased for the sake of safety.

Kava was traditionally prepared only from the mature roots of the plant, although with the added demand from the West for kava and kava-based or kava-derived products, even the immature roots, as well as the leaves and branches of the plant have been used to prepare the drink. While the roots itself, when prepared in the traditional process have very little dangerous side-effects, although ill-prepared kava drinks concocted the modern way pose very grave risks if consumed for long periods, often resulting in liver damage. This is due to the fact that most modern 'ready-to-drink' kava powder mixtures often contain kavalactones that are extracted from the leaves and stems of kava plant, and not from its roots. Another dangerous way to partake of kava is to employ alcoholic extracts of its active compounds which often do away with the natural production of glutathione that traditional preparations (via aqueous extraction) often possess, thereby increasing the possibility of liver damage especially if taken for long periods of time. When employing kava medicinally, it is best to procure only organically grown, and 100% certified 'noble strains' that can be found in certified dealers online. One is advised, for the sake of safety, to veer away from encapsulated extracts and 'ready-to-drink' beverages said to contain kava. While many reliable brands of 'instant' kava drinks such as 'Lava Cola'[6], and 'King Kava' are available in the mainstream market, traditional, if albeit more time-consuming preparation, for the sake of both efficacy and safety must always be preferred over a quick, but potentially hazardous 'hit'.

Names of Kava, Past and Present