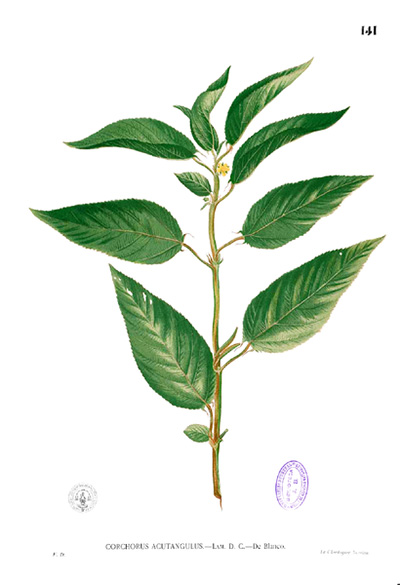 Jew's mallow is, in the tropics and sub-tropics, among the most common plants that thrive nearly anywhere. It is due to its highly prolific nature that it is rarely considered valuable in any respect, save by those cultures that have used it historically or traditionally either as medicine or food. Unlike other herbs that are said to be a native of one area but have since spread, whether due to manual introduction and naturalization or via natural means, Jew's mallow is a plant that literally pops up just about anywhere where the climate and temperature suits it. This makes the origin of the plant hard to identify, and even herbal guides that suggest its being native to the Indian continent may be in error simply due to the fact that it grows in so many places, and has been wildcrafted by many indigenous cultures, with some even practicing its cultivation even to the present day.

The earliest extant records of its use as a medicinal and culinary herb dates back to the time of the Ancient Egyptians, where the plant grew wild prolifically near the edges of the Nile River. Today, the plant can still be frequently found near rice-paddies, shallow banks, beside streams, and even on roadside wastes. It is a very common sight, not only in the Philippines where it is often thought of as a weed, but literally elsewhere where it chooses to thrive.

Jew's mallow is highly discernable for its semi-smooth, half-woody branches and its broad, serrated, slightly pointed leaves that possess two tail-like projections at the base. It is also notable for its small yellow flowers that grown singularly, instead of in clusters like in other small shrubs. [1] Once mature, Jew's mallow is host to tiny pod-like apertures that house a myriad of small, bitter seeds. These black, to purplish-black 'pods' usually explode or open up when touched with water, which is how Jew's mallow propagates, as the explosion usually disseminates the seeds to quite a considerable distance.

The oldest use for Jew's mallow (which dates back to the time of the Ancient Egyptians) was as a culinary herb, vegetable, and even fodder food. Because of its highly nutritive properties (Jew's mallow is chock full of vitamins A, B, and E, as well as minerals calcium, phosphorous, and iron), it was (and still is) eaten as a food in many areas of Egypt, the Levant, Arabia, and the whole of the Middle East as a vegetable where it goes by many names depending on the cultural dish where it is featured. The leaves, when cooked release their mucilaginous nature, and thus makes a wonderful soup or stew thickener much like okra does. While it's slimy texture usually deters first-time partakers of any dish containing Jew's mallow, locals and natives that have consumed it for years attest to its cooling, soothing, and delicious flavour. [2]

Aside from being used as a thickener for soups and stews, it can be cooked in a variety of other ways, as it can be integrated into stir-fries, or mixed with rice or some other staple grain and made into congee. It may even be mixed with other vegetables into a cooked salad, as its taste is highly redolent of spinach. While its culinary use is in itself medicinal (what, with it's being nutritionally dense), the leaves (and other constituent parts) also have their medicinal use that is divorced from the culinary.

The Ancient Egyptians once employed Jew's mallow leaves as a facial pack to help reduce wrinkles and sagging, with what can only be termed a 'legendary' association with the devastatingly beautiful queen Cleopatra - said to have employed facial packs made from the plant as part of her regular beauty regimen. [3] In Ayuvedic medicine, the leaves can be employed as a general tonic and febrifuge when infused in hot water, while a stronger decoction can be employed as a diuretic. This decoction, when consumed regularly may also help alleviate the discomforts associated with dysuria, gonorrhea, and chronic cystitis. When soaked in cold water, it can be drunk as a fortifying tonic, as it helps to boost the immune system making it especially helpful for convalescent patients or individuals who are unable to ingest solid food due to illness. [4]

The seeds of the plant, when extracted from its pod may also be employed medicinally. When used to create a very strong decoction, it is traditionally used by native Filipinos as a purgative. A light infusion of the seeds however yields a drink that is beneficial for treating fevers and liver problems. The seeds may also be dried and ground into a fine powder using a mortar and pestle, and used to treat diarrhea when mixed with ginger root and honey. Powdered seeds may be mixed with turmeric and employed as a spice for foodstuffs or, otherwise mixed into water and drunk for treating acute dysentery. [5]

The whole leaves and stems of the plant may even be burnt (as is the practice of some Ayurvedic recipes) and mixed with honey, to be taken internally to facilitate defecation. The leaves may also be dried for easier usage, commonly as a remedy for diarrhea or dysentery, although the dried leaves lose their mucilaginous nature.

Aside from its medicinal uses, the branches, stems, and 'trunk' of the plant, once macerated in water, yields a strong, natural fibre referred to as jute, which is, next to hemp fibre, abaca and cotton, one of the most highly cultivated natural fibres in the Asiatic parts of the world. [6]

Name of Jew's Mallow, Past and Present