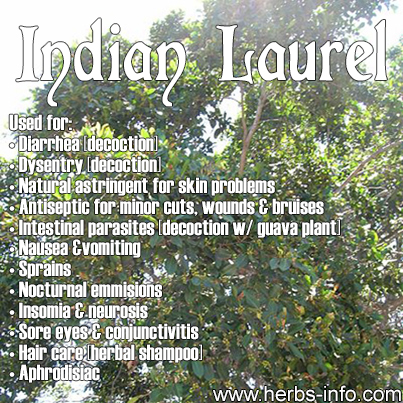 As is typical of most laurel species, the Indian laurel can become a highly evasive species, especially in places where the climate and the soil is in accordance with their 'temperaments'. In such optimal conditions, these plants are bound to thrive and produce 'laurel forests' - literally, groups of tall, large trees that often populate the majority of any given landscape that it finds conducive to its growth.

The Indian laurel is characterised by its somewhat slim, semi-hairy when young, but rough and textured when mature. It is also characterised by small, yellow-hued flowers that occur in umbels that grow on the base of every leaf. Its fruits, which are small, round berry-like growths contain a number of seeds and are bitter to the taste. It is used medicinally in many areas where the plant thrives, with the exception of tropical Australia, where the plant is simply considered a landscaping element or as a source of firewood.

The Indian laurel is a common medicinal herb in the Philippines and most of Asia. As with the majority of medicinal herbs in Asia, all of the constituent parts of this plant may be used medicinally, each with their own curative virtues. Despite this, the most commonly employed part of the plant is its leaves, which are employed in a wide variety of ways to treat various illnesses. The simplest method of employing its leaves as a curative substance is through decoction or boiling, which can be used to help treat diarrhea and dysentery. Very strong decoctions can also be used as a natural astringent for skin problems, and as an antiseptic for minor cuts, wounds, and bruises; it can even be used to treat intestinal parasites, usually when combined with the leaves of the guava plant, or simply by itself. [1] A light decoction or infusion of dried or fresh leaves may also be employed to help alleviate the symptoms of nausea brought about by menses, and even help to allay vomiting. [2] The leaves of the Indian laurel may also be employed as a natural anti-microbial agent, often alongside its other constituent parts (i. e. bark and roots). The leaves may also be made into a poultice and used to treat minor sprains and bruises, although it is believe to be more effective if mixed with a equal parts of the plant's roots. Light decoctions of the leaves may also be used to help quell nocturnal emissions in young boys, and can be drunk as a tea to help manage with insomnia and neurosis, although its employment as a remedy for the latter is, at best, unsubstantiated. When crushed, the fresh leaves yield a juice that may even be use to treat sore eyes and conjunctivitis, although ensuring the sterility of the plant-matter is first and foremost necessary to guarantee its curative ability. [3] Because of its antimicrobial and antiseptic abilities, extracts of the leaves, if not the whole of the plant is even used as an ingredient in herbal shampoos, the result of which is said to help prevent hair-loss and premature graying. This idea is supported by the fact that traditional Filipino and Malayan herbal medicine employs decoctions of the leaves as a hair-rinse to fight dandruff, and prevent hair-fall.

It is the bark of the Indian laurel that has the most uses in traditional herbal and shamanic medicines. In many countries within Asia, the bark of the Indian laurel is employed for a variety of uses. The bark is usually made into a decoction and drunk to help control diarrhea, while a paste rendered from a combination of the plant's bark along with oil (coconut, avocado, or sesame usually) may be applied to open wounds as an antiseptic and to facilitate in faster healing. This practice is very common in Indian Ayurvedic medicine. [4] A very strong decoction of the bark may also be used as an antiseptic when applied to open wounds, sores, and scabies or may be drunk to treat general intestinal problems. It is often believed by some tribal cultures that the bark of the Indian laurel may even act as an aphrodisiac (in stark contrast to the preparation of leaves that serve to quell libido).

The roots of the Indian laurel may also be used medicinally, either as a decoction that serves as an emmenagogue, or as a poultice (either by itself, or with the plant's leaves) for sprains, bruises, and general aches and pains. Lastly, the seeds of the Indian laurel also possesses medicinal properties, as it can be made into a paste and used to treat boils, or otherwise crushed in order to extract its constituent oils which can be used as both an essential oil, or as an ingredient in soap and astringent-making. [5]

Names of Indian Laurel, Past and Present