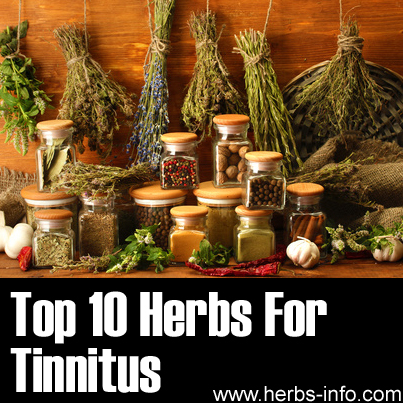 Tinnitus sufferers are troubled by persistent buzzing, recurring crackling or clicking sounds, heard inside their ears or head when there is no actual sound being created. While tinnitus is not a psychosomatic condition or disease, many people may feel this way and when chronic, it can even impair your ability to identify genuine sounds. [1]

Sometimes, tinnitus is accompanied by anxiety, depression and difficulty relaxing and sleeping. [2] Tinnitus is often caused by frequent exposure to loud noise. It may also be caused by old age. [1] Chronic tinnitus has also been attributed to usage of common drugs like aspirin, steroids, anti-depressants, aspartame, anti-anxiety medications, antihistamines, antibiotics and painkillers. [3] This presents a problem for those who intend to resort to drugs to alleviate tinnitus or those who are currently on medication. This is one reason why more and more people are seeking alternative remedies through medicinal herbs.

Of all herbs studied for tinnitus, gingko biloba is the most widely researched and shows the most promising results. Scientists believe extracts taken from gingko's leaves enhance blood flow to the ears which can reduce the annoying buzzing and clicks associated with tinnitus. [2] Studies found that gingko extracts contain flavones glycosides and terpene lactones beneficial for tinnitus sufferers, especially tinnitus related to ageing and poor circulation. [4] The American Herb Association reports it can take around 3 months for gingko's effects on tinnitus to be apparent and if tinnitus is due to damage to the inner ear nerves, larger doses of gingko may be necessary to achieve results. [5] While gingko may not work for all tinnitus sufferers or work slowly, it is practically absent of any side effects and may nonetheless benefit your memory. [4]

By relieving stress and also improving blood flow to the brain, black cohosh is said to be a useful herbal treatment for tinnitus. [6] One reported source of tinnitus is deficiency in serotonin levels. Researchers from the University of Illinois found that black cohosh contains chemical elements that attach to and stimulate serotonin receptors to correct this deficiency. Another 2008 study also noted that the serotonergic properties of black cohosh may be due to the presence of a serotonin offshoot known as N (omega)-methylserotonin. [1] Herbalists often recommend to combine black cohosh with gingko biloba for optimum results. [4]

Among adults, drinking tea made with fenugreek seeds thrice a day is found to reduce symptoms associated with tinnitus. [6] Research shows their active ingredients are alkaloids, lysine and L-tryptophan. Aside from these, steroidal saponins like diosgenin, yamogenin, tigogenin, neotigogenin and mucilaginous fiber of fenugreek seeds have been known to benefit tinnitus. [7]

Some experts believe in the potency of fresh plantain extracts as a superb remedy for tinnitus and other ear related infections. [4] In 1995, five phenylethanoids of plantain were isolated and found to exhibit inhibitory effects on arachidonic-acid-induced mouse ear edema. [8] Plantain extracts may be drank as juice thrice a day for 6 weeks - or a plantain infusion can be carefully used to rinse out the ears. [4]

If tinnitus is caused by thickening of mucous in the ears, then the ability of goldenseal to soothe mucous membranes enable it to be a remedy for reducing excess thickness and consequently, the pounding sounds you hear. By improving the state of mucous in your ear as research shows, this herb used for centuries also earns a place in the list of herbs capable of alleviating tinnitus. [9]

For thousands of years, sesame oil has been widely used in Ayurveda for the treatment of tinnitus. In Ayurvedic medicine, sesame oil can either be massaged around the inside area of the ears or you can apply 5-10 drops of it into each of the ears daily. This is reported to help in eliminating the symptoms of tinnitus within a week or two. [10]

Undeniably, onions have created a reputable name in the treatment of various sorts of health conditions. But did you know that they can also be used to treat tinnitus? Yes its, true. Who would have thought your kitchen has a powerful solution to your tinnitus?

According to research, applying a drop of onion ear to each ear for at least three times a day can significantly help in relieving the symptoms of tinnitus. When tinnitus is treated, you can continue applying a drop of tinnitus to each ear every week for maintenance. [11] Onions also contain anti-bacterial substance which can significantly help in reducing inflammation within the ear. This can help in eliminating the buzzing in ears. [12]

Extracts from passionflower are considered beneficial in regulating circulation and neurotransmitters - which may translate to improvement in tinnitus condition. [13] Neurotransmitters are responsible for the sending of nerve impulses into different parts of the body.

Like horsetail and ginkgo biloba, passionflower is useful in eliminating the symptoms of tinnitus. The herb also contains sedating and relaxing effects that help in relieving stress that is associated with tinnitus. [14]

For tinnitus associated with high blood pressure, rosemary is considered to be the best herb you can find. By stabilizing the level of blood pressure, rosemary is thought able to relieve the symptoms of tinnitus. For tinnitus triggered by other circulatory conditions, rosemary is considered capable of relieving its symptoms by dilating and strengthening the blood vessels. As an invigorating herb, rosemary helps in relieving depression, stress and fatigue which are considered as major factors that can trigger the onset and recurrence of tinnitus. [15]

Ok, not quite a herb. But through their ability to promote better blood circulation, sunflower seeds are considered as one of the best home remedies for tinnitus. What makes sunflower seeds effective in dealing with tinnitus is their zinc content. Research has indicated that zinc plays an essential role in the treatment of tinnitus. This nutrient helps the body fights against various kinds of infections. Furthermore, it boosts the body’s immune system and helps in fighting off infections triggered by tinnitus. Whole grains, pumpkins, oysters, shellfish, crab, shrimp, red meats, poultry, peanuts, yeast, legumes and black eyed peas are also excellent sources of zinc. [16]