Herbs For The Stomach 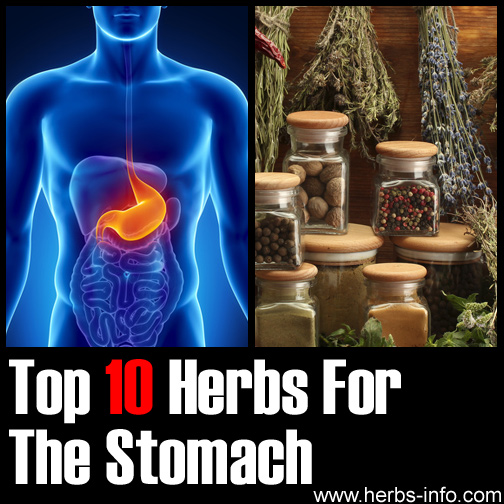 Stomach problems are some of the most common ailments. They are often due to usual everyday triggers - however stomach problems may be indications of other underlying conditions or something more serious. Therefore, it is always best to consult your physician if you are having persistent issues. However, when your stomach problems are just common aches and pains, there are several herbs that are likely to make you feel better. Here are 10 of them! [1]

10 Herbs For The Stomach

Doctors of naturopathy know that peppermint isn't just a breath freshener. Evidence also suggests peppermint essential oil, which contains menthol, has antispasmodic effects on digestive muscles. Its smell likewise soothes nerves, including a nervous stomach. This makes peppermint popular among those suffering from irritable bowel syndrome which affects some 5 million Americans. A study published in the Journal of Gastroenterology showed that patients suffering from irritable bowel syndrome who consumed peppermint oil capsules experienced relief from abdominal pain by 40% and reduction in bloating and flatulence by 50%. Another German study in 1996 validates peppermint's ability to reduce abdominal pain caused by gas. Some doctors of osteopathy recommend regular intake of peppermint tea for smooth functioning of the gastrointestinal system, although this should not be used by those suffering from heartburn. [2]

Linalool and linalyl acetate are the principal constituents of lavender that contribute to the herb's gastroprotective properties, as one study has shown. When orally ingested or inhaled, lavender essential oil was found to protect the stomach against gastric ulcers. Use of this oil in aromatherapy has also been revealed to have analgesic effects. [3] Lavender is likewise known to aid diarrhea and relieve menstrual cramps. [2]

Considered to be one of the gentlest and therefore safest herbs, chamomile possesses antispasmodic, anti-inflammatory and carminative qualities that combat common gastrointestinal issues. Research shows its natural sedative properties can soothe the mucous membrane of the digestive tract to relieve flatulence, heartburn and digestive discomfort caused by stress or anxiety. [1] Scientific research has shown orally administered aqueous extracts of chamomile exhibited gastroprotective effects against gastric ulcers among treated subjects compared to those not treated. [4]

What makes ginger unique among herbal remedies for the stomach is its ability to treat nausea and vomiting. Because of this, herbalists agree fresh grated ginger is best for preventing motion and morning sickness without causing drowsiness like other drugs. Aside from nausea and vomiting, ginger tea may also be used for gas-related bloating and pain. [1] Furthermore, a recent study conducted in 2014 found that ginger has impressive anti-ulcer properties. []

Fennel has a positive effect on upper abdominal pain whether it is in tea or essential oil form. [2] When scientists examined the anti-ulcerogenic and antioxidant effects of fennel extracts in 2007, they found that fennel can significantly reduce gastric damage like gastric mucosal lesions. These protective characteristics were attributed to the herb's ability to reduce lipid peroxidation and increase anti-oxidant activities. [5]

A powerhouse of valuable health nutrients, dandelion is a wonderful herb that contains riboflavin, ascorbic acid, zinc, iron, manganese, protein, phosphorus, carotene, calcium, B-vitamins, sterols and flavonoids. Known for its diuretic, blood purifying and liver cleansing effects, dandelion is also thought to be effective in cleansing the lymphatic system of the body as well as in promoting better digestion. Furthermore, this herb is known for aiding those suffering from diarrhea. [13]

Dandelion leaves are commonly used to increase the level of hydrochloric acid in the stomach and prevent the occurrence of tummy aches. In addition to its ability to promote better and stronger digestion, dandelion can also be used to strengthen the functioning of the liver, gall bladder and stomach. [6] Dandelion also aids intestinal gas and upset stomachs. Dandelion makes a wonderful digestive tonic and natural laxative that promotes regular bowel movements. [7]

Also beneficial for the stomach, thyme is a delicate herb that helps to relieve intestinal gas or flatulence, upset stomachs, parasitic worm infections and stomach pains or gastritis. This herb also makes an excellent aid for better digestion. When taken regularly, thyme may help reduce the symptoms of irritable bowel syndrome and colic which is triggered by intestinal spasms.

Thyme also works by relaxing the muscles of the stomach which helps relieve gastrointestinal conditions like indigestion, loss of appetite and chronic gastritis. As a good source of antioxidants, thyme also contains nutrients like Vitamin K, fiber, chromium, manganese, calcium, iron and bioflavonoids which are beneficial to the body. [8]

Cardamom is a popular spice in Asia and is often found in Indian food such as red lentil Dal. With its antispasmodic and analgesic properties, cardamom makes an effective remedy for many conditions affecting the digestive system of the body. It contains volatile oil components that are considered to be beneficial for soothing the intestines and the stomach. Cardamom is also known to relieve upset stomachs, dysentery, indigestion, flatulence, constipation and other digestive problems. [9]

This fragrant shrub is thought to be very good for the stomach and digestion in general. It promotes better and stronger digestion by detoxifying the liver and stimulating bile production. Aside from its ability to enhance appetite, rosemary also helps to relieve dyspepsia, bloating, constipation and stomach cramps. It also relaxes the muscles of the digestive tract thereby relieving stomach discomfort. [10]

Coriander (aka cilantro in the USA) is a wonderful herb that is from the parsley family and is thought to have profound effects on the digestive system by treating various sorts of disorders. When made into tea, coriander is believed to relieve nausea, bloating, gas, heartburn, upset stomachs as well as promote better bowel movements. In Germany, coriander is widely accepted as a treatment for flatulence, dyspeptic complaints and mild gastrointestinal pains. [11]