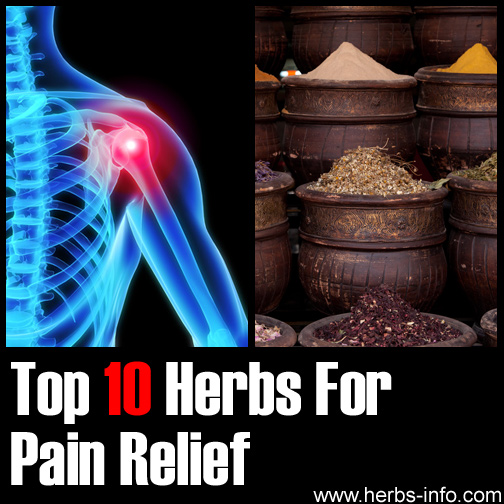 You've most likely experienced serious pain at some point in your life. Chronic pain in particular can be debilitating and cause sleepless nights. Pain lasting at least 6 months affects some 50 to 80 million adults in America and costs more than $100 billion in healthcare expenditures. [1]

Whether chronic or acute, mild or severe, pain can be a symptom of something more serious. Repeatedly ignoring pain can lead to more lethal consequences affecting your immunity, liver and kidney function.

Resorting to common painkillers however like Ibuprofen can cause more pain - both in your budget and in other areas of your body. Continued dependence on medications isn't cheap and also puts you more at risk for side effects like gastrointestinal and liver failure.

Conversely, you will be relieved to know there are several herbs considered beneficial for natural pain relief: Nature has provided ways to combat pain whether to reduce inflammation or stimulate the brain's healing mechanism. [2]Important note - if you are in serious pain, please seek professional medical advice and please be aware that information on this website should not be seen as a substitute for professional medical care.

Talk about finding a pain relieving herb right in your kitchen! An anti-inflammatory herb used by the Chinese since ancient times, ginger targets pain caused by arthritis, headaches, menstrual cramps and muscle soreness. [3] The anti-inflammatory properties of ginger have been widely recognized that a study in 2005 demonstrates its effectiveness over other anti-inflammatory medications like aspirin. [4]

Ginger can be directly applied to the affected area or sipped as syrup or tea especially during chilly weather. Its root may be boiled and drank or inhaled when applied in warm baths. [1]

This South African herb indeed does have devilish properties when it comes to attacking hip or knee pain. Research suggests it can reduce osteo-arthritic related pain by as much as 25 percent, significantly improving mobility within a few weeks. [5]

Another 2007 study has found the analgesic and anti-inflammatory characteristics of devil's claw to reduce medication usage among 60% of participants suffering from back, neck and rheumatic pain just after 8 weeks of using devil's claw. [4]

If there's an "oldest" home pain remedy, it'll probably be the white willow which was used since 500 B.C. in China. [5] It's known to alleviate back, osteo-arthritic and nerve pain. [6]

Available in extracts or as tea, white willow contains the substance - acetylsalicylic acid - used to make aspirin. It thus mimics the healing powers of aspirin in a gradual manner but may cause less of the common side effects of aspirin. [7]

Another easily accessible herb as it's the same spice found in curry. Turmeric, with its active compound, curcumin, is potent due to its ability to improve blood circulation and reduce clotting. Hence, it's commonly used when you have a sprain, bruise, inflamed joints, or even suffering from skin and digestive issues. [3]

This same herbal root that promotes sleep is also a natural pain reliever because of its ability to calm the nervous system. Consequently, aside from remedying insomnia, tension and anxiety, it can reduce nerve sensitivity to drive down pain. [3] Valerian can also be taken as tea or as a supplement.

While these herbs may not be as fast acting as your typical painkiller, they do their jobs safer and with longer lasting results.

Together with a holistic approach such as combining herbal treatments with a healthy diet, therapeutic exercises, and stress releasing techniques like meditation [7] , you can help your body treat not just the pain symptoms but also the root cause for a pain-free, active lifestyle.

This herb is probably one of the most popular natural treatments for pain. Licorice is rich in glycyrrhizin compound that is known to block and relieve inflammation. It also helps in preventing the occurrence of side effects of cortisol such as anxiety and fatigue.

When taken, licorice acts as the body’s natural corticosteroids that prevent inflammation. It also helps in reducing the level of free radicals on the site of inflammation as well as in preventing the production of enzymes that promote inflammation. [8] Licorice is also an excellent herb for the treatment of sore throat, however, it is not recommended for people diagnosed with hypertension. [9]

Furthermore, licorice helps in treating inflammation and pain caused by stomach ulcer, gastritis, eczema, bronchitis, arthritis, sore throat and heartburn. It also works by reducing the inflammation associated with stomach ulcer. It stimulates the production of mucin which protects the mucous membranes of the digestive tract against the painful side effects of stomach acid. [10]

If you are in pain, oregano is definitely one of the best herbs to take into your food. This powerful herb is known for its anti-spasmodic, anti-inflammatory and analgesic properties. In fact, it contains 32 anti-inflammatory compounds. [11] Oregano is also a good source of a variety of health nutrients which include iron, copper, potassium, calcium, niacin, manganese, zinc and Vitamins E, C and A.

Since the start of the 5th century, oregano has been widely used by the Mediterranean culture in treating diarrhea, stomach pain and other health conditions. It is believed that this herb is capable of alleviating the pain suffered by people with sciatica, joint pain, muscle spasms, backache and other chronic pain illnesses. [12]

Highly recommended for women suffering from menstrual cramps, this powerful herb is known to contain 27 antispasmodic and 16 analgesic compounds. [14] Coming from the family of parsley and carrots, fennel is often used as an ingredient for cooking. Through time, researchers discovered that this herb is capable of assisting the body against a wide range of illnesses because of its antispasmodic properties. These conditions include gout, colic, gas, spasms and cramps. For women with menstrual cramps, fennel's antispasmodic properties help in relaxing the muscles of the body, especially those found in the uterus. [15]

When used as a compress, fennel makes an excellent treatment for inflammation of the eyelids, and conjunctivitis. When used as oil, it helps in easing rheumatic and muscular pains. [16]

This herb is makes a very popular home treatment for toothaches. In fact, many over-the counter (OTC) pain relievers and mouthwash today feature clove as one of its ingredients. Clove is known for its anti-inflammatory and antibacterial properties.

It offers a great deal of relief to people who suffer from painful gums and teeth. An excellent source of magnesium, fiber, calcium, manganese and Vitamins K and C, clove is also rich in eugenol compound that is known to be effective in reducing inflammation, relieving pain and killing bacteria. Also, eugenol is scientifically proven to be effective in inhibiting the production of enzymes that cause many inflammatory conditions. [17] According to some, chewing a clove leaf helps in reducing inflammation, combating bacterial infection as well as numbing pain.

Furthermore, research revealed that about 60-90% of clove is composed of eugenol where clove’s antiseptic, antifungal and anesthetic properties are coming from. [18]

Burdock (Arcticum minus or Arctium lappa)

Considered one of the best ways to deal with pain is to take food and supplements that contain essential fatty acids. This makes Burdock one of the best pain relieving herbs available today. The herb contains fatty oils, sterols and tannins which act as powerful anti-inflammatory agents. [19]

Coming from the thistle family, burdock has been in used for two centuries in treating a wide range of health conditions. In fact, it is highly valued for the treatment of gout, arthritis, rheumatism and other inflammatory conditions. [20] Burdock is also useful in reducing pain and swelling of the joints.