Top 10 Herbs For The Lungs 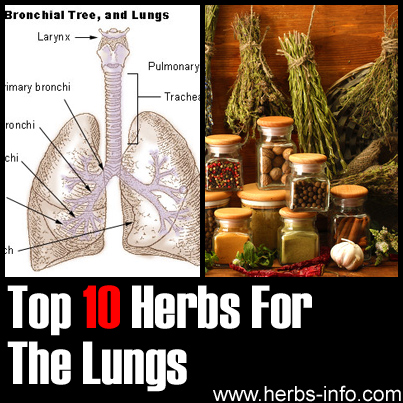 Everyone knows the importance of lungs because of their vital function of providing the body with oxygen and expelling carbon dioxide wastes. Aside from facilitating this exchange and acting as a cushion for your heart, the lungs also filter out small blood clots along your veins. [1]

Yet, even though we are aware of the lung's important functions, increasing air pollution and poor breathing conditions are causing lungs more difficulty than ever before. [2] Moreover, smoking, vitamin A deficiencies, certain over-the-counter cold medications and even traumatic experiences have led to common lung conditions like asthma, emphysema, bronchitis, tuberculosis, pulmonary edema, pneumonia and cancer. In fact, the American Lung Association reported that lung cancer is the leading cancer killer today. [1]

However, there are herbs like those listed below that specifically promote healthier functioning lungs. They act by aiding the processes of the mucous membrane for smoother gas exchange, stimulating lung tissue secretion to protect the membranes and adequately moisten the air, improving brain operations that control breathing and boosting blood circulation throughout lung tissues. [3]

Top 10 Herbs For The Lungs

Both the flower and leaves of mullein are favorite natural remedies because they have been successfully used to combat colds, bronchitis, flu, emphysema and laryngitis among others. [1] Mullein has been found by herbal experts to contain saponines that soothe bronchial spasms and clear out sticky phlegm and thick mucus. Also as a mild sedative, mullein has thought to fight inflamed nerves along the respiratory tract and relieve pain. [3] Furthermore, a study conducted in 2013 found evidence that mullein may potentially possess antitumor and antihyperlipidemic properties. [18]

Considered to be a demulcent herb which contains a great deal of vegetable gum to lubricate surfaces, licorice likewise softens and moistens irritated or inflamed mucous membranes and reduces the occurrence of spasms that trigger coughing. [3] A recent study showed that licochalcone A, a flavonoid in licorice root known for its antimicrobial property, also promotes anti-inflammatory activities that prevent cancer cell proliferation and improve acute lung injuries. The active ingredients in licorice significantly drive down inflammatory cells, dryness and protein leakage. [4]

Research on this herb's medicinal properties has been extensive. This herb is also thought to have beneficial effects on the lungs. For example, a 2012 experiment on dogs undergoing hypothermic cardiopulmonary bypass showed gingko biloba extract stimulates systematic inflammatory responses in lung tissue. [5]

This is an anti-microbial herb known to fight pathogenic microorganisms while strengthening the body's immune system. Echinacea works by activating white blood cell production and aggressiveness. [3] Studies that investigated the effects of the rhinovirus demonstrated how Echinacea can reverse the infection caused by this virus in humans and improve mucous secretion. Likewise, experts believe Echinacea may reduce mucous production during colds. [6]

Like Echinacea, rosemary is an anti-microbial herb that contains potent oils which have antiseptic, antibacterial and anti-fungal properties. Herbal practitioners have long used rosemary for alleviating colds, sore throats, flu, coughs, bronchitis and chest infections. [3] One of the components of rosemary is carnosol which, in 2011 was evaluated for its anti-lung cancer properties. Researchers in Chicago have found carnosol to possess selective toxicity towards cancer cells without destroying non-tumorigenic cells. It was also found to be well-tolerated when given to animals. [7]

Considered to be the world's fastest growing tree with over 700 varieties and 300 species, eucalyptus is plentiful and has many medicinal purposes. The oil derived from this tree has been used to treat various respiratory conditions including influenza, meningitis, common colds, fever, sore throat, sinusitis and bronchitis. Eucalyptus is believed to have powerful antiseptic, expectorant, vermifuge, analgesic, decongestant, anti-inflammatory, antispasmodic and antiviral properties, several of which can benefit the lungs. [8]

Eucalyptus is also believed to be beneficial for the lungs because of its cineole content. This active ingredient acts as a powerful agent that eases coughs and fights various types of respiratory problems. In fact, one study claimed that consuming 200 grams of cineole three times a day can help improve the symptoms of viral sinusitis. One study conducted in Spain further claimed that eucalyptus has anti-inflammatory properties because of its natural ability to inhibit the production of nitric oxide. Eucalyptus is believed to have antioxidant properties that strengthen the immune system during illness and helps the body fight infections. [9]

Lastly, a study conducted in 2012 found that eucalyptus extract may have anti-proliferation effects on cancerous cells. [19]

Irish Moss is an amazing herb that is believed to be capable of treating a host of respiratory illnesses. In fact, it is one of the core ingredients of many prescription drugs used to treat bronchitis, coughs and other lung problems. In addition to the fact that this herb is an excellent source of magnesium, iodine, sodium and calcium, Irish moss is noted for its anti-viral properties that help fight mumps and influenza B viruses. [10]

Irish moss is also known for its anti-inflammatory, demulcent and expectorant properties. It is even used to speed up recuperation from illnesses like pneumonia and tuberculosis. [11] For thousands of years, Chinese herbalists have been using Irish moss to treat respiratory illnesses like colds, flus, pneumonias, dry coughs, and sore throats. Irish moss is also capable of abating the symptoms of common colds and flus. In addition to its ability to relieve dry coughs, Irish moss is known to contain potassium chloride that dissolves catharrs, which are responsible for the congestion commonly associated with coughs. [12]

Known for its anise-like aroma, hyssop is a fragrant herb that is well known for its beneficial effects on the lungs. Hyssop contains expectorant properties that are thought to eliminate congestion caused by sinusitis and other viral infections. Furthermore, this herb has antioxidant, anti-inflammatory and diaphoretic properties that are known to help reduce fever and rid the body of unwanted toxins. [13]

When taken as a syrup, hyssop is believed to be an effective reliever of stubborn coughs and other pulmonary infections. In ancient times, this herb was prescribed to resolve asthma, stomach aches, nasal catarrh and pleurisy. Today, hyssop is understood to have antiviral properties and to relax peripheral blood vessels. [14]

Slippery elm is thought to be an herb with several medicinal qualities. In particular, slippery elm is an excellent herb for treating the respiratory ailments. This herb contains a perfect blend of anti-inflammatory, antiseptic, mucilage, diuretic, emollient, laxative and expectorant properties which can assist the lungs. It is believed to treat bronchitis, bleeding within the lungs, and coughs. It can also be used to soothe mucous membranes and the entire respiratory system in general. [15]

This herb also contains anti-allergenic and antiseptic properties which can be effective for those suffering from asthma. By softening mucous membranes in the nose, slippery elm offers immense relief from various respiratory conditions. [16] Lastly, slippery elm has an overall calming and refreshing quality that can be useful in many situations. [20]

Known for its healing benefits, coltsfoot is a powerful herb that can be very beneficial to the lungs. Widely cultivated in Asia and Europe, coltsfoot makes an excellent remedy for whooping cough, common colds, and other types of lung ailments. In general, this herb is thought to be capable of relieving the symptoms of bronchitis. Furthermore, it has been found to heal mucous membranes, and as a potent expectorant, it helps the body get rid of excess mucus. Coltsfoot's anti-inflammatory effects enable the fast recovery of infected and irritated lungs. [17] A coltsfoot tea is believed to combat emphysema, benign coughing and asthma attacks caused by allergies. [21]

[4] Licochalcone a inhibits lipopolysaccharide-induced inflammatory response in vitro and in vivo. http://www.ncbi.nlm.nih.gov/pubmed/22400806