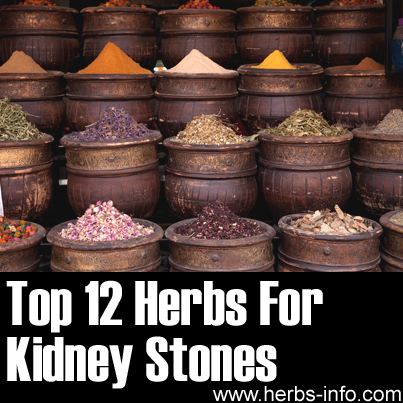 Kidney stones are hard crystallized deposits composed of calcium, uric acid and amino acid cysteine. [1] Their sizes may range from as small as a grain of sand which is easily passed out of the body with urine, to as big as a golf ball which may block the urinary tract. They may form due to fluid insufficiency, chronic urinary tract infections, genetic disorders or factors like poor diet. [2]

While kidney stones may not sound as bad as kidney failure, they nonetheless are renowned for their potential to cause excruciating pain - and can prevent your kidneys from effectively getting rid of impurities from your blood stream. [3]

As part of a natural solution, herbs may be used to dissolve kidney stones or even prevent their formation in the first place. Medicinal plants may help by encouraging the flow of urine and relieving the irritated walls of the urinary tract. [2] Below are 1012 herbs and fruits that have been considered valuable in alleviating the woes of kidney stones:

Spanish scientists in 1994 studied the effects of seven plants including horsetail in preventing and treating kidney stone formation. Using female rats, they confirmed the beneficial effects of horsetail infusion on kidney stone due to certain disinfecting action. [4] Moreover, horsetail has been found to help reduce incidence of bleeding as a result of kidney stones [1] and may act as a diuretic by drinking its tea. [3]

Both doctors and scientists agree that the juice as well as the seeds of the pomegranate plant can serve as natural remedies of kidney stones because of the herb's natural acerbic and caustic properties. [3] Experiments investigating crystal formation among rat kidneys show moderate to high doses of pomegranate juice can have inhibitory effects on renal tubular cell injury and oxidative stress. [5]

This plant has gained recognition in Germany as a potent treatment for kidney stones and other urinary tract diseases. [1] Experts that studied this plant discovered a complex spectrum of mechanisms that are anti-inflammatory, antimicrobial, antispasmodic and analgesic in alleviating infections and inflammations, preventing kidney stones and removing urinary gravel, without any drug-related side effects. [6]

The roots of dandelion have been traditionally used for managing the symptoms associated with urinary stones. Aside from easing pain, organic dandelion root has also been shown to clean the urinary tract. Experts believe that taking at least 500 milligrams of this organic root twice a day offer optimal results. [3]

Widely recognized for its culinary benefits, parsley is also considered as one of the best herbs for the treatment of kidney stones because of its kidney-cleansing properties. According to research, parsley contains two potent ingredients, myristicin and apiol, which are found to have diuretic properties. By increasing one’s urine volume, the risk for kidney stone significantly decreases. There are even studies claiming that parsley has the natural ability to eliminate kidney stones, though clinical evidence is yet to be established. Experiments in rats exhibit the therapeutic effects of parsley aerial parts and roots in reducing calcium oxalate deposits. [7] Moreover, fresh parsley has been found to be an excellent diuretic to flush out waste products like urea and other acidic metabolites. [1]

Known for its deobstruent, astringent, refrigerant and diuretic properties, plantain is considered as one of the best natural remedies for kidney stones. In general, plantain works best on the lungs, liver, bladder and kidneys. In traditional medicine, this herb is used to treat different sorts of urinary and kidney problems which include bloody urine, cloudy urine, prostatitis and even kidney stones. [9]

Noted for its long history as a treatment for various sorts of urinary problems, cranberries also proved to be effective in treating kidney stones. In addition to its ability to treat and prevent UTI, cranberries are also believed to be beneficial in the bladder.

Considered as one of the best natural treatments for kidney stones, consumption of large amount of watermelon on a daily basis helps in cleansing the kidneys. Furthermore, it is effective in preventing the formation of kidney stones. [14]

Known for its diuretic properties, watermelon is capable of increasing the amount of urine excreted by the body. Increased urine secretion usually results to lesser risks for kidney stone formation. Research further revealed that this fruit makes an excellent source of potassium that is beneficial in dissolving kidney stones, easing pain associated with it, and of course, helping the body in eliminating them. [15]

The Spanish name of this herb Chanca Piedra literally means "stone breaker" - so this should give you an indication that this herb has a tradition of use for just this purpose. It has a history of use in Ayurveda and Brazilian folk medicine - and is considered to be valuable in various conditions of the kidneys and urinary tract. It also has a history of use in treating liver complaints including jaudice and hepatitis B.

Some scientific studies have been performed in order to assess the potential of Chanca Piedra for addressing kidney stones. A 2004 study found that it normalized elevated calcium levels in calcium stone forming patients. [16] Even more interesting - a 2006 human trial on 150 kidney stone patients over 6 months found that those using the herb had a statistically significant reduction in stones and an absolute lack of side effects. [17]

The name is a total giveaway! Gravel root is the common name for Eutrochium - a genus of plants native to Eastern North America. According to the author Hemmerly, this plant was a traditional remedy used by the Native Americans for kidney stones. [19]

While these herbs have shown promise in preventing and reducing urinary stones, herbal formulations should not be perceived as a sole treatment for varying degrees of kidney stone formation. More extreme cases would require drug intervention and possibly even ESWL (extracorporeal shock wave lithotripsy). But even in such cases, clinical trials have shown the effectiveness of herbal preparations in protecting against renal damage. Medicinal herbs are thought to be able to promote stronger kidneys amid ESWL while shortening the recovery time among patients. [8] This page is not medical advice or a recommendation to self-medicate.

[5] Effects of pomegranate juice on hyperoxaluria-induced oxidative stress in the rat kidneys. http://www.ncbi.nlm.nih.gov/pubmed/19839830