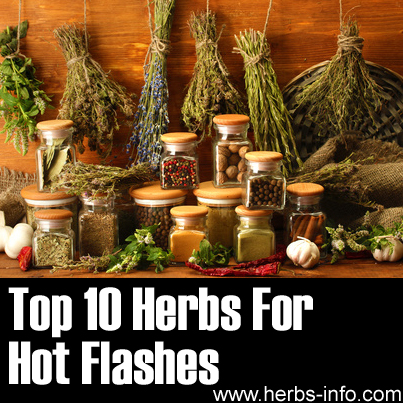 It's often said that nearing retirement age is a liberating experience for women especially once children have all grown up and you can start focusing on yourself. But liberating is hardly a term to describe symptoms of menopause once you go through it. While different women may have different symptoms, research shows that up to 85% of women report having hot flashes particularly within the first 2 years of menopause. [1]

The exact cause behind hot flashes remains unknown although studies suggest it can be due to hormonal changes produced by the hypothalamus. These hot flashes can occur anywhere along a woman's face or upper body and may range from warmth to sweating to chills [2] which can severely affect mood, concentration and sleep. [3]

Hormonal therapy is often used to relieve hot flashes but this has been linked to increased risk for breast cancer, encouraging many to turn towards natural remedies like herbs instead. [4] While most researches on hot flashes are focused on treatment, [3] studies conducted are still relatively young and limited. Nonetheless, certain herbs do show promising results such as these 10:

When Austrian researchers from the Division of Obstetrics and Gynaecology assessed the effects of red clover isoflavone supplements in 109 postmenopausal women by randomly giving them 2 capsules everyday for 3 months, they found that compared to those under placebo, red clover intake reduced overall menopausal symptoms with no apparent side effects. [5] The phyto-estrogen enriched isoflavone was found to decrease both intensity and frequency of hot flashes. [1]

One study that involved giving 71 participants 1 tablet of fresh sage leaves everyday for a 2 month period demonstrated sage's clinical value in the treatment of hot flashes and other menopausal symptoms. Sage was shown to significantly decrease intensity of hot flashes by 50% after 4 weeks use and as much as 64% after 8 weeks use. Frequency of hot flashes was also found to reduce week after week within the 8 week period. [6] Organic sage may also be taken by drinking few cups of its tea daily. [1]

Like red clover, soy products are rich in isoflavones that correct hormone imbalance. In a systematic review of 277 publications and 17 randomized controlled trials, analyses revealed that isoflavones in soybean greatly decreased hot flashes severity by 26.2% as opposed to those taking placebo. [7] However, since the safety and efficacy of some soy supplements remain questionable, doctors still recommend to obtain soy from natural sources like tofu and soy milk. [2]

Although this is a popular herbal remedy for menopause, experts are still trying to unlock the mechanisms behind its efficacy resulting in various studies with mixed if not inconclusive results. But one expert in medicinal plants mentioned that this herb stimulated the hypothalamus-- the same area that triggers hot flashes. [8] Other studies associate black cohosh to the pharmaceutical estrogen in alleviating hot flashes while one study revealed it can prevent excessive sweating. [1]

Although this herb has also produced researches with debatable results, several clinical trials have found it to be enriched with lignans which are confirmed to stabilize estrogen levels and possess antioxidant properties. Consequently, one French study of over 58,000 postmenopausal women found that flaxseed intake can reduce breast cancer risks. [3]

Although many data on botanical treatments for hot flashes are sometimes controversial with some findings seemingly based on subjective opinions, scientists are making progress in isolating active compounds that can eventually result in formulating treatments with more hopeful results. [4]

Unfortunately, hot flashes are just one of the major discomforts which women have to go through on their menopausal stage. The availability of herbal plants like ginseng comes very handy in dealing with hot flashes. Researchers concluded that ginseng supplementation plays a major role in stimulating the ovaries which result to the production of estrogen. Normally, women with low levels of estrogen suffer from hot flashes. [9]

In a study conducted in United Kingdom, researchers concluded that consumption of licorice helps in reducing the possibility of hot flashes to occur by almost 80%. As mentioned earlier, low level of estrogen in the body is usually blamed for the occurrence of this symptom.

Scientific studies show that licorice root is an excellent source of phytoestrogen isoflavonoid which is considered as a good plant-based source of estrogen. This compound normally triggers the occurrence of fluctuating hormones in women. [10]

Traditionally used as medicine, tonic and spice in Japan, China and Korea, dong quai was found to be an excellent herb for women suffering from hot flashes. Often referred as the female ginseng, dong quai is believed to be an good herb for hot flashes primarily because of its estrogen-like effects. [11] In a scientific study conducted in Israel, results showed that almost half of the respondents have noticed the disappearance of hot flashes. [12]

Hot flashes are normally accompanied by a couple of other discomforting symptoms. Motherwort is an excellent herb that doesn’t just help in dealing hot flashes. It also aids in driving away other disturbing menopausal symptoms like dizziness and light-headedness. It actually helps in reducing the frequency, duration and severity of hot flashes. [13]

Since the 1600s, motherwort has been in used by the European culture due to its calming effects which makes it an excellent natural solution to insomnia, anxiety, depression and of course, hot flashes. [14]

For decades, natural and alternative medicine practitioners have been using damiana in helping people deal with symptoms of menopause, especially hot flashes. Insufficient levels of progesterone and estrogen in the body are the usual subject of blame whenever hot flashes begin to pester women. Reduction in the level of these hormones usually triggers the hypothalamus to be confused whether a woman feels cold or hot. [15]

[5] The effect of red clover isoflavone supplementation over vasomotor and menopausal symptoms in postmenopausal women. http://www.ncbi.nlm.nih.gov/pubmed/21870906