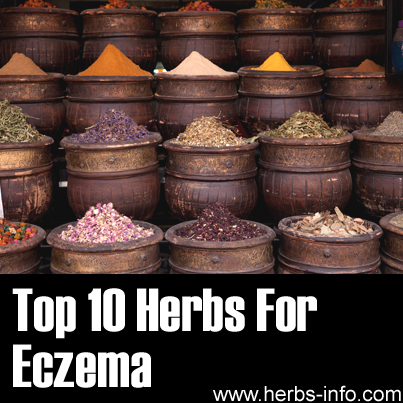 The World Health Organization reports that 80% of the world's population utilize medicinal plants to treat various disorders and recently, herbs have represented a major health source for pharmaceutical companies. It is no wonder then that even for lesions like eczema, there are herbs that can be applied to successfully fight it. [1]

An inflammatory skin disease often found along the elbows, knees, wrists, neck and scalp, eczema is characterized by the appearance of itchy crusts and dry patches or in more extreme cases, presence of oozing water discharge and even bleeding. [2] Sometimes, itching can be accompanied by a stinging sensation or pimples. [3]

While the exact cause of eczema remains unknown or is sometimes associated to an allergic reaction, , [2] particular herbs have been proven effective to provide relief from it:

Pentaherb is not a single herb but a combination of 5 common traditional herbs in capsule form which researchers have formulated: Japanese honeysuckle, root bark of tree peony, peppermint, the underground stem of the atractylodes herb and bark from an Amur cork tree. A 2007 study among Chinese patients concluded pentaherb formulation to reduce patients' need for conventional treatments like steroids and to improve the quality of life of those with eczema. The evidence suggests these herbs possess anti-inflammatory properties which hold promise in treating eczema. [4]

The leaves of burdock have been found effective for scaling skin commonly found in eczema. [2] If using burdock seeds, herbalists recommend to combine with garlic and glycerine for optimal results. [3] But perhaps the most important part of this healthy, nutritive and therapeutic plant for eczema is its roots which scientists have found to detoxify the blood, promote blood circulation to the skin surface to improve skin quality and texture. The roots also contain active antioxidants and antibiotic compounds. [5]

Back in 1989, the effectiveness of evening primrose oil in alleviating eczema has already been confirmed in a meta-analysis of randomized, double-blind, placebo-controlled clinical trials. Additional recent testings and re-analysis of 26 clinical studies including 1207 patients confirmed the herb's beneficial effects on itching, crusting, edema and redness which have all improved within 4 to 8 weeks after treatment. [6] Because of evening primrose's power to heal lesions and crusting, experts suggest liberally applying primrose ointment throughout the day, after showering and before sleeping. [2]

Various clinical tests that demonstrated centella asiatica as an important medicinal herb have dubbed it as a "potential herbal cure-all". Aside from healing wounds, this plant shows promise in treating various skin conditions like leprosy, varicose ulcers, psoriasis and of course, eczema. Triterpenoid and saponins are the main components of centella believed to be responsible for its wide array of therapeutic actions. [7]

The root extracts of licorice are known to be one of the best herbal agents for combating eczema. [2] Laboratory tests showed that skin eruptions like dermatitis, eczema, pruritus and cysts have been helped by application of topical preparation of licorice extract by reducing erythema, edema and itching after 2 weeks. [8]

While further tests still need to confirm evidence that shows the value of herbal medications in treating eczema, what does remain clear is that there appears to be clinical, scientific and pharmalogical basis for the application of herbal preparations in fighting this common skin disorder. [1]

Also known as goose grass, sweet woodruff and catch weed, cleavers are excellent herbs for eczema. When made into tea, it can be used as skin wash that helps in healing scrapes and cuts, treating skin diseases, as well as in improving skin complexion. [9]

According to research, cleavers’ ability to eliminate waste substances and toxic from the body through the excretory system of the body makes it very effective in treating eczema, psoriasis and other skin ailments. When used as tinctures or skin wash, cleavers help patients in relieving the symptoms of eczema such as blisters, dryness, cracked skin and itchiness. [10]

A wonderful herb that is known for its healing benefits, comfrey roots are also used in treating eczema. This herb contains allantoin, a potent substance known for its ability to accelerate skin and wound healing. When applied directly on skin, comfrey leaves help in preventing scarring and minimizing infections.

Allantoin is also believed to be efficient and effective in keeping the skin smooth and soft. Furthermore, comfrey contains large amounts of Vitamin A that helps relieve common symptoms of eczema like itchiness and dryness. Comfrey can also be applied as ointment or poultice by chopping and mixing it with olive oil. [11]

A native herb from Brazil and other parts of South America, copaiba balsam is normally yellow brown in color and it emits earthy, soft and pleasant aroma. For thousands of years, this herb has been used in treating tetanus, infection, psoriasis and eczema. [13]

Sometimes known as Indian Pennywort which is noted for its diuretic, anti-inflammatory, and antioxidant properties, gotu kola also makes an excellent herb for eczema. It actually plays a major role in rejuvenating the skin and body tissues just by stimulating the synthesis of collagen. [14]

This herb has been in used by Asian, Chinese and Indian cultures for thousands of years in treating diverse sorts of skin ailments which include psoriasis, leprosy, acne, and eczema. For itchy and irritated skin, gotu kola leaves are boiled in a half cup of water until its volume is reduced into half. After removing the leaves, sesame or almond oil is added until water has evaporated leaving you with herbalized oil. The oil is applied onto the affected area. [15]

Also called lady’s slipper, lady’s eardrops and spotted-touch-me-not, the juice of jewel weed is widely used in the treatment of different kinds of skin ailments including eczema, rash, ringworm, athlete’s foot and poison ivy. To ease the itchiness caused by eczema, just crush the leaves and apply it on the affected area. [17]

[5] A review of the pharmacological effects of Arctium lappa (burdock). http://www.ncbi.nlm.nih.gov/pubmed/?term=burdock%2C+eczema

[6] 2006 study- A meta-analysis of randomized, placebo-controlled clinical trials of Efamol evening primrose oil in atopic eczema. Where do we go from here in light of more recent discoveries? http://www.ncbi.nlm.nih.gov/pubmed/17168667

[8] The treatment of atopic dermatitis with licorice gel. http://www.ncbi.nlm.nih.gov/pubmed/14522625