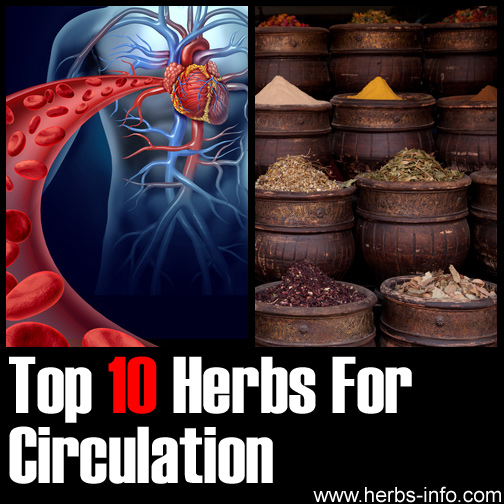 Since blood, flowing throughout your body, provides oxygen, warmth and nutritional support to all cellular activities, it is possible to imagine what conditions may arise as a result of poor blood circulation. If you experience cold fingers and toes that turn reddish, or numb extremities or swollen ankles, knees or knuckles, then bad circulation might be the problem. Worse, poor blood circulation be more serious - increasing your risk for stroke, heart attack or deep vein thrombosis. [1] Good circulation is one of the many keys to a healthy body. [2]

While poor circulation may result from conditions such as diabetes, kidney, liver or heart diseases, [1] it is reported that it can just as easily come from simple deficiencies in your diet and lifestyle - where you are not getting the proper nutrients due to unhealthy foods or even habits like smoking. [3] There are some simple herbal remedies that can be found in your kitchen, garden or local store, which have been indicated by various studies to have potential to improve circulatory health. Here are some of the best ones - these herbs are reported to supplement energy, promote warmth and in effect, activate blood circulation, improve the heart and overall functioning:

This is one of the top herbs recommended by herbal practitioners to promote improved blood circulation, allowing blood to flow normally to the extremities. It has been shown to support the circulatory system, cleanse the blood of bad cholesterol , [4] and to aid ailments like arthritis and rheumatoid arthritis. The warm sensation you normally experience when eating cayenne is primarily because of cayenne's property of being a central circulatory stimulant that dilates the blood vessels, as described by herbalists. [3]

If you find cayenne too spicy, then the gentler ginger can equally act as a "warming" agent. [1] Ginger has been shown to cause slight blood thinning which facilitates better blood circulation throughout the body. [4] In a 2002 investigative study, Japanese experts discovered that the herbal medicine Dai-kenchu-to possessed positive effects on intestinal blood flow mainly due to the presence of dried ginger as its ingredient and its corresponding active compound, [6]-shogaol. This suggests as well the clinical value of ginger in treating intestinal-related disorders. [5]

A true traditional remedy: Used for centuries to protect the heart against coronary diseases, irregular heartbeats and mild congestive heart failure, [1] hawthorn is found to regulate heart rhythm and to strengthen the heart's muscle so as to add the force of contraction and improve blood output, making this herb likewise effective to lower blood pressure. [3] This herb contains antioxidant flavonoids like oligomeric procyandins that are thought to play a role in dilating blood vessels, protecting the blood vessels from free radical damage, and of course, in improving blood flow throughout the body. Although this herb is slightly uncommon in use, don't ignore it: Experts believe it is the bioflavonoids like rutin and quercetin that are responsible for hawthorn's ability to improve blood circulation. [2]

Another basic herb for improving circulation. Researchers find that raw garlic in particular, contains high amounts of allicin which boosts blood flow and acts as a diuretic to excrete excess fluids and reduce the swelling that often accompanies bad circulation. [1] Aside from allicin, scientists in Britain discovered the vasodilatory activities of interleukin in garlic tablets to increase tissue blood flow, supporting evidence that regular garlic supplementation can reduce cardiovascular risks. [6]

Like ginger, gingko exhibits blood thinning properties to decrease the bonding of blood platelets and increase circulation. Extensive studies conducted on gingko have found this herb to dilate blood vessels. [4] Clinical trials have also exhibited gingko's positive effects on intermittent claudication, a condition that results in painful walking because of poor circulation. [1]

When it comes to improving blood circulation, rosemary is reported to be one of the most amazing herbs you can find today. Normally used as a culinary herb and for aromatherapy, rosemary is known for its circulatory effects that mostly benefit people diagnosed with sciatica, neuralgia and muscular pain just by increasing the flow of blood to the affected area. It actually helps in soothing sore muscles as well as in rejuvenating the skin. Rosemary is considered as one of the excellent supplementary treatments for circulatory and rheumatic problems. [8]

Also known for its ability to improve blood sugar level, cinnamon is also considered a valuable herb for improving circulation. It has been used in Chinese Medicine since old times as a "warming" agent to improve circulation and digestion. Several studies have documented its cardiovascular effects. [9]

Research shows that thicker blood can reduce circulation which may lead to the development of various cardiovascular disorders. This herb contains compound coumarin that is known for its blood thinning properties - though too high an intake of coumarin is not advised. [10]

Did you know that eating one raw onion every day may be beneficial to your heart? An onion a day helps in regulating blood circulation thereby reducing your susceptibility to cardiovascular diseases. Onions have been existing for millions of years now and since then, its medicinal effects have been widely recognized.

More than its culinary benefits, onions are best known for its medicinal purposes. This spice contains active compounds and antioxidants that benefit the human body. In a study conducted at Texas A&M University AgriLife Extension, it was found out that onions are packed with very potent compounds that inhibit blood clots, reduce hypertension and improve blood circulation. [11]

Best recognized for its wide white flowers, strong stems and feathery leaves, yarrow is an amazing herb that proves to be beneficial in improving blood circulation. Yarrow actually works by dilating the capillaries and toning the blood vessels. Together with lime blossom and hawthorn, yarrow makes an effective treatment for high blood pressure as it also capable of preventing blood clots. The herb is also used to treat hemorrhoids and varicose veins. [12]

Yarrow is known for its anti-inflammatory, diuretic and antiseptic effects. It guides the blood to move from where it should be, and of course, it is capable of decongesting the capillaries, stimulating peripheral circulation and dilating the blood vessels. [13]

Commonly known as an excellent treatment to toothache, prickly ash also proves to be effective in improving blood circulation. It helps toothache sufferers by increasing blood flow to the affected area. By increasing the flow of blood to the target area, faster healing takes place. [14]

The bark of prickly ash has been widely used in treating various illnesses associated with very poor blood circulation which include cold hands and feet, varicose veins, and leg cramps. Prickly ash can also be used to pains and joint aches associated with arthritis and chronic rheumatism. Aside from its ability to treat paralytic conditions, prickly ash is also used to enhance peripheral lymphatic and blood circulation in the body. Also, it mildly stimulates the central nervous system that improves the flow of blood throughout the body. [15]

[5] The herbal medicine Dai-kenchu-to and one of its active components [6]-shogaol increase intestinal blood flow in rats. http://www.ncbi.nlm.nih.gov/pubmed/12148698