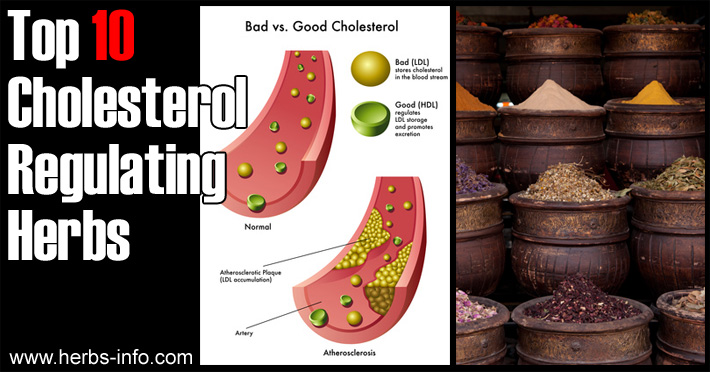 Once there is too much "bad cholesterol" in the body, the excess accumulates along the arterial walls - which eventually narrows them and obstructs the flow of blood to the heart, leading to potential cardiovascular disorders. Whether high cholesterol is due to poor diet, genes, obesity, sedentary lifestyle, age, alcohol or stress, its complications are the leading causes of death in the US today. [1]

With controversy surrounding particular cholesterol lowering drugs recently, the interest in herbal alternatives has consequently heightened. [1] Here are 10 of the most common herbs considered beneficial towards cholesterol level management:

Extensive studies have been conducted on garlic for its cholesterol regulating abilities and some studies suggest it can decrease blood cholesterol by a few percentage points. [2] Other researchers found that the more frequent the intake of garlic, the greater the reduction in cholesterol levels. Moreover, garlic was also shown to prevent blood clots which, for someone with high cholesterol, is beneficial as clots formed around the brain and heart are highly fatal. [3]

Research suggests that curcumin, a potent extract from this culinary spice protects against atherosclerosis. This is supported by a recent finding which demonstrated that curcumin promotes activities suppressing cholesterol accumulation. [4] In particular, the roots of turmeric lower cholesterol levels to drive down the risks of serious coronary problems. [3]

Although ginger is often used as a flavoring herb in various dishes, it is also one of the commonly used herbs widely studied for its value in preventing coronary diseases by reducing cholesterol levels. [2] Likewise, in a 2010 experiment designed to assess the antihypercholesterolaemic effects of ginger on 48 hypercholesterolaemic rat models, results revealed that ginger infusion after 2 and 4 weeks of treatment significantly lowered lipid profile parameters. [6]

Scientists believe the leaves of artichoke contain a unique fiber that is able to block cholesterol absorption in the body thus aiding to decrease production of LDL particles. [3] Clinical studies that evaluated the effects of artichoke leaf extracts on lipid patterns exhibited how this herb plays a key role in managing mild hypercholesterolaemia among overweight sufferers after 8 weeks by increasing HDL and decreasing total cholesterol and LDL cholesterol. [7]

You may not have heard of this but alfalfa herb is actually one of the most outstanding herbs you can find that is capable of lowering your cholesterol level. This herb is clinically proven to be effective in lowering the level of bad cholesterol in the body.

In a study conducted to determine the effects of alfalfa on atherosclerosis, results showed that intake of 40 grams of alfalfa three times a day have significant effects on the level of LDL. The patient’s bad cholesterol level was reduced by as much 18%. For subjects who stopped taking alfalfa along the way, researchers have found out that their cholesterol level eventually rose up again. This led them to further conclude that incorporating alfalfa into one’s diet is one of the most effective ways in stabilizing one’s cholesterol level. [8]

Some studies revealed that alfalfa has saponin content that helps in blocking the absorption of cholesterol as well as in preventing the formation of atherosclerotic plaques. Alfalfa contains chemicals and fibers that prevent cholesterol from getting absorbed by the blood vessels. Moreover, while the herb works on reducing the level of bad cholesterol, it doesn’t affect the level of high density lipoprotein which is better known as good cholesterol. [9]

High level of bad cholesterol can bring adverse effects to the body. Studies show that capsicum is capable of lowering the level of low density lipoprotein (LDL), also known as bad cholesterol, in the body. This lowers one’s susceptibility to heart attack, strokes and other cardiovascular diseases associated with high levels of LDL.

According to research, intake of capsicum is beneficial in enhancing metabolism as well as burning fat before it is absorbed by the body and stored them as fats. Capsicum is also known for its ability to suppress the appetite. The herb is a good source of antioxidants that are noted for their ability to eradicate free radicals which can increase the level of cholesterol in the body. Furthermore, capsicum is capable of converting homocysteine into molecules that help lower cholesterol. [10]

For decades, psyllium has been widely used to treat digestive and gastrointestinal disorders. In recent years, scientists have found out that psyllium makes an excellent herb that helps in controlling the level of bad cholesterol in the body. Researchers believe that psyllium is capable of stimulating the conversion of cholesterol into bile acid, as well in triggering the excretion of bile acid. [11]

Widely used in Ayurvedic medicine, guggul is a powerful substance derived from mukul myrrh tree that is used to stabilize the level of good and bad cholesterol in the body. According to research, guggul works by preventing the liver from releasing excessive amounts of LDL or bad cholesterol into the bloodstream. Furthermore, some research claimed that this herb affects thyroid functions and bile acid production which are thought to have effects on the level of cholesterol in the body. [13]

If you are trying to bring your cholesterol into a stabilized level, then licorice is one of the best herbs you can get. Numerous have been conducted to determine the effects of licorice on lowering the level of bad cholesterol in the body. Most of the results of the study prove licorice to be an outstanding herb.

The American Cancer Society claimed that licorice is an excellent source of flavonoids that are effective in lowering the level of LDL, total cholesterol and triglycerides. [14] Furthermore, this herb prevents the accumulation of cholesterol along the arterial walls. One of its active ingredients, glabridin, plays a vital role in delaying the oxidation of bad cholesterol which is considered as one of the major factors that contribute to increased level of cholesterol in the arteries. As you may have already known, high level of cholesterol in the bloodstream significantly increases one’s susceptibility to major cardiovascular disorders. [15]

Note - this article is not medical advice nor a recommendation to self medicate. For more info please see text at foot of page.

[4] Molecular mechanism of curcumin on the suppression of cholesterol accumulation in macrophage foam cells and atherosclerosis. http://www.ncbi.nlm.nih.gov/pubmed/22648616