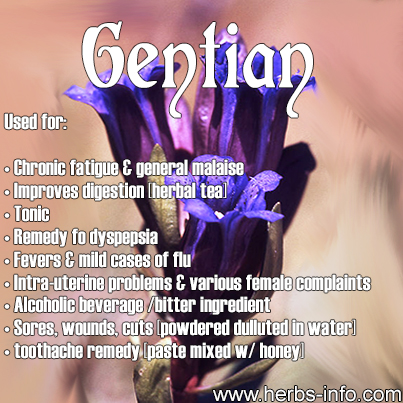 Names of Gentian, Past and Present

The gentians are a plant species that have been employed as both medicinal and ornamental plants since ancient times. Typically referred to simply as 'gentian', it actually encompasses different types of plants under the same species, varying depending upon distinct qualities or features (i. e. colour, flower-form, place of origin, etc.), each of which possessing distinct medicinal properties quite different from, but at the same time complimentary to, and similar in properties to others of its species so much so that many distinct gentians may be employed as substitutes for others of its species, where such plants as mentioned prove to be unavailable. 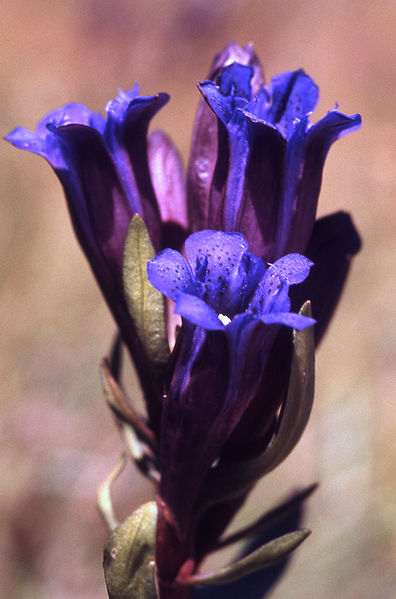 The gentian family of plants are typically shrub-like in form, with distinct flowers that are chiefly notable for the vibrancy of their hue. The most popular types of gentian are those that possess startling blue colours that range from very rich and deep, to pale and almost lavender-like in hue. Gentians are not restricted to this colour palate however, as various other species sport different colours such as yellow, white, ivory, and carnation among others. [1]

Generally thought to be a native of the Mediterranean, gentians grow profusely, albeit in select areas, in Asia and a large part of the European continent. Despite its notorious sensitivity to its environment (it is reputedly incapable of growing outside of its native soil, or in climates that are not in accordance to its 'constitution'), gentians can prove to be a tad hardy in their own right and have become in recent years, quite popular horticultural hobby plants, chiefly cultivated for its gaudy flowers more than for its medicinal uses.

As a medicinal plant, gentian is most commonly employed as a primary ingredient for bitter tonics due to its notoriously bitter nature – a feature which encompasses the whole of the plant. Despite this, it is the root of the plant which is most often chosen for medicinal uses although some older herbals do suggest the use of the flowers, stalks, and even the leaves of the plant from time to time. Such parts aside, gentian is typically harvested or cultivated (for medicinal uses) chiefly for its root, which is usually used in its dry state, either in whole or powdered form.

Employed whole, gentian root is typically brewed into a mild to somewhat strong decoction and used as a vivifying tonic that is said to treat cases of chronic fatigue and general malaise. Brewed into a strong tea, gentian can be drunk prior to, or after meals as a digestif, as it is said to whet the appetite and improve digestion. Gentian root tea is commonly taken in very mild consistencies as a general tonic, owing to its immuno-boosting properties and intra-purgative effects (it cancels out its own potential side-effects), making it among the safest tonics to have daily. Gentian root tea is also a time-tested remedy for dyspepsia, fevers, and mild cases of flu, intra-uterine problems, and various female complaints. [2]

The most popular use of gentian however is as a primary component in the creation of bitters – a type of bitter alcoholic beverage typically made from distilled spirits that have been infused with one or several kinds of known bitter herbs, spices, and plant compounds. When made into a bitter, whole gentian root is typically allowed to macerate in an alcoholic solution, usually straight neutral spirits, although brandy, whiskey, rum, and vodka are more common choices. Generally a tincture by nature, gentian bitters are not ingested as tinctures-proper, and therefore have to be flavoured lest it be far too unpalatable to drink. Because of this, gentian bitters are usually paired with aromatics such as orange peel, lemon peel, cloves, cardamom, or cinnamon, and consumed in shot glasses as would be any other alcoholic beverage. Due to its potency, only very minute amounts (typically a dollop or so) is drunk prior to, and / or after mealtimes, as it is chiefly made to act as a digestif and a stomachic. Despite being used chiefly for its tonic and stomachic properties, bitters made with gentian root may also be employed as a febrifuge, emmenagogue, antiseptic, and anthelmintic whether in its pure or diluted form. [3]

Due to its antiseptic properties, whole gentian root may even be powdered and diluted with water into a thick paste which can then be applied to sores, open wounds, or minor cuts to help facilitate in faster healing and to stave off infection. This paste may even be employed as a quick toothache remedy if laced sufficiently with copious amounts of honey. The honey-and-gentian mixture may further be employed (if mixed with ground and powdered ginger root and ground and powdered cloves) as a cough remedy and ready expectorant, although its efficiency when employed as such isn't always reliable.

Gentian root may even be made into a type of alcoholic beverage by itself, typically by creating a macerated mass of whole gentian roots in sterile water which is then left to ferment, and is afterwards distilled. This alcoholic beverage is quite popular in Eastern European regions and areas where strong Germanic influence presides, where many varieties of such beverages can be found.

In magick, gentian root plays a large role in the creation of love spells, as it is believed to attract love. In voodoo and hoodoo, as well as in folkloric magick, gentian root is typically used in fixing spells and conjures to help attract lovers, and is a major component is some mojo bags, which are specially made for just such a purpose. Gentian root may also be burnt as an incense, typically accompanied with prayers for love or for the strengthening of romance, as it is believed that it is highly effective for attracting good luck in matters of the heart. [4]

While gentian root is generally safe when employed as a medicine in moderate dosages, it can be dangerous if consumed in excess and may be very harmful for pregnant or lactating women. To err on the side of caution, it is advised that one take gentian as a medicine or supplement for no more than three weeks, and then to discontinue use. In very small amounts (and if employed rarely) gentian bitters can prove to be excellent tonics, provided that they are not used by individuals who have a known history of renal problems, stomach ulcers, or severe hepatic problems. [5]