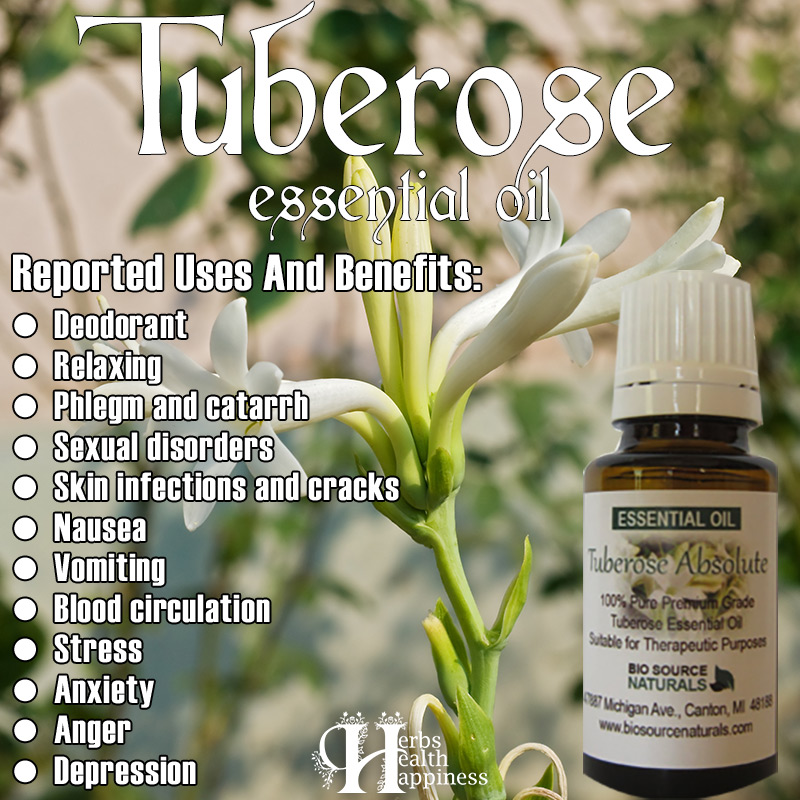 The Tuberose, Polianthes tuberosa is a night-blooming garden plant. The creamy-white, waxy tuberose flower is renowned for its sweet fragrance and has been used in perfumery for centuries. [1] The tuberose plant grows from bulbs and likes warm, sunny growing conditions. [2] The plant gains its name from the Latin word Tuberosa, meaning 'tuberous', on account of its tuberous root system. There are around 12 species of tuberose plant. [1]

The heady and popular fragrance of tuberose was traditionally extracted by enfleurage, the same method used to extract the fragrance of jasmine. The enfleurage was labor intensive and was used because the heat of steam distillation would denature the delicate aroma of the flowers. Owing to the labor-intensive nature of this extraction, in modern times tuberose is extracted using solvent extraction - such as via hexane (which creates tuberose absolute) or CO2 extraction. 3600 pounds of tuberose flowers are needed to make 1 pound of absolute, meaning that tuberose commands a high price as a perfume ingredient. [3] It's said that extraction of tuberose using chemical solvents leads to a lesser quality fragrance owing to the possibility of traces of solvent residue remaining in the absolute; but that this extraction method is often performed owing to commercial factors.

Tuberose is grown in many countries around the world and has been considered a sacred flower to some cultures, being associated with traditional rituals and ceremonies. It was used in traditional Hawaiian leis (garlands) and in India has been used prominently in various rituals including wedding ceremonies. [1]

Tuberose is reported by [1] to be native to Mexico, however Oxford English Dictionary has it as native to the East Indies. [4] According to OED, the earliest reference to the plant in English literature is from John Evelyn's 1664 Kalendarium Hortense ["The Garden Calendar"] which indicates clearly that it was a popular garden plant by that time.

Tuberose as anti-mosquito agent: The mosquito Culex quinquefasciatus is recognized in the medical profession and epidemiological studies as the notorious vector of lymphatic filariasis, [7] a disease caused by an infection with nematodes (roundworms) of the family Filariodidea and characterized by an altered lymphatic system and an abnormal enlargement of body parts, causing pain and severe disability. According to the World Health Organization, the disease, also known as elephantiasis, threatens nearly 1.4 billion people in 73 countries worldwide, with over 120 million people currently being infected. [8] One study had demonstrated that extracts from fresh mature tuberose buds are a noteworthy and safe anti-mosquito agent with excellent activity against C. quinquefasciatus. In addition, it appeared that the chloroform/methanol (1:1, v/v) solvent extract of tuberose buds afforded protection against C. quinquefasciatus for 4 hours. Also, the said extract provided a 5-hour protection against the assault of Anopheles stephensi, an important malaria vector for both Plasmodium falciparum and P. vivax. [9]

The bright green leaves clustered at the base of the tuberose plant possess kaempferol and tuberolide. [6] Kaempferol is a flavonoid with a wide range of pharmacological activities, as numerous preclinical studies suggest, including antioxidant, anti-inflammatory, antimicrobial, anticancer, cardioprotective, neuroprotective, antidiabetic, anti-osteoporotic, estrogenic/antiestrogenic, anxiolytic, analgesic, and antiallergic activities. [11]

Indole was also isolated from different tuberose varieties cultivated under tropical climate at a concentration range of 0.36-2.15%. [12] This is an important research finding because indole is a unique aromatic compound common as a constituent of fragrances and as a precursor to various pharmaceuticals. [13] Moreover, in the study of Rakthaworn et al. (2009), methyl benzoate was identified as the main chemical constituent in enfleurage absolutes, whereas benzyl benzoate and pentacosane were identified as the main chemical components in hexane and petroleum ether absolutes, respectively, as analyzed by gas chromatography-mass spectrometry. [14] Methyl benzoate is an organic compound in the form of a colorless liquid with a pleasant smell, [15] whereas benzyl benzoate is a topically administered drug used in the treatment for lice and scabies infestations. [16]

A few further papers have reported on glycosides and polysaccharides found in tuberose. [17][18][19]

Is Tuberose an Aphrodisiac?

It is written all over the modern internet (particularly in marketing materials for tuberose products) that tuberose is an aphrodisiac. For example - "Tuberose Body Scrub will enhance your libido whilst fighting premature aging." "Tuberose Shower Gel will assist in healing damaged skin and will give your libido a boost. " "Tuberose essential oil has strong aphrodisiac property." etc. However such statements typically do not cite any scientific reference, being content to repeat the popular paradigm without investigation. Although in one sense the enduring popularity of tuberose as an alluring perfume ingredient attests to its power to generate attraction, we are also wary of unreferenced claims and must endeavour to look deeper to find both origin of these ideas. 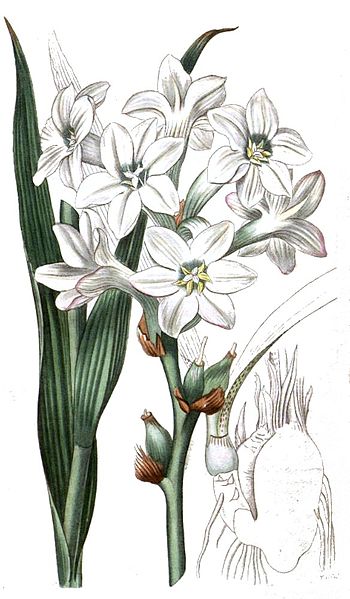 According to [3], Tuberose has had a long tradition of being aphrodisiac in India since old times, and it is said that unmarried girls should not breathe its scent after dark. Ayurveda lists several medicinal qualities of tuberose, and it is lkely from the ayurvedic tradition that these ideas originate.

In Western literature, there is no mention of Tuberose having aphrodisiac quality prior to 1900. The earliest reference I can find in western literature is from the 1905 "Health [a Monthly Devoted to the Cause and Cure of Disease]", Volume 19, which has the following interesting statement in an article entitled "Danger In House Plants":

"Frequently we find many different flowers in the same room, the various perfumes producing an effect analogous to that developed by aromatic substances. Such odors produce an excitement of the carnal instinct; that is, they possess a true and peculiar aphrodisiac action. Among flowers which particularly produce this effect may be included the hyacinth, tuberose, carnation, pelargonia, heliotrope, pancratia, lilacs, many orchids, and various varieties of the acacia."

There is of course something of a blurred boundary between a sensuous fragrance and one which actually excites desire; however there are several other scent ingredients, such as the various animal musks, regarding which writers are quite explicit in stating that they are aphrodisiac. With tuberose, this is not found in the old literature of the West.

In general, the lack of support from science for an aphrodisiac scent is fairly common. Cinnamon and the various animal pheromones such as musk are two 'aphrodisiac scents' that have been investigated; however for the majority of flower-based scents, it seems we must rely on the historical 'reputation' of the scent, together with its popularity as a perfume ingredient, to make our best judgement as to whether such fragrances actually have some function as attractants. It's also worth considering that perfume ingredients combine with the body's natural aroma, possibly altering perceived or subconscious reaction to the scent. Additionally, scent has a strong connection with memory: Many people the world over will attest to the fact that a lover's perfume, years later, will 'bring the memory back' more strongly than reminders from other senses. 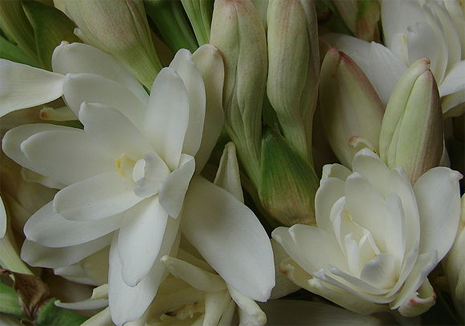