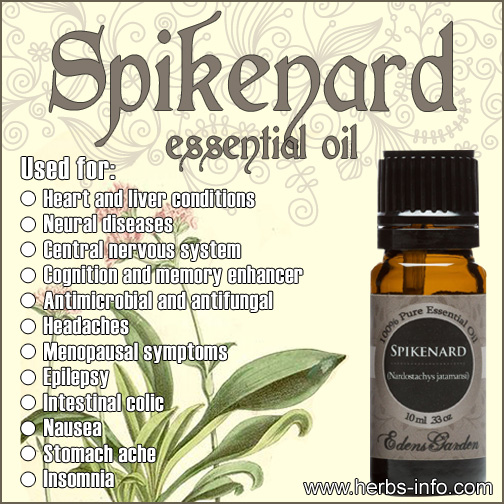 Spikenard (Nardostachys jatamansi) is a flowering plant species common in the Himalayas, China, and India. This plant (sometimes referred to as nard, nardin, and muskroot) is highly valued globally for the extremely aromatic essential oil that can be extracted from its crushed rhizomes. [1] Spikenard essential oil appears amber-colored to greenish with a slightly viscous consistency and an earthy, woodlike aroma that is somewhat musty. [2] Aromatherapists describe spikenard essential oil as balancing and grounding - something that helps one to do "inward reflection." [3]

Medically speaking, the rhizomes (underground stems) are the spikenard's most important asset, having been used since antiquity in indigenous medicine systems for their therapeutic potential. In fact, spikenard has been used for its medicinal benefits and fragrance since the ancient days of Indians, Greeks, Arabs, Romans, and Egyptians. [4] In India, spikenard rhizomes and roots have been used as an anticonvulsant Ayurvedic drug and as an antistress agent. [5] They are used in Ayurvedic medicine to treat epilepsy, hysteria, syncope, and mental weakness. [6] Animal studies and, to some extent, clinical trials have justified these Ayurvedic claims and provided evidence for such too.

Spikenard rhizomes and roots have a very prominent medicinal reputation, not to mention a rich medicinal history. Multiple formulations can be derived from them, and their use has been recorded and mentioned in the Holy Bible and Quran themselves. [4] Spikenard has been pointed out in the Song of Solomon twice, for example - and even in Homer's Iliad (Book 18) - and is, in fact, celebrated as the symbol of St. Joseph by the Catholic Church. [1] However, because of the extensive exploitation on the herb for its medicinal value and habitat degradation, spikenard is now considered "critically endangered." [4]

Spikenard is reported to provide protection against conditions associated with the heart and liver and is a common name in the treatment of neural diseases. [4] Spikenard is not only cardioprotective and hepatoprotective but also hypolipidemic; it has an effect on the central nervous system too, ranging from being sedative to being nootropic (i.e., cognition and memory enhancer). [7]

Spikenard As Antioxidant: Some studies have also demonstrated the antioxidant property of spikenard essential oil. The study results of Parveen et al. (2011) have revealed the ability of spikenard essential oil to reduce the stable radical 2,2-diphenyl-1-picrylhydrazyl (DPPH) to yellow-colored DPPH-H. A DPPH scavenging effect of 99.04% was noted moreover. [9] Such antioxidant activity known to be exerted by spikenard essential oil seems to be responsible for the oil's antistress property, as claimed by Lyle et al. (2009). In their study, spikenard hydroethanolic extract (70%) manifested significant antioxidant activity, as measured by free radical scavenging activity. Most importantly, the spikenard extract reversed the observed increase in lipid peroxidation and nitric oxide levels and the decrease in catalase activity in the brains of Wistar rats. It also has a negative effect on gastric ulcerations, reversing biochemical marker alterations occurring in gastric ulceration induced by stress. [11]

Spikenard vs. Liver / Cardiovascular damage: True enough spikenard essential oil has long been part of the Ayurvedic and Unani systems of medicine for centuries to treat or manage a diversity of ailments, but its favorable effects on the cardiovascular system and the liver are the icing on the cake. Ali, Ansari, Jafry, Kabeer, and Diwakar (2000) furnished concrete evidence supporting the hepatoprotective action of spikenard. In their study, oral pretreatment of 50% ethanolic spikenard extract to experimental rats (three days at a dose of 800 mg/kg body weight) resulted in an amelioration of the liver damage among rats. Here, liver damage was induced by thioacetamide, an organosulfur hepatotoxic compound. In addition, a significant decrease in elevated levels of serum transaminases (aminotransferases) and alkaline phosphatase and an increase in overall survival were produced from spikenard treatment to rats. [14]

Spikenard essential oil contains sesquiterpene as well as coumarins, lignans, neolignans, and alkaloids. [4] Sesquiterpenes that can be isolated from spikenard include jatamansone (or valeranone), nardostachone, nardin, nardal, nardol, valerenal, and patchouli alcohol. [7]