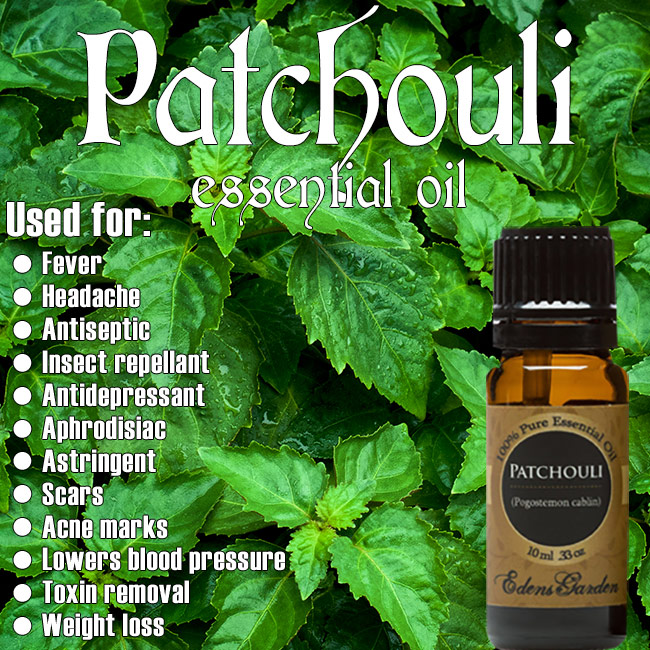 Patchouli - also known as Patchouly, Pachouli (English); Pachapat (Bengali); Pucha-Pat, Pucha Path, Peholi (Hindu); Pogostemon cablin, Pogostemon patchouly (Latin); Guang Huo Xiang (Pinyin); Pachouchi (West American rural dialect) - is a bushy, perennial, aromatic herbal plant in the same family as mint. It grows up to three feet in height. Patchouli was originally native to tropical parts of Asia such as Burma and Malaysia [1] , but is now cultivated in many parts of Asia (including China and India) and Africa. [2]

Patchouli is strongly scented and the leaves give off scent when rubbed. The leaves are used to obtain the essential oil, which is extracted by steam distillation. This uniquely scented, easily recognizable oil is used in the perfume industry, in the manufacture of incense and scented products, and also as a scent in its own right. [2]

Patchouli has a long history of use in herbal medicine systems of Asia, most particularly being used to treat fevers and headaches, as an antidepressant, as an antiseptic and (so it's claimed by modern sources) as an aphrodisiac. [3]

Patchouli also has a history of use as an insect repellent, and at one time fabrics that originated in India invariably arrived in the West permeated with the scent of Patchouli.

In the 18th and 19th centuries, silks from China were packaged together with Patchouli leaves as a way to protect them from moths that hatched from eggs that may have been laid on the fabric. [3]

The earliest references to Patchouli I can find in the western corpus comes from early 19th century France. The 1826 "Journal de Chimie Medicale, de Pharmacie et de Toxicologie, Volume 2" (Journal of Medical Chemistry, Pharmacy and Toxicology") [4] describes the 28th of January's session of the Royal Academy of Medicine (presumably in Paris), where "a plant called patchouli, which can be put in linen to drive away insects, and has a pungent smell" is introduced. It seems clear that it was new at the time and that the Academy had the intention of investigating its properties.

Patchouli drawing from the Pharmaceutical Journal
of 1849 - showing leaf, flowering top and flower.

By the 1840's, Patchouli begins to appear in English botanical and medical journals, and is described as being fashionable in perfumery.

Richard Folkard Jr.'s glorious 1884 "Plant Lore, Legends, and Lyrics: Embracing the Myths, Traditions, Superstitions, and Folk-lore of the Plant Kingdom" states that the Mussulmans of India burn ood in all their religious ceremonies - an incense comprised of Sandalwood, Aloe, Patchouli and other herbs.

Patchouli is often seen listed as one of the "aphrodisiac scents". A search of Pubmed revealed 58 medical papers mentioning patchouli; however, none of these investigated any aphrodisiac qualities of the essential oil.

What's curious is that patchouli's popularity within fashionable subculture, and its reputation as an aphrodisiac, suddenly go through the roof in the 1970's, as far as can be judged from literature. Yet despite trawling through much of this material, I can find no true source reference.

Nancy L. Nickell's 1999 Nature's Aphrodisiacs states boldly: "Patchouli has been used as an aphrodisiac for centuries. It was a favorite ingredient for love potions and charms and was reputed to have magical powers... according to aromatherapists, patchouli affects the pituitary gland... patchouli's aphrodisiac properties only work, of course, if both partners like it." Nickell makes no mention of where this information was obtained - but after much research I have found no ancient source whatsoever that makes any aphrodisiac claim for Patchouli.