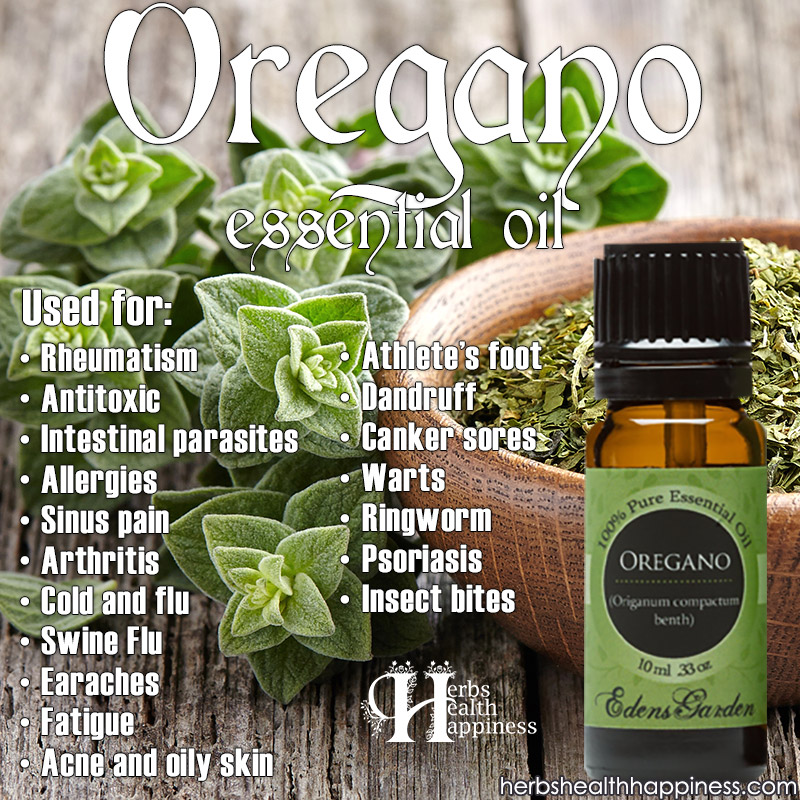 Oregano(Origanum vulgare, O. onites, O. minutiflorum, O. majorana) is a perennial herb with pinkish to purplish flowers and opposite, spade-shaped, olive-green leaves, which have an aromatic, warm, and slightly bitter but flavorful taste that has earned this herb its culinary reputation in different Italian-American, Asian, European, and Middle East cuisines. The herb has been used medicinally since the time of Hippocrates in ancient Greece where it was employed as an antiseptic to treat wounds and bacterial infections as well as a remedy for respiratory and gastrointestinal maladies. [1]

Oregano essential oil is considered as one of the most powerful and versatile essential oils, possessing strong immunity-enhancing, antimicrobial, antiviral, and anti-inflammatory properties. [2] Steam distillation method is utilized to extract the essential oil from oregano leaves. Oregano essential oil has a light yellow to reddish yellow color, a thin consistency, and strong, spicy, camphor-like aroma with a middle perfumery note. [3]

Aside from the aforementioned attributes of oregano essential oil, this essential oil has also been purported to exert the following therapeutically beneficial properties: analgesic, antirheumatic, antispasmodic, antitoxic, carminative, choleretic, diaphoretic, diuretic, emmenagogue, expectorant, febrifuge, rubefacient, stimulant, and tonic. [3] Moreover, oregano essential oil has been orally administered to deal with intestinal parasites, allergies, sinus pain, arthritis, cold and flu, swine flu, earaches, and fatigue and is applied on the skin as an alternative remedy for acne, athlete's foot, oily skin, dandruff, canker sores, warts, ringworm, psoriasis, and insect bites. [4] While this broad spectrum of effects apparently is promising, more positive findings and data from studies need to be provided to scientifically support these claims.

Oregano essential oil is generally safe and nontoxic, especially when taken or applied in prescribed medicinal amounts. Mild effects such as stomach upset and allergic reaction in those with hypersensitivity to plants belonging to the mint family may occur though, so caution is still recommended. As not enough is known regarding the safety of oregano when taken by mouth during pregnancy and breast-feeding, pregnant and lactating women are advised to avoid its use. [4]

More on Oregano as antibacterial: Becerril, Nerin, and Gomez-Lus (2012) investigated the susceptibility of 48 clinical isolates and 12 reference strains of Gram-negative bacilli to oregano essential oil, cinnamon essential oil, and the combination of both essential oils as well as the predisposition of these bacterial strains to develop resistance against these essential oils. The results of their study demonstrated that indeed these Gram-negative bacilli are susceptible to both oregano essential oil and cinnamon essential oil, with only Serratia marcescens, Morganella morganii, and Proteus mirabilis being capable of either altering their antibiotic resistance profile or increasing their resistance to the two essential oils. [8] In a 2007 study from Shiraz University, Iran, oregano essential oil exhibited a negative effect on the growth and survival of Yersinia enterocolitica (the causative agent of yersiniosis)—and to a lesser extent L. monocytogenes—in a broth culture system. [9] Correspondingly, Elgayyar, Draughon, Golden, and Mount (2001), utilizing paper disc agar diffusion method to test growth inhibition and antibiotic susceptibility discs as control, studied the action of selected herb and essential oils with respect to the growth and survival of a variety of microorganisms. They had determined that oregano essential oil completely hampered the growth and survival of each of the test strains, which include L. monocytogenes, Staphylococcus aureus, E. coli O:157:H7, Y. enterocolitica, P. aeruginosa, Lactobacillus plantarum, Aspergillus niger, Geotrichum, and Rhodotorula, and displayed the greatest inhibition among the essential oils tested. [10]

Analyses from gas chromatography with flame ionization detector (GC-FID) and gas chromatography–mass spectrometry (GC–MS), as conducted by El Babili et al. (2011), have identified carvacrol as the predominant compound (36.46%) in oregano essential oil, followed by thymol (29.74%) and p-cymene (24.31%). Extracts from the aerial parts of oregano have also been determined to be characterized by various chemical families, namely polyphenols (such as gallic acid), tannins (such as catechin), anthocyanins (such as cyanidin), and flavonoids (such as quercetin). [12] High Carvacrol content is considered a "quality marker" for oregano oil; note that Origanum vulgare is often higher in carvacrol than other Origanum species.