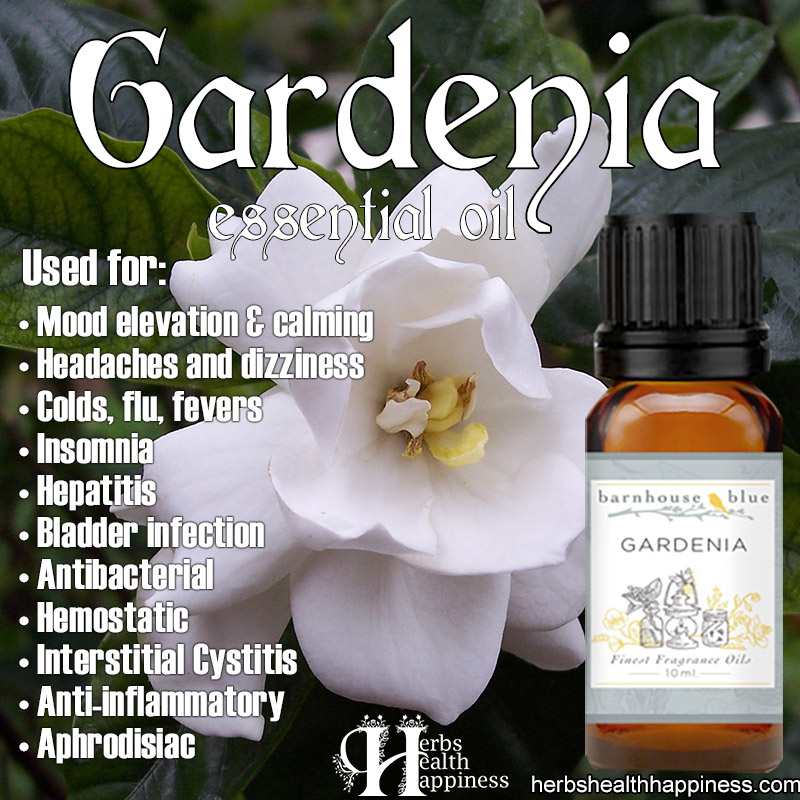 Gardenia is a genus of flowering plants with 142 species. Originally native to tropical and subtropical regions, Gardenia is grown as an ornamental shrub or house plant, and is well known for its large white flowers and their appealing scent. Owing to their tropical origins, Gardenias like humid conditions. Some Gardenia species can grow up to 49 feet tall. [1]

Another essential oil fragrance that has for a long time been used in perfumery, the exotic, sweet scent of Gardenia has long been said to have aphrodisiac qualities. Gardenia flowers are sometimes used in bridal bouquets, and in many cultures are considered to have a "feminine" scent, however in some places they are traditionally worn as buttonhole flowers by men.

Gardenia essential oil is used in aromatherapy, and as a scent in lotions, candles and other products. As with Jasmine, Gardenia has a delicate scent that would be ruined by steam distillation; therefore the essential oil was traditionally produced by the labour-intensive process of enfleurage (see the Jasmine page for a description of this process) - and such oils (if you can find them) are still considered to be of high quality.

Gardenia essential oil is listed on aromatherapy websites as having a wide array of therapeutic qualities: It is considered to have calming, antidepressant / uplifting qualities, and be good for headaches or dizziness. [2] A few drops of gardenia added to a bath are thought to be beneficial for insomnia. [3]

Gardenia is considered useful in wound healing - in addition to being considered antibacterial, it has been reported hemostatic - able to assist stopping bleeding when applied (diluted). [3]

Gardenia jasminoides has been listed by the USDA Agricultural Research Service phytochemical and ethnobotanical database as being helpful with pain, nose bleeds, fever, and influenza; in healing wounds and reducing swelling; and in treating mastitis, hepatitis and the hematuria that accompanies bladder infection. [2]

One also often sees Gardenia Absolute; meaning that the oil was extracted by solvent extraction (typically hexane or cyclohexane). Absolutes were originally intended for use in perfumery, however, they are increasingly being used in aromatherapy despite concerns over residues of chemical solvents, and even over the addition of synthetic ingredients. [4]

As different species of Gardenia are sometimes used in the derivation of the essential oil, it is to be expected that the fragrance may vary somewhat. Gardenia jasminoides, Gardenia grandiflora, Gardenia taitensis or other Gardenia varieties may be observed in Gardenia essential oil on the marketplace.

Like many of the other fragrant essential oils made from flowers, the price of the genuine essential oil is high, and so synthetic imitations and adulterations abound. It's said that true Gardenia, even as an absolute, is hard to find - although I have seen Gardenia for sale online which is stated to have been extracted via enfleurage using palm oil and cane sugar alcohol. [5] It's important to ascertain whether a Gardenia essential oil is genuine, especially if it is intended for use in aromatherapy - and many products that claim to be Gardenia or Gardenia-scented, are not suitable for aromatherapy due to either adulteration or chemical solvent extraction.

As with other essential oils, the use of certified organic products is considered good practice, as pesticide residues have been known to taint non-organic essential oils. This has been said to be a serious safety issue although many of the effects remain unknown and difficult to ascertain. [6]

For the creative Gardenia grower: I found one interesting article on how to make Gardenia Essential Oil by enfleurage. [7]

Turning to the world of science and medicine, we find that Gardenia has been the subject of some scientific investigation - and a search of Pubmed yielded 363 results from medical papers that included Gardenia.

Gardenia as sedative and anti-seizure: Gardenia shows some interesting qualities and medical potential. A 2008 study from the Department of Pharmacology at Yan'an University, China, showed that Gardenia oil produced sedative, hypnotic and antiseizure effects in mice, and that these effects were increased by combining the oil with jujube (Zizyphus zizyphus) seed oil. [9]

Gardenia vs. Interstitial Cystitis: Gardenia, along with herbs Cornus, Curculigo, rhubarb, Psoralea, and Rehmannia, in tea given twice a day for 6 days a week for 3 months and then once a day was explored in a pilot study. Of the 25 patients with interstitial cystitis who completed the study, 82% had reported a significant decrease in bladder and pelvic pain after three months, and 80% had decreased frequency. [12] Such an herbal tea can be used to treat interstitial cystitis in patients who are referred for herbal therapy as a treatment alternative.

Gardenia as antibacterial: Gardenia essential oil possesses promising bactericidal activity, especially against Campylobacter jejuni and Listeria monocytogenes. The bactericidal activity (BA50) values of gardenia essential oil against C. jejuni and L. monocytogenes were reported to be ranging from 0.003 to 0.009 and from 0.057 to 0.092, respectively. [13]

Gardenia as antioxidant: A number of research studies focus their investigations on antioxidants, chemicals that can inhibit the formation of, or at least neutralize, reactive molecules such as reactive oxygen species (ROS) and reactive nitrogen species (RNS). An excess or overaccumulation of such reactive molecules results in oxidative stress and, by extension, several diseases associated with it. In connection with this, the study of Kalim, Bhattacharyya, Banerjee, and Chattopadhyay (2010) evidenced the antioxidant activity of Gardenia gummifera, one of the plants routinely employed in the Unani system of medicine. [14] Free radical scavenging is a defensive mechanism wherein a vitamin, mineral, or enzyme eliminates the free radicals in the body before they can cause significant cell damage. [15]

A variety of free radical scavengers have been identified and screened in gardenia fruit extracts. Of these free radical scavengers in gardenia fruit extract, caffeoylquinic acids, dicaffeoylquinic acids, and 4-sinapoyl-5-caffeoylquinic acid were recognized as dominant, with 3,5-dicaffeoylquinic acid being the most potent antioxidant with a Trolox equivalent antioxidant capacity (TEAC) value of 1.1 mM. [16] Furthermore, geniposide from the fruits of G. jasminoides has also been shown to enhance the glutathione content in rat livers and to inhibit P450 3A monooxygenase. [11] Glutathione is an important immune system peptide and antioxidant that aids in determining the modulation of immune response, including cytokine production. It helps prevent the damage induced by ROS such as free radicals and peroxides to cellular components. [18]

Gardenia essential oil contains a good amount of geniposide and genipin, its chief components. [10] It also contains crocin, [19] an antioxidant that suppresses the formation of peroxidized lipids and the oxidative stress in neurons. [20] Novel terpenoids, namely, gardenate A; 2-hydroxyethyl gardenamide A; (1R,7R,8S,10R)-7,8,11-trihydroxyguai-4-en-3-one 8-O-beta-D-glucopyranoside; and jasminoside F, can also be isolated from gardenia. [19]

Is Gardenia An Aphrodisiac?

Gardenia is often described in modern times as one of the "aphrodisiac" essential oils - able to assist with libido problems for both women and men. It has a long history of use in perfumery - however I can find no historical mention of any aphrodisiac qualities ascribed to it either in Pubmed or in any written literature earlier than 1900 (Google Book search).

As with many of the other popular, fragrant essential oils, one does not have to look too far to see that many of them are regarded as aphrodisiac. A large number of web pages now cheerfully reproduce these claims without citing the sources of their information. In this regard, Gardenia fares similarly to others such as Jasmine.

One thing worthy of note is that the fruit of Gardenia grandiflora is used to obtain Crocin, a substance which also occurs significantly in Saffron, itself another purported aphrodisiac. [17]

[15] Antioxidant. Wikipedia. Retrieved 10 May 2013 from http://en.wikipedia.org/wiki/Antioxidant

[18] Glutathione. Wikipedia. Retrieved 10 May 2013 from http://en.wikipedia.org/wiki/Glutathione