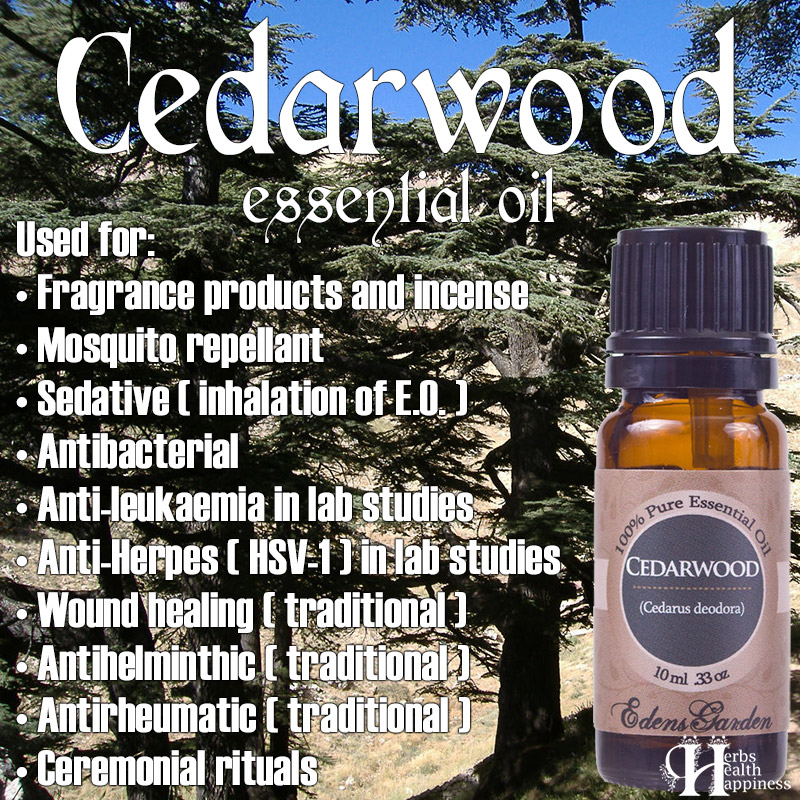 Cedarwood is the name given to the essential oil (or other products) of the cedar tree. [1] Cedar trees are coniferous trees which were once native to forests of the western Himalayas and the Mediterranean, but they have been very popular for centuries as ornamental trees on account of their unique, majestic form and are now distributed widely across the world. [2]

In several regions, including Lebanon, cedars were once widespread - but sadly, owing to the popularity of the wood as both construction and fragrance material, they have been heavily over-exploited throughout the ages; and some are under some environmental protection. [3]

It's said that the oil of the Lebanon Cedar, Cedrus libani was one of the very early essential oils to be extracted by humans. It was used in ancient times, such as by perfumers of ancient Egypt. [4] The Egyptians appear to have been very fond of cedarwood - using it for temples, ships, coffins (on account of its resistance to decay) and even using the oil in the mummification process. It was also used by the Egyptians in incense and perfumery. Cedarwood was also used medicinally in ancient times and is still employed by some traditional medicinal systems. [5]

There are a number of varieties of Cedar tree growing in different parts of the world; hence cedarwood essential oil may not originate from the exact same species - and, as with sandalwood essential oil, there may be significant variation in the scent and molecular components present in different varieties. [6]

However (somewhat confusingly) you may also see "cedarwood" essential oil from Cupressus, Juniperus varieties, or from a number of other genera / species on the marketplace [7] - for example Calocedrus formosana (Taiwan incense-cedar) Cupressus funebris (Chinese Cedarwood), Juniperus ashei (Texas Cedarwood / Ashe Juniper), Juniperus virginiana (Virginia Cedarwood). [1] These oils will of course have their own unique aroma and the purchaser is advised to pay attention to the actual species Latin name, rather than the generic "Cedarwood" moniker. Also, as with other essential oils of which the genuine article is costly and rare, there may also be the possibility of substitution with the oil of a "similar" wood.

Cedarwood essential oils are traditionally steam distilled from the wood of the tree. In modern times sawdust and / or scraps of cedarwood created as a by-product of cedar timber processing may often be used. The heartwood of the cedar contains a higher amount of essential oil than the sapwood and it's worth noting that the part of the tree used - bark, leaves or wood - will also result in further variations in the oil composition. [8]

In modern times, supercritical CO2 / supecritical fluid extraction is another method that may be used and variation of extraction conditions (temperature and pressure) can also cause variations in the end product. [9]

Cedarwood has enduring popularity as a pleasing and alluring fragrance component, especially for male scents - and has been in use in perfumery for thousands of years. Cedarwood is also used widely as a fragrance in air fresheners, detergents, soaps, shaving products and moth repellants.

In perfume applications it is widely agreed that cedarwood blends extremely well with sandalwood, creating a classic "base note" for numerous fragrances. [4] Where cedarwood essential oil's aromatherapeutic qualities are listed, it is often stated that it is aphrodisiac. This correlates with the fact that it is often used as an ingredient in perfumery - particularly being associated with scented products for males. It appears however that the notion that cedarwood is an aphrodisiac fragrance may be a modern one, as it is not anywhere described as such in the old literature of the western world (via Google Books). This notion may however have some roots in one of the old traditional medicine systems.

Curiously, one source mentions that cedarwood is anti-aphrodisiac - "The Botanical Gazette", Volume 12 (1887) states:

"The odor of musk, represented in the vegetable world by Mimulus moschatus and some other species of the same genus, is a notorious aphrodisiac; while an element in the fragrance of camphor, frankincense and cedarwood has the opposite effect. Scarcely anybody will acknowledge that he likes the smell of musk, but nevertheless the perfumers regard it as a principal source of profit."

One thing to note about cedarwood essential oil - it is a powerful scent, and 'a little goes a long way'. Also, it's important that essential oils should not be put on the skin undiluted. 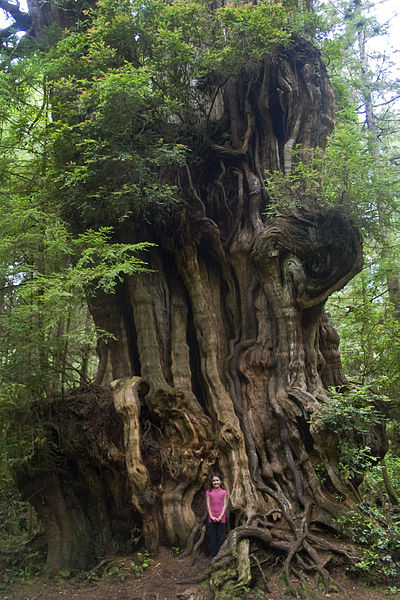 Turning to scientific research - cedarwood appears to have some interesting medicinal potential. According to ethnobotanical surveys, Juniperus species have been used as antihelmintic, diuretic, stimulant, antiseptic, carminative, stomachic, antirheumatic, antifungal, and for wound healing. [10] Cedrus libani has a long history of use in traditional medicine in the Lebanon.

Cedarwood as Sedative: Two 2003 scientific studies found cedrol, a component of cedarwood, to have a sedative effect upon inhalation. [11][12]

Cedarwood as Mosquito repellant:Essential oils from the species Cupressus benthamii ("Mexican White Cedar") and Chamaecyparis lawsoniana ("Port Orford Cedar" aka. Lawson Cypress) have been found by a 2013 study to have mosquito repellant activity equivalent to "Deet" insecticide (and some larvicidal activity). [13]

Cedarwood as Antibacterial: Essential oils from the species Cedrus atlantica were found by a 2005 study to have significant antibacterial activity against gram positive and gram negative bacteria. [14] Cedrus libani has also been found by studies to have antibacterial action.

[5] Richard Alan Miller, Iona Miller "The Magical and Ritual Use of Perfumes" - http://books.google.com/books?id=ksGRbzob-6MC&pg=PA51