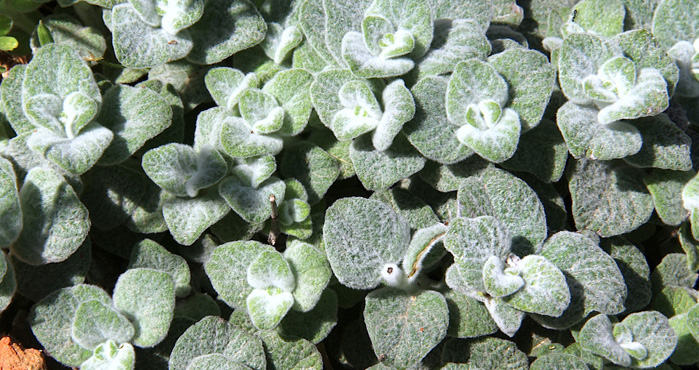 Dittany of Crete (Latin - Origanum dictamnus - is an herbaceous perennial plant belonging to the mint family, or Lamiaceae, which are well renowned in the culinary sphere for their aromatic parts. It is also referred to as Cretan dittany or hop marjoram and is a local endemic to the hilly and mountainous regions of the island of Crete, Greece—hence the name.

Dittany of Crete is an aromatic cushion-forming perennial plant that grows to a height of 20–30 cm and thrives in rocky areas and crevices located generally from 500 m to 1800 m above sea level. [1] Because of such habitant preference on mountainsides, wild dittany of Crete is indubitably difficult to get hold of, resulting in the traditional romantic belief that only a person truly and passionately in love can muster the courage to climb and gather Dittany shoots to be offered as love tokens. Presently, Dittany of Crete can be conveniently kept as an ornamental plant in hanging baskets, rockeries, or pots so long as it receives full sun exposure and is grown in dry, warm, slightly alkaline soil.

Dittany of Crete - History & Traditional Use

Krigas, Lazari, Maloupa, and Stikoudi (2015) claimed, in their study published in the International Journal of Gastronomy and Food Science, that Dittany of Crete is associated with a strong ancient mythological and historical context, from which a number of vernacular Greek names for Dittany of Crete derived. [2]

Several evidences attest to the herb’s long-standing traditional use by humans, including archaebotanical evidence of seeds of Dittany of Crete found during excavations in the Knossos palace near Heraklion, Crete, which date back to Minoan times (27th–15th century B.C.). Documents reveal that Dittany of Crete was originally dedicated to Diktynna, the ancient Cretan goddess of Mount Dikti where Zeus was supposedly born. This indicated that “dittany,” or “dictamos” in Greek, may have derived its name from the goddess Diktynna or from Mount Dikti. [3] Historically well-known Latin writers such as Cicero (2nd–1st century B.C.) and Virgil (1st century B.C.) linked the wound healing of the Trojan hero Aeneas to Dittany of Crete. [4]

The Herb Society of America (2005) mentioned the Cretan dittany as of limited culinary use; nevertheless, its inflorescences and leaves can be frequently added to salads, sauces, and vermouth and the plant’s dried leaves and extracts have been integrated in fish sauces and bitters. [5] It has been documented as well that the Benedictine and Trappistine monks extensively used dittany in liqueurs of medieval monasteries. [6]

In ancient times, the Greeks conventionally considered Dittany of Crete as a universal remedy and sought the plant for its therapeutic utility against common digestive ailments such as gastric ulcers and peptic system and spleen disorders, rheumatism, and gynecological disorders. [6] The nonwoody aboveground parts of dittany are used as a comminuted herb to prepare an infusion locally referred to as “vrastari” in Crete, Greece. The ancients also incorporated the herb in a tincture by decoction, which is applied on the skin. Some natives occasionally chew it crude against gingivitis, cough, and cold. [3]

The most outstanding “big names” in ancient Greek history have even been revealed to have documented a few accounts of dittany’s therapeutic power. For instance, Hippocrates (5th–4th century B.C.), the father of clinical medicine himself, administered the plant as cure to gastric complaints and tuberculosis and used it in poultices on wounds. Aristotle and then later Τheophrastus (4th–3rd century B.C.), Dioscorides (1st century A.D.), and Galen and Plutarch (1st–2nd century A.D.) mentioned dittany as a cure eaten by wild goats of Mount Ida, Crete, to heal their wounds created from poisoned arrows. The Greeks were not the only ones who held the tradition of using Dittany of Crete as an herbal medicine; it was also used by the Romans.

As mentioned previously, Dittany of Crete has accumulated over the years numerous vernacular names; most of these ancient names elucidate the plant’s curative properties. For example, its vernacular name “veloulko” or “velotoko,” originating from the term “velos,” or “arrow,” highlights Dittany’s ability to remedy wounds from arrows, and its other vernacular name “stomachohorto,” from the Greek term stomachos and horto, which means “stomach” and “herb,” respectively, originates from its therapeutic property to relieve stomachache. [2]

Hervala, Menounos, and Argyriadou (1987) similarly reported that the leaves of O. dictamnus have significant amounts of flavonoids and flavonoid glycosides, some of which demonstrate spasmolytic activity. The essential oil of dittany of Crete contains carvacrol, α- terpinene, p-cymene, caryophyllene, borneol, terpin1-en-4-ol, and carvacrol methyl ether as predominant compounds. [9]

Argyropoulou et al. (2014) distilled independently different parts of dittany of Crete and analyzed the essential oils by gas chromatography and gas chromatography–mass spectrometry. This study identified volatile components (the major ones presented in the table below), along with their corresponding composition percentages: [10]

A 2013 review on the medical importance of the genus Origanum details the various medicinal properties of dittany of Crete, particularly its antibacterial and antifungal attributes due to its high percentage of phenolic compounds (specifically, carvacrol, thymol, p-cymene, and their precursor c-terpinene). [8] The review further mentions that the plant can be used as a tonic and digestive aid and as treatment of mild kidney and liver disorders, obesity, and headaches. [8]

Another earlier study analyzed the essential oil of dittany of Crete by gas chromatography−mass spectrometry and provided scientific evidence on its high antimicrobial activity against eight strains of Gram-positive and Gram-negative bacteria. In this study, the high antimicrobial activity was attributed to carvacrol and thymol, two of the major components of the essential oil [12]. Carvacrol is also found in abundance in oregano.

Daferera, Ziogas, and Polissiou (2000) performed gas chromatography–mass spectrometry on the essential oils of a variety of Greek aromatic plants, including O. dictamus. The investigation found that O. dictamus essential oil is rich in phenolic compounds representing 78.0% of the total oil and that the radial growth, conidial germination, and production of Penicillium digitatum were inhibited entirely by O. dictamus essential oil at relatively low concentrations (250–400 microg/mL), with monoterpenes seemingly exerting more than an additive effect in fungal inhibition [13].

The carvacrol existing in Origanum essential oils is scientifically assumed to be what interferes in the release and/or synthesis of inflammatory mediators, such as prostanoids. This anti-inflammatory monoterpenoid phenol contributes appreciably to the wound-healing attribute of dittany of Crete and aids in the healing process of, for example, gastric ulcers. [8]

In a research evaluating the in vitro antioxidant activity of ethanol extracts acquired from 21 aromatic plants under the Lamiaceae family, the extract from O. dictamnus and ten other Greek aromatic plants exhibited comparable antioxidant activity with α-tocopherol [14]. Another study expressed that with respect to the extracts of O. microphyllum and O. vulgare subsp. hirtum, the ethyl acetate extract of O. dictamnus has the richest polyphenolic composition and highest values of antioxidant activity. In this 2014 study, the extracts of the three aforementioned Origanum species were partially fractionated through successive partition with ethyl acetate and n-butanol and all fractions gained were profiled for their major polyphenolic constituents through liquid chromatography-diode array–mass spectrometry [15]. These data support the ability of dittany of Crete to prevent cytotoxicity and tissue damage induced by oxygen radicals and hydrogen peroxide in diverse human diseases.

To date, we have not found reported health risks or potential danger associated with the administration of dittany of Crete as a medicinal herb: At the time of assessment of the Committee on Herbal Medicinal Products (HMPC), no side effects had been reported with dittany of Crete. [6] However, since this plant species has been subjected to limited phytochemical and pharmacological investigation, the usual caveats are still highly recommended, especially for pregnant and breastfeeding women and those using pharmaceutical medications.