Cilantro is both an herb and a spice (its leaves, seeds and roots are employed) that also goes by the name of Coriander (the names are in fact used interchangeably). Employed both for culinary and medicinal purposes since ancient times, cilantro is a very versatile herb. It was recorded in ancient herbals as having been used in the days of the pharaohs in ancient Egypt and has been popular ever since.

Cilantro typically grows wild, but it has been cultivated by many cultures in both the East and West, with the latter employing the practice for longer. It is typified by its uniquely fan-shaped leaves that may or may not show some kind of serration or 'teeth', as well as its tiny, white to pale-dun hued flowers accompanied by tiny dark-coloured fruits that, when dried, are referred to in cuisine as 'coriander seed'. Unlike other herbs, cilantro leaf is best used when fresh, as it loses both its aroma and its flavour when dried, frozen, or otherwise cut off from the stem of the plant. The fruit or seeds of the cilantro however are usually employed dried. [1]

The most common use of cilantro is as a culinary herb (when employing the leaves) typically as a condiment or a garnish. The seeds or fruit of the cilantro may be ground into a fine powder and integrated into soup-based dishes or mixed with other spices and some herbs to make a spice rub for meats.

Cilantro leaves make for a great addition, even in small amounts, to a wide variety of foods, and it possesses potent antioxidant and anti-microbial properties that help prevent food from spoiling. The leaves, when dried and decocted, may even be used medicinally as a tisane that is believed to relieve anxiety and treat insomnia, while an integration of its seeds in whole or ground form may further enhance these effects, as the seeds are considered a natural narcotic. [2]

The integration of cilantro (preferably the seeds over the leaves) in regularly consumed foodstuffs may even aid in better digestion, as well as an improved absorption of nutrients derived from the food. In Ayurveda, a strong decoction of cilantro seeds mixed with cumin seeds and ginger root acts as a very potent diuretic employed for detoxifying purposes, while a light tea of cilantro seeds and leaves may be drunk in controlled measures daily to help treat diabetes and promote calmness. [2]

Consuming cilantro may even help to alleviate colds and flu, as well as encourage faster recovery from fevers. It is best used in small amounts, and in controlled dosages - as drinking copious amounts of cilantro tea (especially if derived from a decoction of seeds) can lead lead to lethargy and possible complications, while proper / more sensible dosages are generally believed to generate the best results.

The seeds of the cilantro plant may even be used to extract a volatile essential oil from it - oil of cilantro - which is often employed in aromatherapy as both a soothing scent, as well as an aphrodisiac. This oil may be used in diluted form (mixed with a base oil such as almond oil, etc) as a quick remedy for toothaches and bleeding gums in much the same light as oil of cloves. Heavily diluted, it may even be used to dress bandages used to cover open wounds, as its antibacterial properties not only help facilitate healing, but also prevent the possibility of festering and infection. [3] 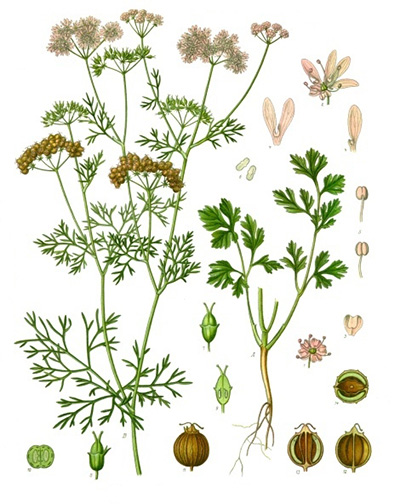 The roots of the cilantro may even be employed for culinary purposes, as is common practice in Indonesia and Thailand, as it imparts a spicy, warming effect to the body when consumed. It is believed that foodstuffs containing cilantro roots are the best remedy to ward off the cold and to fight flu infections. It is a favourite among labourers for its reputed invigorating and pain-relieving properties. It should be noted that while cilantro is a wonderful herb to have on hand always (in its various forms), it is not an herb that everybody is sure to love or like.

Cilantro against food-borne pathogens: The essential oil extracted from cilantro (Coriandrum sativum) possesses substantial efficacy against pathogenic bacteria associated with food-borne diseases and hospital infections. As illustrated by Silva, Ferreira, Queiroz, and Domingues (2011), cilantro essential oil exerts impressive antimicrobial action against all bacteria tested in the study, possibly through a mechanism of action that primarily leads to membrane damage and consequently cell death. [4]

From the twelve essential oils evaluated in vitro for their antimicrobial activities against several Campylobacter jejuni strains in the study of Rattanachaikunsopon and Phumkhachorn (2010), the essential oil from cilantro stands out among the rest in having the strongest antimicrobial activity against all tested strains, as verified by disk diffusion and minimal inhibitory concentration determination assays utilized. In this study, cilantro oil decreased dose-dependently the bacterial cell load at 4°C and 32°C on beef and chicken meat. [5]

Campylobacter jejuni, a Gram-negative bacteria normally isolated from feces, is the most common cause of community-acquired inflammatory enteritis. [6, 7] Moreover, per Kubo I., Fujita, Kubo A., Nihei, and Ogura (2004), aliphatic (2E)-alkenals and alkanals, compounds that can be derived from the leaves of cilantro, are bactericidal agents against Salmonella choleraesuis ssp. choleraesuis ATCC 35640 (Salmonella choleraesuis is now known today as Salmonella enterica). Acting as nonionic surfactants, (2E)-dodecenal (C(12)) is the most effective bactericide at a minimum bactericidal concentration (MBC) of 6.25 μg/mL, followed by (2E)-undecenal (C(11)) at an MBC of 12.5 μg/mL. [8]

Cilantro as cholesterol and blood sugar modulator: When added in the diet, the seeds of cilantro may lower the level of low-density lipoprotein and very low-density lipoprotein cholesterols (i.e., “bad” cholesterols) but may increase the level of high-density lipoprotein cholesterol (i.e., “good” cholesterol), as pointed out in the study of Dhanapakiam, Joseph, Ramaswamy, Moorthi, and Kumar (2008). The hypocholesterolemic effect of cilantro may be partly due to the increased activity of plasma lecithin cholesterol acyl transferase (LCAT) and the enhanced degradation of cholesterol to fecal bile acids and neutral sterols. [9] Additionally, Gray and Flatt (1999) established that the incorporation of cilantro into the diet and drinking water of streptozotocin-diabetic mice could also lead to an antihyperglycemic insulin-like effect. In their study, the aqueous cilantro extract increased the transport of 2-deoxyglucose, the oxidation of glucose, and the incorporation of glucose into glycogen of isolated murine abdominal muscle, and at 0.25–10 mg/mL, the cilantro extract induced a stepwise 1.3–5.7-fold stimulation of insulin secretion from a clonal B-cell line in acute 20-min tests. [10]

Cilantro as relaxant, anti anxiety and insomnia medicine: Being part of the Iranian folk medicine to relieve anxiety and insomnia, the aqueous extract from the seeds of cilantro and its pharmacological applicability with respect to being an anxiolytic were explored by Emamghoreishi, Khasaki, and Aazam (2005). Using an elevated plus maze as an animal model of anxiety and an Animex activity meter and rotarod to assess spontaneous activity and neuromuscular coordination, respectively, they found that at a cilantro extract of 100 mg/kg, an anxiolytic effect can be observed, whereas at 50, 100, and 500 mg/kg, spontaneous activity and neuromuscular coordination are markedly reduced, leading them to conclude that the aqueous extract of cilantro seeds has an anxiolytic effect and may have potential sedative and muscle relaxant effects. [11]

Cilantro as heavy metal detox: Cilantro has been found, when acting with chlorella, to act as a chelating agent, binding to heavy metals and cleansing them from the body. The combination of cilantro and chlorella was found to act more effectively than either component on its own. [12] This combination has been suggested by herbal / alternative practitioners for mercury detoxification.

As one might expect, cilantro from different locations contains varying amounts of the constituent components. [13]

In magickal practice, cilantro leaves and seeds are either mulled in wine or infused in spirits to be drunk as an aphrodisiac, while dried and ground powders of either plant parts may be burnt as incense to encourage love and stoke fiery passion and ardent desire. It is also thought that cilantro seeds, when burnt as an incense will help bring victory or ferocity to a person, especially when it comes to matters of rank, power, or love. [14]

Names of Cilantro, Past and Present 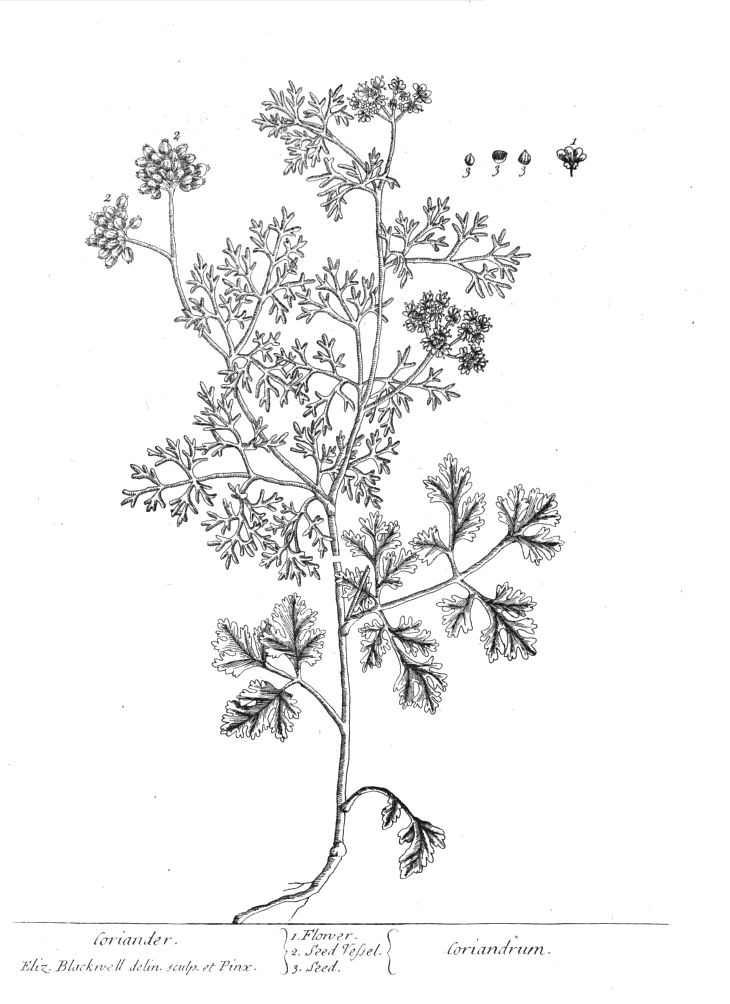