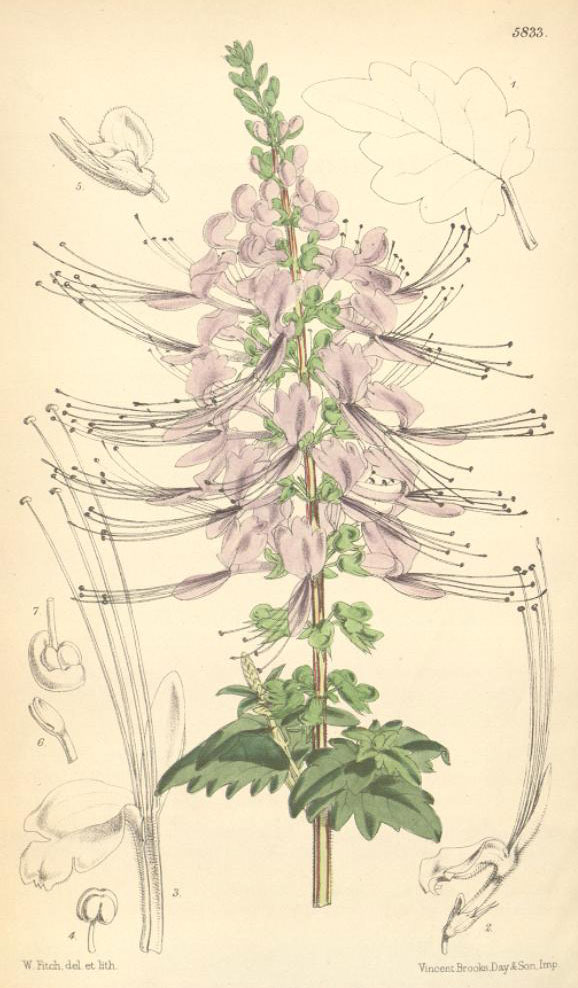 In the practice of herbal medicine, rarely does one find medicinal uses for ornamental plants, unless otherwise employed as such from long-standing tradition. Despite the small number of ornamental plants employed for healing, there are some exceptions to the rule – among those being cat's whiskers, or, as it is better known medicinally in Malaysia - misai kucing.

Also referred to as java tea (as it is prepared as such when employed medicinally), cat's whiskers are found in several places all throughout Southeast Asia, and even a few places in tropical Australia. Commonly employed as an ornamental plant due to its beautiful white flowers, and distinctive delicate petals that spring up much like a cat's whiskers (hence its name), it is also used as a source for nectar and as a means to attract birds due to its inviting aroma. [1]

It is a very distant relative of the basil family, as can be noted for its slightly aromatic leaves. Used medicinally in Malaysia, Indonesia, the Philippines, and even China, it is sadly only relegated to a merely ornamental role in the west, where it is employed chiefly as a landscaping plant due to its flowers, and its relative hardiness.

When used medicinally, cat's whiskers is often dubbed 'java tea', as it is a common beverage in the collected areas of Indonesia, Malaysia, and Sri Lanka which, while not accurately the 'Javanese' islands, were referred to by older seafaring individuals as such. As with all medicinal herbs, every part of the cat's whiskers plant may be employed as medicine, each with their own curative properties, although this practice is only employed in traditional Chinese and Malaysian medicine, as some medicinal parts of the plant such as its roots and seeds can be poisonous despite their therapeutic uses. For general herbal practice however, it is only the leaves (and occasionally) the flowers that are employed as medicine, usually in the form of a decoction or a very strong infusion. It is almost always used freshly picked from the plant, although dried leaves and flowers may be, and have also been employed.

In traditional medicine, the leaves of the cat's whiskers plant can be chewed or pounded and stuffed on a tooth with cavities to ease the pain and prevent the swelling of gums. It may also be pounded and employed as a poultice to relieve swelling. When employed as a strong decoction (especially when prepared fresh), the leaves of the plant is said to be useful for treating a wide variety of ailments, such as gout, renal inflammation, kidney stones, and hypertension. [2] The tisane made from the decoction of its leaves are also touted for its very potent diuretic and cleansing action, which are helpful for relieving the discomfort and eventually curing (if the progression is not yet as grave) kidney stones and ailments of the bladder. [3] Mixed with other medicinal herbs such as wild oregano, it can also be used as a remedy for mild asthma and whooping coughs. [4]

When dried, the leaves may be prepared as an infusion and drunk for the same benefits as can be found when prepared as a decoction. If brewed with just the leaves, the resulting liquor from the tea will be redolent of mint or basil, and if brewed with the flowers, it will add its own distinctive character and aroma to the brew redolent of camellia blossoms.

While commonly brewed to treat urinary ailments and to act as a detoxifying drink, cat's whiskers may also be brewed and drunk as a treatment for osteoarthritis and rheumatism. Most individuals that have now employed it as both an ornamental and medicinal plant attest to its weight loss-promoting benefits, and it is usually marketed as such in the form of easy-to-brew tea bags or capsules , [5] making the herb quite popular in Australia and much of the herbally-inclined Western world. In traditional Chinese medicine, cat's whiskers may be drunk as a general tonic, as it is said to purify the blood and cleanse the kidneys. A not-so-well-known fact that is that cat's whiskers are also helpful for relieving stress and tiredness. It also contains potent antioxidant properties that help to allay ageing and free-radical damage, as the leaves have been found to possess flavonoids said to possess 'radical scavenging activity'. [6]