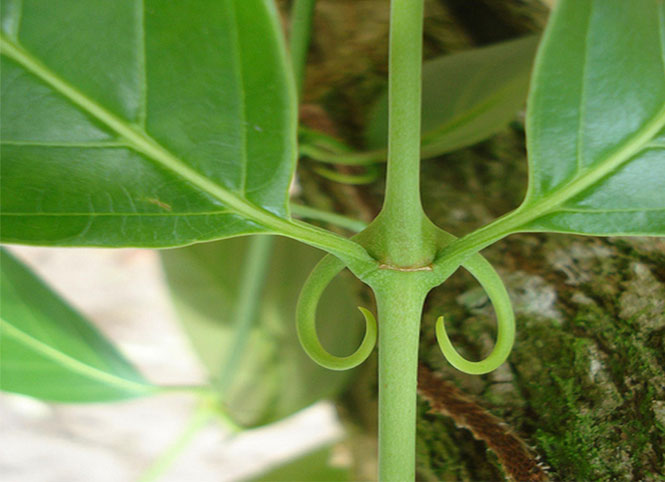 Cat's claw is scientifically referred to as Uncaria tomentosa but is also popularly called uña de gato in Spanish. [1] A thick woody vine, this creeper plant has also been regarded as the “life-giving vine of Peru” and is indigenous to the rainy tropical forests of the Amazon and South and Central America where it is valued as a longtime sacred herb for healing. Cat's claw received its name from the hook-like thorns that resemble the claws of a cat and develop chiefly along the vine in a leafy arrangement. [2]

Uncaria tomentosa is a large woody vine or creeping shrub whose external bark is characterized by superficial longitudinal fissures and whose oblong or elliptic leaves are simple and opposite. Its ground bark appears golden yellow, and its sap is described as watery and astringent in taste. It has quadrangular, yellow-green terminal branchlets and woody, slightly curved but straight spines that come in pairs. [3]

Cat's claw is a well-known anti-inflammatory and anticancer remedy that is used traditionally in folk medicine. In traditional Peruvian medicine, the vine is used to manage several conditions, mainly digestive complaints and arthritis. [4] For around two millennia, native communities of the Ashaninka Peruvian rainforests have employed the plant as a tonic that aids in the prevention of several disorders, as a contraceptive and abortifacient, and as an anti-inflammatory agent in cases of gastric ulcers, gonorrhea, rheumatism, acne, and urinary tract infections. Along with other local herbs such as chuchuhuasi bark, Cat's claw is indicated for arthritis and is acknowledged by high-ranking healer-priests as a plant with great therapeutic power. The herb has now been incorporated in some Essiac tea mixtures and combined with capsaicin as an arthritis cream. [5] Some Chinese herbal preparations also contain Cat's claw as an important component, while a prescription is required to dispense Cat's claw in some European countries such as Germany and Austria. In the United States, Cat's claw is a popular widely used herbal remedy and alternative medicine. [2]

In medicinal practice, Cat's claw has long been considered for the management of a variety of health disorders such as chronic inflammation, tumors, infections, and gastrointestinal maladies like ulcers. As early as the 1960s, the efficacy of Cat's claw had been initially associated with its oxindole alkaloid contents, but recent studies on the water-soluble extract of the plant had reported efficacy despite Cat's claw extract having only insignificant amounts of alkaloids (<0.05%). [1]

Phenolic-rich extracts from the leaves, stems, bark, and wood of Cat's claw were investigated in a 2017 study in terms of their proanthocyanidin profile using a quadrupole-time-of-flight analyzer (ESI-QTOF MS). These extracts were found to mainly contain pure procyanidins and propelargonidins, as well as mixed proanthocyanidins. [6] Employing advanced analytical techniques such as UPLC/TQ-ESI-MS and 13C-NMR, a 2015 study on the phenolic composition of extracts acquired from Cat's claw leaves, stems, bark, and wood identified 32 non-flavonoid and flavonoid compounds. These include, among others, hydroxybenzoic acids (benzoic, salicylic, 4-hydroxybenzoic, prochatechuic, gallic, syringic, and vanillic acids), hydroxycinnamic acids (p-coumaric, caffeic, ferulic, and isoferulic acids), flavan-3-ols monomers, procyanidin dimers and trimers, flavalignans, and propelargonidin dimers. [7]

Cat's claw is among the herbs traditionally employed by natives to manage immunologic and digestive disorders, and since the 1970s, a significant amount of evidence from research has pointed out the benefits of this plant in alleviating symptoms of cancers, arthritis, and other conditions. Cat's claw can cleanse the digestive tract and provide relief among sufferers of Crohn’s disease, colitis, and gastritis. An earlier study by Klaus Keplinger in 1989 indicated that many alkaloid oxidants in the roots of Cat's claw stimulate the immune system, the principal alkaloids being isopteropodine and rynchophyiline. Additionally, Cat's claw has been found valuable in decreasing secondary effects of radiation and chemotherapy among cancer patients. [8]

Phenolic extracts of Cat's claw had been found to display “reasonable” antioxidant capacity values that range from 1.5 and 18.8 mmol TE/g. Antimicrobial activity against potential respiratory pathogens, with a minimum IC50 value of 133 µg/mL, has also been demonstrated. [6]

In a 2017 study by Navarro-Hoyos et al., cytotoxicity of phenolic extracts of Cat's claw against gastric adenocarcinoma AGS and colon adenocarcinoma SW620 cell lines was established. [6] Findings from the prospective study of de Paula et al. (2015) indicated the promising effect of Cat's claw treatment in improving quality of life and minimizing fatigue among patients suffering from advanced cancer. The study involved 51 study participants who took 100 mg of a Cat's claw dry extract thrice daily. Following Cat's claw treatment, volunteers reported improved overall quality of life and social functioning, according to European Organization for the Research and Treatment of Cancer Quality of Life Questionnaire (EORTC QLQ C30), and also decreased fatigue, based on Chalder Fatigue Questionnaire. Additionally, the disease was said to have stabilized in four participants for more than 8 months. [9]

In Amazonian folk medicine, Cat's claw is traditionally employed as treatment for inflammatory disorders. In a 2002 study by Sandoval et al., two species of Cat's claw were demonstrated to exert strong antioxidant and anti-inflammatory activities. However, Uncaria guianensis was proven to be more potent than Uncaria tomentosa in the antioxidant assays, but Uncaria tomentosa (14.1 ng/mL) more significantly inhibited the production of TNF-alpha than Uncaria guianensis (9.5 ng/mL). Furthermore, Uncaria tomentosa orally administered for 3 days produced protection against gastritis and prevented TNF-alpha mRNA expression and apoptosis. [10]

Sandoval-Chacón et al. (1998) concluded from their findings that Cat's claw protects cells from oxidative stress and prevents the activation of NF-kappaB, affirming the traditional role of Cat's claw as an effective anti-inflammatory remedy. NF-kappaB is a protein involved in inflammation and innate immunity. The administration of Cat's claw at a concentration of 100 μg/mL significantly reduced apoptosis in epithelial cells and macrophages and prevented lipopolysaccharide-induced iNOS gene expression, nitrite formation, and cell death. Cat's claw intervention had been found to evidently lessen enteritis, as evidenced by a decrease in myeloperoxidase activity and in damage. [4]

Cat's claw had been demonstrated in the study of Herrera et al. (2010) to exert antimicrobial activity against Enterococcus faecalis, Staphylococcus aureus, and Candida albicans. 2% Chlorhexidine gel coupled with Cat's claw was considered most effective against E. faecalis and C. albicans, with a mean diameter of microbial growth inhibition zones ranging from 21.7 to 33.5 mm. [11]

Diseases caused by virus have also been traditionally treated with Cat's claw due to the numerous biological effects of the plant. A 2014 study demonstrated the antiherpetic property of a hydroethanolic extract obtained from the barks of Cat's claw. Such property has been attributed to the presence of polyphenols or their synergism with oxindole alkaloids or quinovic acid glycosides, which mainly prevents the attachment of the virus to the host cells. [12]

A 2002 randomized double-blind trial evinced the modest efficacy and safety of Cat's claw extract in patients suffering from active rheumatoid arthritis. This small preliminary study enrolled 40 patients into a 52-week, two-phase trial, who reported a reduction in the number of painful joints following 24 weeks of Cat's claw extract treatment. During the second phase, a significant decrease in number of painful and swollen joints was still observed, plus a reduction in values of Ritchie index, a standard measurement for assessing joint tenderness in rheumatoid arthritis. [14]

Water extracts derived from Cat's claw have been found to display not only anti-inflammatory property but also the ability to enhance DNA repair. This implies that Cat's claw can serve as a sunscreen agent that can protect the skin exposed to ultraviolet rays from the sun. Specifically, C-Med-100, a Cat's claw water extract, has been documented to diminish death of skin cells due to ultraviolet exposure by augmenting DNA repair. [15]

Only few side effects have been reported for Cat's claw, the most notable one being mild nausea. Being a traditional abortifacient, Cat's claw is contraindicated during pregnancy and lactation. In addition, herbalists do not agree on using Cat's claw among children less than 3 years old, patients who must undergo grafts and organ transplants, and individuals with hemophilia or receiving vaccines. [5] Due to a scarcity of clinical evidence on their use, Cat's claw preparations for infants are controlled in Europe, as well as those who are to undergo bone marrow or any organ transplants. [16]

The concurrent intake of Cat's claw and any of the following drugs or medical interventions as treatment is highly discouraged: immunosuppressant drugs, thymic extracts, passive vaccines from animal sera, hormones from animal peptides such as insulin, and cryoprecipitate and fresh plasma. [16]