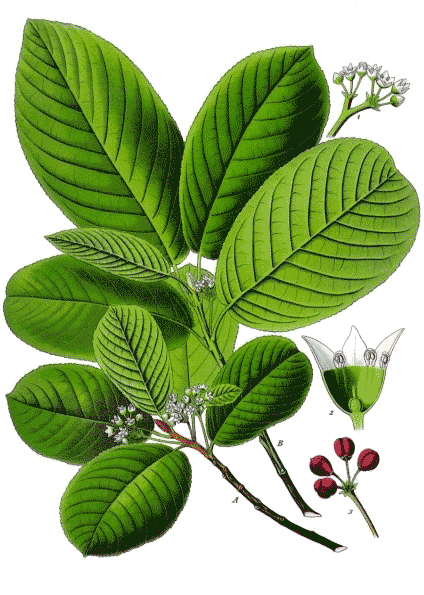 Native to Mexico and the Pacific coastline, this medicinal bark was highly revered by indigenous peoples as a remedy for cleansing the body and mind. Spanish explorers, fascinated by its healing properties, referred to this healing botanical as "Cascara sagrada"--which means sacred bark. In modern times, its power to purge the body of impurities sparked the interest of the pharmaceutical industry--Casacara sagrada became the most common active ingredient in over-the-counter laxatives until it was banned by the FDA in May 2002. Used today by traditional healers, naturopaths, and health-minded individuals to cleanse the colon of toxic matter, research indcates that Cascara sagrada not only increases vitality but also protects against colon cancer. [1]

Cascara sagrada has a laxative effect as a result of its being a free derivative of anthraquinone and hydroxyanthracene. The active components of cascara are absorbed through the small intestines and stimulates the atonomic nervous system, which creates peristalsis. The bitter anthracene and aloin compounds in Cascara are also present in senna leaf (the presence of anthracene accounts for the laxative effect of both herbs). [1]

Researchers have determined that the chemical components of Cascara sagrada are effective in stimulating the organs and digestive system, including the gallbldder, pancreas and stomach (acceleration/increased efficiency of these organs increases digestive fluids). Cascara sagrada has an extremely bitter taste, which--as is the case with other bitter herbs--might account for its laxative action.

Cascara sagrada is considered to be a mild laxative that has for generations been used for its peristaltic action (ability to expel waste).

Long before it was synthesized for use in over-the-counter laxatives, Cascara was used by Natural medicine practitioners and herbalists to treat cases of constipation, as well as more serious conditions related to the liver, gallbladder and pancreas. Cascara has been the subject of clinical trials in order to test the validity of historical and contemporary information concerning its effectiveness in relieving constipation and other ailments. [1]

Research indicates that Cascara sagrada may also be effective in correcting horomonal imbalances that are controlled by the pituitary gland. [1]

In 1977, it was discovered that Cascara does not lose it effectiveness overtime. [2] While frequently, laxatives can become habit-forming and increased dosages become necessary with prolonged use, this was not found to be the case with Cascara: [1]

Clinical trials suggest that the anthraquinones present in Cascara can be effective in treating certain diseases of the liver. [1]

Other names for Cascara Sagrada, Past or Present