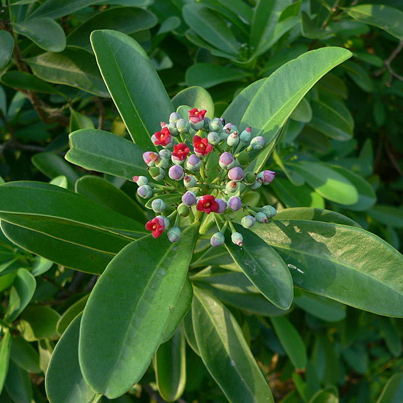 The canella, better known as wild or white cinnamon, is a medium to large sized tree that thrives in several places in the Americas (especially in Florida), as well as some parts of Asia. The canella plant is prized not only for its cinnamon-like bark, which is often used as a substitute for authentic cinnamon bark, but for its beautiful, close-grained hardwood.

The canella is characterised by its scaly and highly aromatic bark which perhaps it's most unmistakable feature. Growing wild in the Americas since prior to the arrival of Europeans, it was one of the plants that immediately drew the attention of the newly arrived voyagers, as it had a highly discernable aroma redolent of cloves. It has large, broad, slightly rounded leaves that possess a lustrous sheen, and clustered fruits and bright, white or yellow flowers. While no record of the fruits ever being eaten by humans remains, it is possible that it had once been consumed by humans, as the fruits are so well-loved by the avian population of wherever canellas grow. When left to its own devices in the wild, the canella tree can grow to as tall as twenty-five to thirty feet. The canella tree is usually cultivated in smaller sizes as a source of its aromatic inner bark, which is used as a spice and medicine, while the larger ones are usually used for their beautiful and highly durable wood. [1]

The canella is most commonly employed, first and foremost as a spice, as its highly aromatic inner bark is used as a substitute for, or an alternative to cinnamon (Cinnamonum verum), due to its clove-like scent and 'warming' properties. Because of its use as an alternative to cinnamon (and, for its smell, even cloves), canella is often referred to by folkloric herbalists as 'wild cinnamon'. When harvested for its aromatic inner bark, the canella plant is usually kept trimmed into moderately manageable sizes (far less than its normal height if left wild), in order to facilitate for the easier acquisition of the inner bark in much the same vein as cinnamon cultivation and harvesting. No folkloric medicinal properties have been attributed to either its leaves or fruits, although the wood that it produces make for some of the most beautiful and durable sources of hardwoods, as it is close-grained, extremely tough, and very dense.

The inner bark of the canella, when dried in the same manner as cinnamon bark, produces a spice that looks, somewhat smells like, and tastes like cinnamon. This bark, like true cinnamon, may be used whole and made into weak or strong decoctions or otherwise ground and mixed into herbal infusions or otherwise incorporated as flavouring in a wide array of different sweet, savoury, and even spicy dishes. [2]

When used as a medicine, canella is usually made into a decoction employing (in most cases) whole 'quills', or, for faster results, it is usually used as an infusion by grinding the whole quill into a fine power. This may also be taken internally by encasing it in vegetable capsules, or otherwise mixed or incorporated liberally into foodstuffs. Some of the active compounds found in canella (eugeol; sesquiterpenes) have been shown to possess antimycotic effects. A strong decoction of canella quills alongside other medicinal herbs is often employed to treat whooping coughs and fevers, while a mild decoction is used to treat sore throat, hoarseness or loss of voice, colds, and minor stomach upsets (diarrhea / indigestion) as it is generally thought of to be a general tonic and warming drink. [3]

Canella also contains trace amounts of vitamins and minerals such as vitamins A, C, and E, and minerals magnesium, iron, manganese, and zinc. Because of this, it was used as a treatment for scurvy in the place of, or along with limes and other citrus fruits. [4] When infused into an oil, canella bark may also be used to help treat rheumatism and arthritis if applied to the affected area due to its warming ability. Also, both the tisane of canella and the canella-infused oil is said to improve the body's circulation. In the hybridized magickal practices of the Central and South America, the canella is also steeped in oil and employed as a love-charm. Despite its varied medicinal use, canella is not as frequently employed in herbal curatives outside of Central and South America, generally due to the preference for true cinnamon for both culinary and medicinal uses.

A strong cytotoxic activity against the chloroquine-sensitive (CQS) strain of Plasmodium falciparum (D10) in vitro (IC50 2.53 mg/mL) by the Canella hexane extract was demonstrated in a 2010 US study. In this study, the extract was derived from Canella winterana leaves. [5] Plasmodium falciparum is a protozoan parasite responsible for majority of the cases (approximately 85%) of malaria [6] and thus holds a great part in the malaria burden faced in the tropics as well as morbidity and mortality. [7] Among the Plasmodium species that cause human malaria, P. falciparum is the most dreaded - and for good and logical reasons. In 2006, P. falciparum malaria was among the leading causes of death worldwide from a single infectious agent, and from an estimated 247 million malaria cases worldwide in 2006, 91% of these were due to P. falciparum, which means that P. falciparum is the culprit behind almost every malarial death. [8]

Using bioassay-guided fractionation, the components were separated from each other in a step-by-step manner based on the differences in their physicochemical properties. Cytotoxicity tests were conducted on the first four sesquiterpenoids mentioned using Chinese hamster ovarian (CHO) cells. [5]

An earlier study by Pino, Rosado, and Fuentes (1998) on the leaf oil obtained from Canella winterana (L.) Gaertn, 70 components were observed to be present, although these chemical constituents exist in minute amounts (<2%). Below is a list of the major Canella winterana substances isolated from the Canella leaf oil through GC/MS analysis [10]:

• Myrcene (9.1%; a monoterpene with analgesic properties [12] and substantial protective effect against oxidant-induced genotoxicity [13])

• Beta-caryophyllene (5.6%; a bicyclic sesquiterpene with anti-inflammatory, antibiotic, antioxidant, anticarcinogenic, and local anaesthetic activities and with the ability to facilitate the passage of paclitaxel, a mitotic inhibitor used in chemotherapy, into the cells, thus potentiating the anticancer activity of the said drug [18])

Before that study, Al-Said, Khalifa, and El-Feraly (1989) already yielded a sesquiterpene compound known today as 4,13-a-epoxymuzigadial, which can be derived from the leaves of Canella winterana. [19] Similarly, Al-Said, El-Khawaja, El-Feraly, and Hufford (1990) isolated three drimane sesquiterpenes from the stem bark of Canella winterana collected in Florida. The sesquiterpenes are as follows: 9- deoxymuzigadial, 9-deoxyisomuzigadial, and 3ﬂ-acetoxypolygodial, the first two being double bond isomers, which could only be separated from each other on silver nitrate-impregnated silica gel. The structures of these sesquiterpenes were elucidated from their spectral data. [20]

Names of Canella, Past and Present

[8] World Health Organization. (2006). Guidelines for the treatment of malaria. Geneva, WHO.