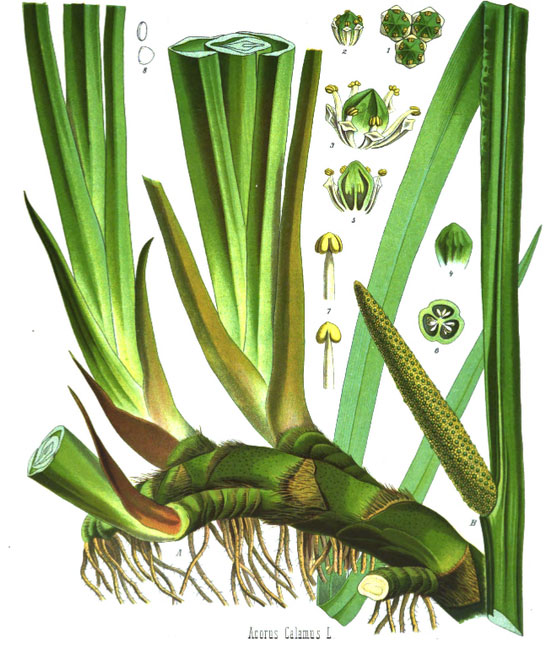 Acorus calamus, commonly referred to as the sweet flag, cinnamon sedge, sweet myrtle, and vacha (in Ayurveda), is a member of the family Acoraceae and is a wetland perennial monocot indigenous to India. [1][2] Its global distribution has however spread along trade routes and can now be found across Europe, southern Russia, northern Asia Minor, China, Japan, Burma, Sri Lanka, and northern United States. Its aromatic leaves and rhizomes are regarded as traditional medicine, whereas its dried and powdered rhizome, possessing a spicy flavor, can be a substitute for ginger, cinnamon, and nutmeg. [2]

Acorus calamus has creeping and extensively branched, cylindrical, aromatic rhizomes that are purplish brown to light brown in appearance on the outside but white inside. Its leaves, about 0.7–1.7 cm wide, have a single prominent midvein and, on both sides, slightly raised secondary veins. This perennial herb is known to hardly ever bear flowers or fruits. Nevertheless, when it does from early to late summer, the cylindrical, greenish-brown flowers can be as long as 3 to 8 cm and are covered with several rounded spikes and the small, berry-like fruits can contain few seeds. [2]

An appetite stimulant and digestion aid, Acorus calamus is deemed a central herb in Ayurvedic medicine that serves a rejuvenating agent for the nervous system, especially the brain, and an effective but cheap remedy for digestive disorders. [2] As a “drug” based on Ayurvedic medicine, the plant is regularly prescribed as treatment for insomnia, melancholia, neurosis, epilepsy, hysteria, memory loss, and remittent fevers. [4]The decoction from this bitter herb has been used in North American communities to treat fevers, stomach cramps, and colic, and the rhizomes are chewed for toothache and, in powdered form, are inhaled for congestion. [2]

Underground rhizomes of sweet flag have been used in folk medicine as treatment for insomnia, insanity and other mental disorders, epilepsy, mania, stomatitis, hoarseness of voice, colic, flatulence and other gastrointestinal ailments, amenorrhea, dysmenorrhea, neuropathy, renal calculi, cough, inflammation, arthritis, kidney diseases, hemorrhoids, skin diseases, and general debility. [5] Various therapeutic potentials of this plant have been attributed to its rhizome.

A number of beneficial pharmacological properties of sweet flag rhizomes have been reported, including sedative, CNS-depressant, anticonvulsant, antispasmodic, cardiovascular, hypolipidemic, immunosuppressive, anti-inflammatory, cryoprotective, antioxidant, antidiarrheal, antimicrobial, anticancer, and antidiabetic effects. However, several of these are still in the process of thorough scientific confirmation. [3]

Sweet flag accessions were shown in the study of Kumar et al. (2016) to display cytotoxic activity against cancer cells. The cytotoxicity of IHBT/AC/7 and IHBT/AC/16 accessions was investigated against different cancer cell lines, namely, human colorectal adenocarcinoma (HT–29), human epidermoid carcinoma (KB), and human cervical cancer (SiHa) cells at varying times (24, 48, and 72 hours). The findings indicated a very activity by both accessions at 300 μg/mL for 72 hours against all the tumor cells. [8]

In the study of Parab and Mengi (2002), a noteworthy hypolipidemic activity was observed in rats administered with 50% ethanol extract derived from sweet flag rhizomes at doses of 100 and 200 mg/kg and with saponins isolated from this extract at a dose of 10 mg/kg. The sweet flag aqueous extract only demonstrated its hypolipidemic activity at a dose of 200 mg/kg. [9]

In the study of Kim et al. (2011), both the essential oil and hexane extract derived from Acorus calamus presented strong antimicrobial or antibiotic activity against most bacteria and yeast tested, except Escherichia coli. Methyl isoeugenol, one of the major constituents found in the Acorus calamus essential oil alongside cyclohexanone, has also manifested a similar antimicrobial activity, except against Bacillus subtilis. Propionibacterium acne, which is notoriously involved in acne vulgaris, has been found to be susceptible to Acorus calamus essential oil and hexane extract, as well as methyl isoeugenol. [10]

Methanol extract obtained from sweet flag leaves had been shown in a 2012 Indian study to exhibit promising antidiarrheal activity. With loperamide as a drug standard, diarrhea was experimentally induced using castor oil in Wistar rats, and the extract at a dose of 400 mg/kg was orally administered to these test animals. Control wet feces (0.98 ± 0.35) and more periods that are diarrheal were observed for methanol extract administration. [11]

A 2012 study investigated and demonstrated the analgesic and cytotoxic activity of extracts from four plants, including Acorus calamus root extract, using acetic acid-induced writhing method in mice and brine shrimp lethality assay. Animals treated with the extract were characterized by a significantly dose-dependent inhibition of writhing response induced by acetic acid. In the analgesic test, a 15.16% and 54.51% of writhing protection was afforded by the Acorus calamus extract at concentrations of 250 and 500 mg/kg body weight in mice, respectively, which was the highest value of writhing protection among all four plant extracts screened. In the brine shrimp lethality assay, the mean percent mortality of larvae for the Acorus calamus extract was 61.25 ± 26.66, and the LC50 and LC90 values were 50 and 300 μg/mL, respectively. [5] In the same way, Jayaraman, Anitha, and Joshi (2010) evaluated the analgesic property of a methanol extract from Acorus calamus roots using acetic acid-induced writhing method and found that the oral administration of this extract at doses of 100 and 200 mg/kg resulted in protection against pain models in mice. [4]

The study findings of Mehrotra et al. (2003) provided confirmatory data on the antiproliferative and immunosuppressive properties of an ethanol extract derived from Acorus calamus rhizome in vitro; such modulation of immune response can be helpful in improving disease conditions. The Acorus calamus ethanol extract was shown to suppress the proliferation of human peripheral blood mononuclear cells stimulated by phytohaemagglutinin, which is a mitogen, and a purified protein derivative and to inhibit the growth of numerous mouse and human cell lines and production of nitric oxide, interleukin-2, and tumor necrosis factor-alpha. Treatment using Acorus calamus extract had also downregulated the expression of CD25. [12]

In a 2009 animal study, crude extract of Acorus calamus and its ethylacetate and n-hexane fractions have been found to lower mean arterial pressure in normotensive anesthetized rats and to exhibit a vasoconstrictor effect on baseline. Additionally, the pretreatment of rabbit aortic rings with Acorus calamus crude extract and its fractions led to a shift in Ca concentration–response curves toward the right, which is similar to that of verapamil, an oral medication used to treat high blood pressure. [13]

A 2012 acute toxicity study verified the non toxicity of ethanol extract from sweet flag rhizomes upon acute and chronic administration in Wistar rats. At dose levels of 1750 mg and 5000 mg/kg body weight, the Wistar rats treated with the ethanol extract via oral gavage presented clinical signs such as abdominal breathing, piloerection, and tremors for 30 minutes, but no mortality, pathological gross abnormalities, and histopathological changes were observed and hematological and biochemical data indicated an absence of marked differences in parameters. [14]

[11] M. Kapadia and A. Kharat, "Antidiarrhoeal activity of leaves of Acorus calamus," International Journal of Pharmaceutical Sciences and Research, vol. 3, no. 10, p. 3847–3850, 2012. http://ijpsr.com/bft-article/antidiarrhoeal-activity-of-leaves-of-acorus-calamus/?view=fulltext

[13] A. Shah and A. Gilani, "Blood pressure-lowering and vascular modulator effects of Acorus calamus extract are mediated through multiple pathways," Journal of Cardiovascular Pharmacology, vol. 54, no. 1, p. 38–46, 2009. https://www.ncbi.nlm.nih.gov/pubmed/19528816