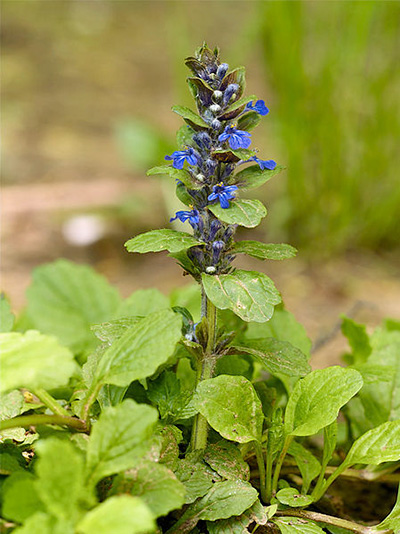 Native to northern England, Bugle has a history of use as an ingredient in medicinal remedies. Historical documents indicate that the herb was originally prepared as a syrup, and later as an ointment which was applied to wounds. Referred to as a "narcotic" by Rafinesque, Bugle has been used to treat various ailments. [1] A daily dose of the syrup was thought to protect against ulcers, and the ointment was applied externally to accelerate the healing process.[2] Historical texts also indicate that a decoction of the leaves and flowers was prepared as a treatment for gangrene, ulcers and sores.[1]

Contemporary herbalists have described Bugle as an astringent, bitter and aromatic, with mild cleansing properties; external application of the herb has been considered an effective means of bruise-prevention.[2]

Research into the purported health benefits of bugle is limited; however, Bugle has been of interest to modern medicine for its potential to regulate thyroid hormones. In-vivo experiments have been conducted for this reason, but no claims have been made as to whether bugle might be useful as a treatment for hyperthyroidism.[2]

Elizabeth Blackwell's "A Curious Herbal" (1751): "1. The stalks on which the flowers grow are 9 inches high, the leaves are a reddish green, and the flowers a bright blue. 2. It grows in woods and hedges, and flowers in May. 3. Bugle is a noted vulnerary plant, and used inwardly and outwardly for all kinds of Bruises, wounds and contusions, as likewise for sores, ulcers, spitting of blood and haemorrhagies from any part."

William Thomas Fernie - "Herbal Simples" (1895): " BUGLE - Several Herbal Simples go by the name of Selfheal among our wild hedge plants, more especially the Sanicle, the common Prunella, and the Bugle.... "The decoction of Prunell," says Gerard, "made with wine and water, doth join together and make whole and sound all wounds, both inward and outward, even as Bugle doth. To be short, it serveth for the same that the Bugle serveth; and in the world there are not two better wound herbs, as hath been often proved."
The Bugle, or middle Comfrey, is also a Sanicle, because of its excellence for healing wounds, in common with the Prunella and the true Sanicle. It grows in almost every wood, and copse, and moist shadowy place, being constantly reckoned among the Consounds. This herb (Ajnga replans) is of the Labiate order, bearing dark blue or purple flowers, whorled, and crowded into a spike. Its decoction, "when drunk, healeth and maketh sound all wounds of the body."
The chemical principles of the Prunella and the Bugle resemble those of other Labiate herbs, comprising a volatile oil, some bitter principle, tannin, sugar, and cellulose. " 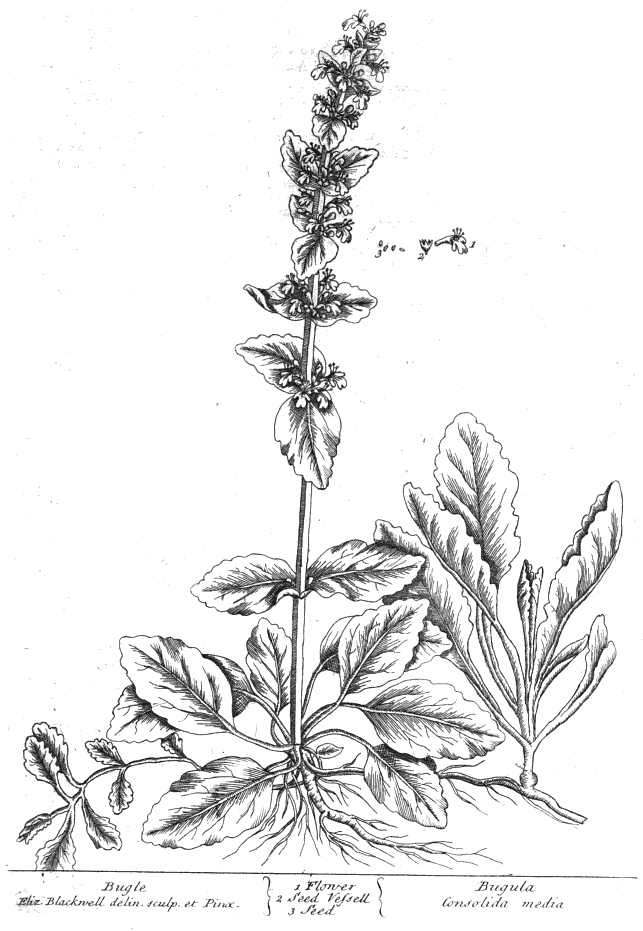 Other names for Bugle, Past or Present