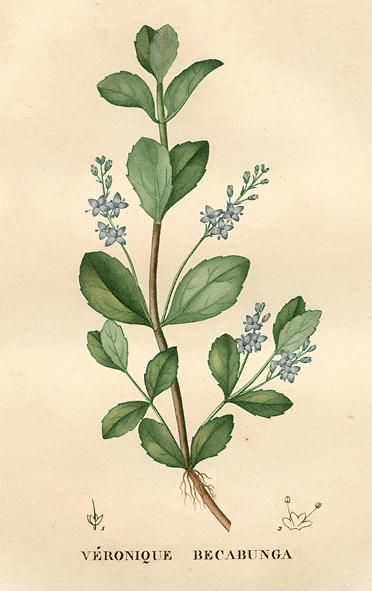 Brooklime is a succulent herb indigenous to Europe, North Africa and western Asia. [1] A semi-aquatic plant, it thrives in shallow bodies of water and will grow alongside streams and rivers. Brooklime often grows alongside watercress--both plants are suited to similar environments. Brooklime has a history of use as a substitute for watercress in salads and other dishes involving greens. [2]

In traditional healing systems, Brooklime is said to have been used to reduce fever and prevent against scurvy. Modern research suggests that the high concentration of vitamin C in Brooklime leaves might have reduced a person's chances of developing scurvy. [3]

As per historical documents, the leaves of Brooklime can be ground to a powder and applied as a paste to treat minor wounds. However, whether this practice is effective or safe has not been determined by modern science. [2]

The use of Brooklime juice in the treatment of scurvy was documented by John Hall in his 1657 publication, Select observations of English bodies, and by William Clowes in A profitable and neccessarie booke of observations (1596). In a 1990 study, a sample was produced as per Clowe's instructions for "scurvy grass beer," a concoction containing the fresh-pressed juices of scurvy grass, beer, cinnamon, pepper and ginger, in order to test the claims of its supposed usefulness in the treatment of scurvy. Accounting for the loss in vitamin C that would have resulted from oxidization, it was determined that a patient for whom "scurvy grass beer" was administered would have received approximately 20mg vitamin C, a dosage which might have been adequate to cure him of scurvy. [3]

Elizabeth Blackwell's "A Curious Herbal" (1751): 1. It grows to be sixteen inches high, the leaves are a grass green, and the stalks a reddish green, and the flowers a fine blue. 2. This plant grows in Rills and running Ditches, it flowers in June, and keeps its leaves all ye winter. 3. It is accounted a good deabstruent and antiscorbutic, abounding with volatile Parts, very good for ye Scurvy, being an ingredient of ye antiscorbutic Juices, and diet drinks for that distemper. It is likewise detersive and cleansing, useful in obstructions of ye Kidneys by Gravel or slimy humours, as also for the Stone and Dropsy. Matthiolus says it is good to bring away a false conception, and provoke the Menses.

William Thomas Fernie - "Herbal Simples" (1895): The Water Pimpernel (Angallis aquatica) is more commonly known as Brooklime, or Beccabunga, and belongs to a different order of plants, the Scrophulariaceae (healers of scrofula). It grows quite commonly in brooks and ditches, as a succulent plant with smooth leaves and small flowers of bright blue, being found in situations favourable to the growth of the watercress. It is the brok lempe of old writers, Veronica beccabunga, the syllable bec signifying a beck or brook; or perhaps the whole title comes from the Flemish beck pungen, mouth-smart, in allusion to the pungent taste of the plant.
"It is eaten," says Gerard, "in salads, as watercresses are, and is good against that malum of such as dwell near the German seas, which we term the scurvie, or skirby, being used after the same manner that watercress and scurvy-grass is used, yet is it not of so great operation and virtue." The leaves and stem are slightly acid and astringent, with a somewhat bitter taste, and frequently the former are mixed by sellers of watercresses with their stock-in-trade.
A full dose of the juice of fresh Brooklime is an easy purge, and the plant has always been a popular Simple for scrofulous affections, especially of the skin. Chemically, this Water Pimpernel contains some tannin, and a special bitter principle, whilst in common with most of the Cruciferous plants, it is endowed with a pungent volatile oil, and some sulphur. The bruised plant has been applied externally for healing ulcers, burns, whitlows, and for the mitigation of swollen piles. 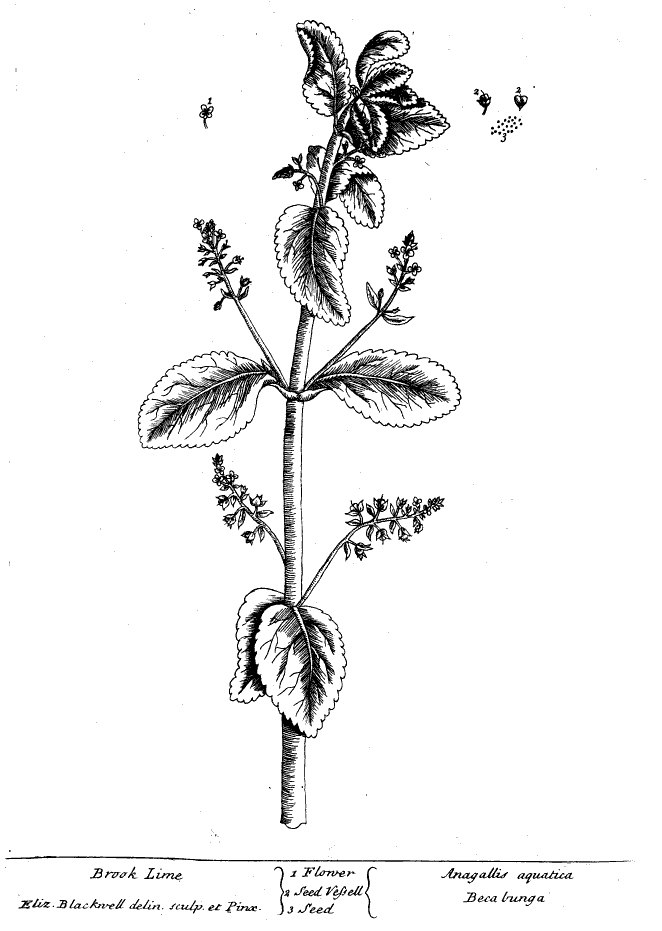