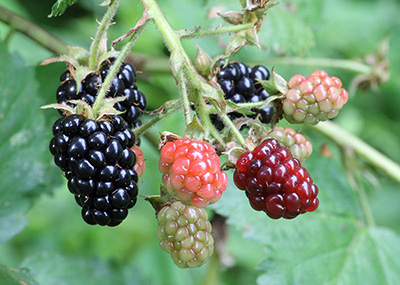 The blackberry is native to North America that is considered a pest by some and a godsend by others. Its strong, persistent, thorny vines grow vigorously alongside fences, near streams and on the edges of valleys near mountain ranges. The fruit of the plant - the blackberry - is an powerful antioxidant. Scentific studies have determined that antioxidants inhibit and destroy free radicals in the body. [1] Because of its antioxidant properties, blackberry (leaf and fruit) is the object ongoing analysis in the field of naturopathy.

Studies show that blackberries might prevent against muscle and ligament damage. [2]

Recent pharmacutical research indicates that a daily dose of blackberries might help to prevent cancer. Blackberries contain anthocyanins--which have anti-inflammatory and anti-oxidant properties [1]. According to findings presented by the University of Kentucky [1], the anthocyanins found in blackberries may have the potential to inhibit cancer cell growth, and to kill existing cancer cells.

Naturally occuring in fruits such as blackberries, anthocyanins are not produced by the human body. While the addition of fresh blackberries, or blackberry jam, into your daily diet can increase your body's defense against free radicals, the most efficient way to unleash the fruit's disease-fighting power is to take blackberry extract in capsule form-- so that the anthocyanins are not immediately digested (and thus will be delivered to the gastrointestinal tract). [1]

Utilizing high-performance liquid chromatography (HPLC), Huang, Zhang, Liu, and Li (2012) analyzed the chemical composition of blackberry along with other berries such as blueberry and strawberry in Nanjing and found a long battery of phenolic acids and flavonoids in blackberry. Phenolic acids in tested samples include gallic acid, protocatechuic acid, p-hydroxybenzoic acid, vanillic acid, caffeic acid, pcoumaric acid, ferulic acid, ellagic acid, and cinnamic acid, whereas flavonoids include flavones such as luteolin; flavanols such as rutin, myricetin, quercetrin, and quercetin; flavan-3-ols such as gallocatechin, epigallocatechin, catechin, and catechin gallate; and anthocyanidins such as malvidin-3-galactoside, malvidin-3-glucoside, and cyanidin. [5] Among those mentioned, ellagic acid holds considerable medical spotlight for its ability to induce cancer cell death through apoptosis associated with decreased ATP production and to reduce cancer cell viability, expressing selective cytotoxicity and anti-proliferative activity and inducing apoptosis in Caco-2, MCF-7, Hs 578T, and DU 145 cancer cells without any toxic effect on the viability of normal human lung fibroblast cells. [6]

Two noteworthy ones are anthocyanins and salicylic acid. [7] Anthocyanins are what makes a variety of fruits, vegetables, cereal grains, and flowers red, purple, and blue in color. This group of flavonoids however is highly distinguished by research for their valuable biological effects, including protection against liver injuries, significant reduction of blood pressure, improvement of eyesight, strong antiinflammatory and antimicrobial activities, inhibition of mutations caused by mutagens from cooked food, and suppression of proliferation of human cancer cells. [8] Salicylic acid, on the other hand, is the major component of aspirin and is responsible for the drug's anti-inflammatory action. Salicylic acid intake has been associated with a diminished risk of atherosclerosis and colorectal cancer development. [9] Its use in the treatment of acne lesions is superior when compared to benzoyl peroxide. [10]

Blackberry is also a rich source of cyanidin-3-glucoside, a compound known to possess chemopreventive and chemotherapeutic activities and to scavenge ultraviolet B-induced *OH and O2-* radicals. Cyanidin-3-glucoside can block the neoplastic transformation induced by 12-Otetradecanolyphorbol-13-acetate (TPA) in JB6 cells and inhibit the proliferation of a human lung carcinoma cell line, A549. Moreover, as demonstrated by several studies, cyanidin-3-glucoside decreases the size of A549 tumor and suppresses metastasis in nude mice. [11]

In a recent study by Konieczynski and Wesolowski (2012) wherein total and water-extractable contents of magnesium, manganese, and copper in 41 leaves of four botanical species and in 33 samples of herbs were looked into, the leaves of blackberry were found to contain the highest amounts of a waterextractable bioavailable form of manganese. [12] In addition to its rich manganese content, blackberry is also high in abundance as regards dietary fiber, vitamins C and K, and folic acid. [7]

Elizabeth Blackwell's "A Curious Herbal" (1751): 1. This shrub has many long creeping branches; there are commonly 5 leaves on one Footstalk in the lower parts, and three on the upper parts next ye Fruit; the leaves are a deep green, the flowers a pale Red and sometimes White; and the fruit when ripe is of a black colour. 2. It grows in most hedges, and flowers in June and July; the fruit is ripe in September. 3. The leaves are accounted restringent and are frequently prescribed in Gargasisms for sore Mouths and Throats; the unripe fruit is very binding and restringent, useful for all kinds of fluxes and bleeding, for Thrushes and sore mouths. The Juice of the ripe Fruit made into Syrup is esteemed good against the Heat of Urine.

William Thomas Fernie - "Herbal Simples" (1895): BLACKBERRY - This is the well-known fruit of the Common Bramble (Rubus fructicosus), which grows in every English hedgerow, and which belongs to the Rose order of plants. It has long been esteemed for its bark and leaves as a capital astringent, these containing much tannin; also for its fruit, which is supplied with malic and citric acids, pectin, and albumen. Blackberries go often by the name of "bumblekites," from "bumble," the cry of the bittern, and kyte, a Scotch word for belly; the name bumblekite being applied, says Dr. Prior, "from the rumbling and bumbling caused in the bellies of children who eat the fruit too greedily." The blackberry has likewise acquired the name of scaldberry, from producing, as some say, the eruption known as scaldhead in children who eat the fruit to excess; or, as others suppose, from the curative effects of the leaves and berries in that malady of the skin; or, again, from the remedial effects of the leaves when applied externally to scalds.
It has been said that the young shoots, eaten as a salad, will fasten loose teeth. If the leaves are gathered in the Spring and dried, then, when required, a handful of them may be infused in a pint of boiling water, and the infusion, when cool, may be taken, a teacupful at a time, to stay diarrhoea, and for some bleedings. Similarly, if an ounce of the bruised root is boiled in three half-pints of water, down to a pint, a teacupful of this may be given every three or four hours. The decoction is also useful against whooping-cough in its spasmodic stage.
Gerard says: "Bramble leaves heal the eyes that hang out, and stay the hemorrhoides [piles] if they can be laid thereunto." The London Pharmacopoeia (1696) declared the ripe berries of the bramble to be a great cordial, and to contain a notable restorative spirit. In Cruso's Treasury of Easy Medicines (1771), it is directed for old inveterate ulcers: "Take a decoction of blackberry leaves made in wine, and foment the ulcers with this whilst hot each night and morning, which will heal them, however difficult to be cured."
As soon as blackberries are over-ripe, they become quite indigestible. Country folk say in Somersetshire and Sussex: "The devil goes round on Old Michaelmas Day, October 11th, to spite the Saint, and spits on the blackberries, so that they who eat them after that date fall sick, or have trouble before the year is out." Blackberry wine and blackberry jam are taken for sore throats in many rustic homes. In Devonshire the peasantry still think that if any one is troubled with "blackheads," i.e., small pimples, or boils, he may be cured by creeping from East to West on the hands and knees nine times beneath an arched bramble bush. This is evidently a relic of an old Dryad superstition.
The French name for blackberries is mures sauvages, and in some of our provincial districts they are known as "winterpicks." Blackberry wine, which is a trustworthy cordial astringent remedy for looseness of the bowels, may be made thus: Measure your berries, and bruise them, and to every gallon of the fruit add a quart of boiling water. Let the mixture stand for twenty-four hours, occasionally stirring; then strain off the liquid, adding to every gallon a couple of pounds of refined sugar, and keep it in a cask tightly corked till the following October, when it will be ripe and rich.
A noted hair-dye is said to be made by boiling the leaves of the bramble in strong lye, which then imparts permanently to the hair a soft, black colour.

Other names for Blackberry Bush, Past or Present 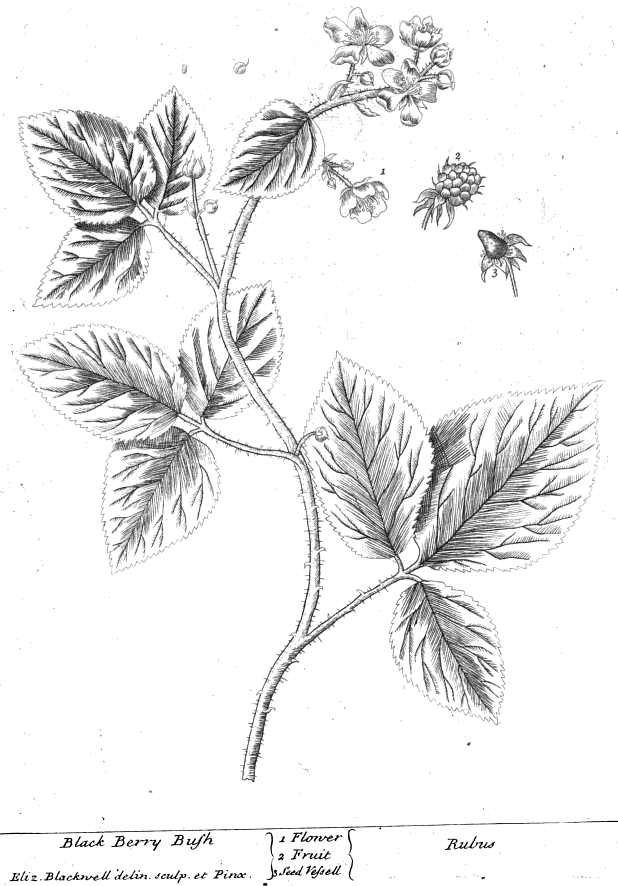 [1] Roenker, Robin. Elisting Blackberries in the Fight Against Cancer. University of Kentucky Odyssey. 2006.