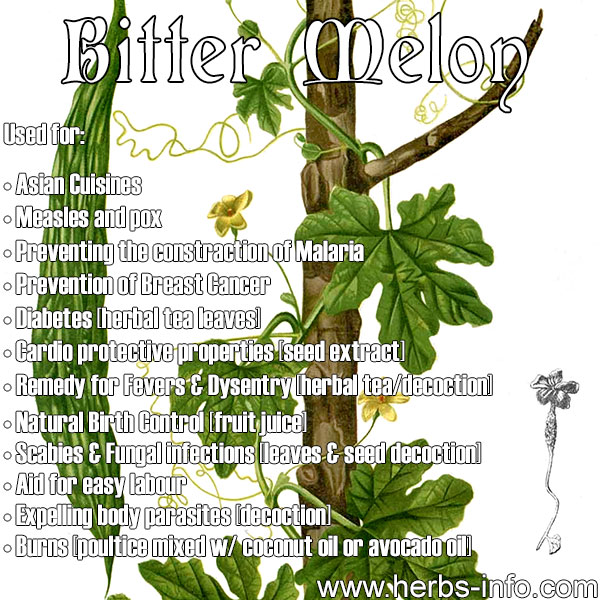 The bitter melon is (as the name suggests) a highly bitter fruit that has been used for both medicinal and culinary purposes since ancient times in various parts of the world. Originally native to India and some parts of Africa, it soon spread via trade and introduction to China, Japan, the Philippines, and other parts of Asia, as well as selected areas of Northern and Eastern Europe. While not at all related to the melon family of plants, it has been referred to as such very commonly in the English speaking world, although a more fitting term would be 'bitter gourd'.

The bitter gourd is a vine that is very discernable for it's large, almost maple-leaf shaped leaves. The fruits of the vine itself are medium to large elongated gourds replete with very discernable ridges or indentations in the flesh of the fruit, so much so that it resembles (from a distance) a lumpy, shriveled-up cucumber. Due to its spread from its native soil and its acclimatization to other areas, other varieties of bitter melons also exists, each with their own unique physical characteristics, although the most popular varieties employed for both medicinal and culinary purposes is chiefly the Indo-Chinese and Indian varieties (the latter taking on a 'spikier' appearance than the former). [1]

The bitter melon is chiefly used as a vegetable in many Asiatic countries, particularly in the Philippines, India, and China despite its often somewhat unpalatable taste. The fruit of the bitter melon vine is usually harvested while it is still light green to pale yellow in colour, as it becomes bitterer as it ripens, to the point where it is wholly unpalatable. The young fruits are then split or cut in half, and the seeds and pith taken out and discarded. When young, the fleshy part of the fruit (which is cooked skin and all) is watery and crunchy, resembling a cucumber in texture, although with a discernibly bitter taste. This is usually offset by the addition of seasonings, or by squeezing out its juices to remove the bitterness (this is strongly discouraged however, as whatever medicinal properties that the fruit may possess will invariably be lost). The fruit is usually added as an ingredient to soups, stir-fries, and other vegetable-based or meat-and-vegetable dishes. When the fruit is fully ripened, its pith becomes sweet and red. At this stage, it is the flesh of the fruit which is discarded as it becomes very bitter, while the pith is usually eaten raw, either lightly seasoned and consumed on its own, or as part of a vegetable salad. [2]

The fruit of the bitter melon is said to be packed with various nutrients, and is very high in Vitamin C. The bitter melon, despite being mainly a culinary plant, has also been employed medicinally, as its fruit is said to be helpful in treating viral diseases such as measles and pox. In many parts of Asia, especially in the Philippines, it is believed that the consumption of bitter melon is helpful for preventing the contraction of malaria. Studies have shown that it does indeed possess antimalarial activity, although its efficacy on humans is still being analysed. [3]

Aside from being used as an antiviral foodstuff, compounds in the bitter melon fruit have also been shown to help treat HIV infected individuals, although studies have suggested that extracts are much more bioavailable and synthesizable than a mere oral ingestion of bitter melon. Further studies have shown that bitter melons may possess anticancer benefits, as a specific extract from the fruit (15, 16-dihydroxy-alpha-eleostearic acid) has been shown to cause apoptosis (cell death) of leukemia cells in vitro. This benefit is capitalized in India, where raw bitter melon fruit is consumed to help treat and prevent breast cancer. [4]

Further health benefits and therapeutic properties have been associated with the consumption of bitter melon, as its leaves (also edible, and consumed as a bitter green when young) may possess significant medicinal properties in combating the herpes simplex type 1 virus. An active compound found in the bitter melon leaves – charantin – is also said to possess hypoglycaemic properties, making the consumption of the leaves beneficial for individuals afflicted with diabetes. In the Philippines, the leaves of the bitter melon are harvested, dried, and made into teas or capsules and are marketed as an anti-diabetic food-supplement (under the leading brand name 'Charantia'), both locally and abroad. [5]

The seeds of the bitter melon, while not used in cuisine, have its purposes medicinally, as it too possesses anti-cancer and cardio-protective properties. [6] Care should be taken when consuming extracts or whole bitter melon seeds however, as it can be slightly toxic to children and some adults, and may cause favism in some individuals.

Aside from these benefits, the leaves and fruit of the bitter melon tea, when made into an infusion or decoction have also been used traditionally as a remedy fevers and dysentery. The juice of the bitter melon fruit is also employed by the natives to act as a natural (albeit unreliable) birth control, and is applied in the form of a douche. A very strong decoction of the leaves and seeds of the bitter melon can be employed as a topical rinse to treat scabies and fungal infections; it has also been used as an abortificant as well as an aid for easy labour. [7] Some native cultures in Togo and Africa even employ a strong decoction of the leaves and seeds as a purgative to expel bodily parasites. [8] The leaves, when ground and mixed with coconut oil or avocado oil can also be employed as a poultice to treat burns.

Bitter melon has long been investigated for its anticancer properties. In a 2010 American study wherein the human breast cancer cells MCF-7 and MDA-MB-231 and primary human mammary epithelial cells were used as in vitro models, the effectiveness of bitter melon (Momordica charantia) extract to inhibit breast cancer proliferation was assessed. Study results revealed that the bitter melon extract has significantly reduced cell proliferation and has induced apoptotic cell death among breast cancer cells, which was accompanied by increased poly(ADP-ribose) polymerase cleavage and caspase activation. [9] The bitter melon extract suppresses cancer cell growth through the following processes:

• By modulating the signal transduction pathways

• By inhibiting the expression of cyclin B1 (a regulatory protein involved in mitosis [10]) and cyclin D1 (one of the proteins associated with the regulation of cell cycle progression [11]) and by enhancing p53, p21, and pChk1/2

• By inhibiting survivin and claspin expression (survivin is an apoptosis protein inhibitor highly expressed in most cancers, [12] while claspin is a nuclear protein found by research to be a sensitive marker of aberrant proliferation [13]

This goes to show that based on the results, there is evidence that the extract from bitter melon can be utilized as among the dietary supplements to prevent breast cancer. [9]

In another earlier study that investigated the effects of bitter melon intake in cervical cancer patients undergoing normal treatment (radiotherapy), the study results revealed a significant increase in percentage of natural killer (NK) cells in patient control and patient treatment groups. It should be noted that NK cells are the body's cancer cell "eliminators," and their count is usually low or reduced in cervical cancer patients who have a defective immune system. [14]

Sleeping sickness, or human African trypanosomiasis, is a vector-borne parasitic disease occurring only in 36 sub-Saharan African countries, specifically in areas where tsetse flies abound. The tsetse flies transmit the causative agent of sleeping sickness, which is Trypanosoma brucei. [16] Recently in 2012, a British study has declared bitter melon a "promising source for trypanocidal agents"; these trypanocidal agents are valuable in that they could be used as lead compounds for the development of anti-sleeping sickness drugs. As claimed by this study, the use of extracts derived from Chinese and Indian bitter melon varieties decreased the cell proliferation activity of Trypanosoma brucei in the bloodstream. [17]

Four cucurbitane glycosides, namely, momordicosides Q, R, S, and T, and the stereochemistryestablished karaviloside XI isolated in bitter melon exhibit beneficial biological effects against diabetes and obesity. These bitter melon constituents induce GLUT4 translocation to the cell membrane to enable glucose to enter cells; they also increase the activity of AMP-activated protein kinase (AMPK), which is associated with glucose uptake and fatty acid oxidation. [18] The following have been isolated from bitter melon as well and have shown blood hypoglycemic effects in diabetes-induced male ddY mice strain at 400 mg/kg:

Due to its abortifacient properties, the consumption of bitter melon is inadvisable for pregnant women, while the toxicity of its seeds indicates their extremely limited and controlled uses. Its employment for the treatment of children's ills is discouraged, as the seeds are highly toxic to children.

Names of Bitter Melon, Past and Present