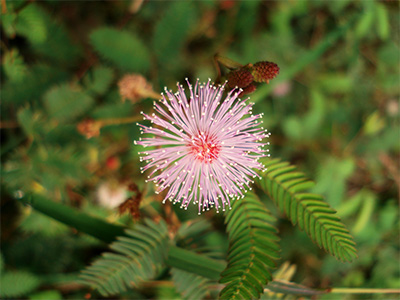 Names of Bashful Mimosa, past and present

The Mismosa pudica (lit. 'shy' or 'bashful', hence the name) is a perennial or annual herb that grows in many parts of the world. Originally supposedly native to South America and Central America, other parts of the globe such as the greater part of Asia (or at least those areas still undisturbed by modernization) where it grows alongside wild plants and is considered a weed. The bashful mimosa is remarkable for being among the few plants in the world that is known to 'move' or 'wilt' when touched disturbed in any way. This has made the bashful mimosa a sort of 'celebrity' in the plant world, where it is grown for the novelty of its sensitivity, a feat which is accomplished by what is referred to botanically as seismonastic movement – an effect caused by the loss of turgor pressure within the cells of the plant which causes its 'collapse'. [1]

The bashful mimosa is akin to a creeping shrub possess remarkably sharp, thorny branches as well as slight, delicate pink-coloured fuzz-ball blooms. They grow amid grass, other shrubs, and even beneath or next to the branches of larger plants. While the bashful mimosa is considered to be no more than a pesky weed or a fun (if potentially prickly) botanical oddity, it is also a not-so-well-known medicinal plant with a variety of traditional uses. As with most tiny shrubs, all the parts of the bashful mimosa can be used for medicine each containing their own healing properties although for general purposes, only the roots, leaves and stems of the plant are employed for medicinal use.

While the bashful mimosa is considered to be no more than an oddity or a pesky weed in areas where it is, or was known to be endemic, nations such as China, Malaysia and the Philippines have long considered the bashful mimosa to be a medicinal plant. In Chinese traditional medicine, the plant is called han xiu cao, and is used as a general tonic for a variety of ailments. In Philippine folkloric medicine ('panambal') the leaves, roots, and (rarely) the flowers and seeds of the bashful mimosa are used to treat a variety of different ailments. The roots of the bashful mimosa are typically drunk as a tisane, as it is traditionally believed to be an aphrodisiac. [2] The crushed and boiled roots are also used as a diuretic, and can be helpful for dysentery and dysmenorrheal. [3] Care should be taken when using the roots however, as they posses an emetic quality which can be poisonous if consumed in large doses. One study shows that aqueous extracts of the plant roots have the ability to help neutralize cobra venom. [4] The leaves of the plant, when prepared as tea, can be used as a bitter tonic, as well as a remedy for asthma, although the latter usually calls for the decoction of the entire plant matter in traditional practices, or, in some traditional practices, only a choice decoction of mimosa seeds. [5] The leaves, when boiled and mixed with water to make tepid bathwater can also be used to help relieve muscular pains, although a sitz bath consisting of boiled mimosa leaves (or, if possible, the entire plant itself) is reputedly more effective. When mixed with oil and ground into a fine paste, it can be applied to sores to facilitate in faster healing. Dried and powdered roots and leaves can be mixed with fresh milk (perhaps goat's milk, in the traditional sense) or powdered milk and made to be ingested for the treatment of fistulas and piles. [5]

The unassuming appearance of the bashful mimosa belies its wondrous healing properties. Despite still being widely unrecognized as a wonder herb, those who are in the know (shamans and herbalists) still continue to use the bashful mimosa to treat minor ailments that plague the common man – more often than not, at no charge at all (what, with the plant being a weed after all)!