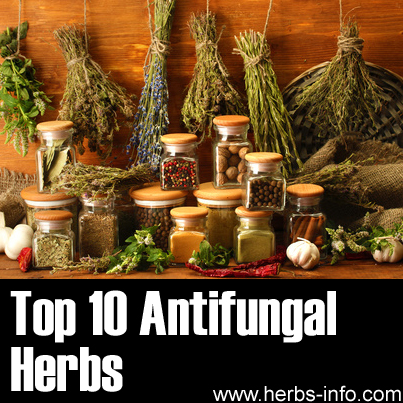 Approximately over 1 billion people are afflicted by fungal infections annually. While many of these are considered mild infections, this figure nonetheless shows no signs of slowing down. Candida, a genus of yeasts, is one of the more common fungal overgrowths that can infect almost any part of your body. Moreover, fungal infection is not just confined as a human condition. Fungus can also exist pretty much anywhere outside the human body - including in food. Food contamination for instance can occur in meat and milk products that may be easily transferred to humans. [1]

Several known anti-fungal treatments exist today, including incorporating special diet regimens. However, you should not immediately take any radical steps without proper medical consultation. Like any other herb, anti-fungal herbs may possess intrinsic benefits but their results can be experienced the fullest and best when applied or ingested at the correct frequency and amount.

While scientific data on anti-fungal herbs is still somewhat modest, there is no shortage of herbs which are reported to treat yeast and fungal infections. Regardless of whether you're looking to combat or prevent fungal growth, several herbs have been identified to possess anti-fungal properties. 10 of these are described below. Note - as always, this site is not medical advice.

This popular herb in North America gained its reputation as a cure-all for any kind of ailment due to the recommendation of a prominent doctor in the 1800's, Samuel Thompson. [2] And fighting fungi is definitely one of those. Studies have confirmed that the rhizome, rootlets and root hairs of goldenseal contain berberine which has been shown to promote anti-fungal activities. [3]

If you suffer from fungal infections on your nails or have fungal skin infections like dandruff and dermatitis, [4] then diluted oregano oil may be a solution. Scientists have identified Carvacrol and Thymol (this latter is also prevalent in thyme, as the name suggests) as the anti-microbial agents in Oregano oil responsible for attacking germs and fungi in your bloodstream. [2] One study has likewise identified these volatile compounds to prevent fungal growth among bakery products [5] - a further reason for the use of such herbs in culinary applications.

This spice has been shown to contain the same compounds as oregano oil essential for combating mouth and intestinal infections of Candida, alleviating athlete's foot while strengthening your immune system. [2] A study has revealed that oil extracts of cloves possess anti-microbial activities against all bacteria and yeast tested. [6]

Canker sores, painful syphilis and herpes are reported to be targeted by black walnut. [4] Some researchers even have discovered that black walnut husks have superior anti-fungal characteristics to fight Candida over medicinal drugs. [2] Studies have suggested that by making your intestines more alkaline, black walnut not just kills fungi but also parasites that often thrive in an acidic environment. [7] More recently, a 2012 study using mouse skin epidermal cells concluded that juglone from black walnut trees contains some anti-cancer efficacy. [8]

Several studies have shown that the active ingredient in olive leaf extracts, oleuropein, is effective in fighting fungal overgrowth caused by candida. [7] Olive oil works by boosting your immunity against unhealthy invaders like Candida and lowering your blood sugar levels to avoid yeast infections. [2] Another study of 10 different plant extracts in Islamic medicine including olive leaf extracts stated that these can protect against pathogenic and mycotoxigenic fungi, both in qualitative and quantitative assessments. [1]

Also known as Scottish marigold or pot marigold, calendula is a wonder herb that has long history of medical and therapeutic uses across the globe. Several pharmacological studies have revealed that this herb contains substances that bring about anti-inflammatory, antiviral and antifungal properties. [9] A 2012 study indicated that ethanol extracts of calendula exhibited "excellent antifungal activity". [10]

Calendula and its components are believed to be capable of destroying fungi completely. In addition to its innate ability to promote faster healing of wounds, calendula is widely used to treat various conditions that are triggered by fungal infestation like athlete’s foot, candida and ringworm. [11]

Since the ancient times, garlic has been rampantly used as a natural treatment for a wide range of health conditions. In the last three decades, numerous studies have been conducted to identify the constituents of garlic which makes it an effective antibacterial, antiparasitic and antifungal agent. Researchers finally concluded that it is ajoene which is a powerful compound that makes garlic an excellent anti-fungal herb. [12]

Some studies claimed that allicin is what makes the herb effective. Allicin is a potent phytochemical that is released after garlic is chopped or crushed. After crushing or chopping the clove of garlic, just leave them for five to ten minutes, to increase the amount of allicin compound released. [13]

For quite a long time now, turmeric has been considered as one of the most potent anti-fungal herbs. According to a study published on the Journal of Antimicrobial Chemotherapy, turmeric contains curcumin - a powerful compound that has been found to inhibit the growth and spread of candida infection. One lab research (in vitro) found that curcumin worked better than drug fluconazole as an antifungal agent. [14] Curcumin is also used to treat athlete’s foot.

Recently, oils extracted from tea tree have been extensively studied due to its profound effects to the body. Research shows that tea tree oil can be used to treat fungal infections like jock itch, tinea barbae, tinea faciei, tinea capitis, tinea unguium, ringworm and athlete’s foot. Some also use this essential oil in treating acne, lice, eczema, boils, thrush and vaginitis. [15]

Coming from the mint family, spearmint is a perennial herb that has been cultivated since the ancient ages because of its healing and medicinal value. Several researches have confirmed that spearmint contains active substances that make the herb an effective anti-fungal agent but less powerful than oregano. [16]

[1] Exploration of Islamic medicine plant extracts as powerful antifungals for the prevention of mycotoxigenic Aspergilli growth in organic silage. http://www.ncbi.nlm.nih.gov/pubmed/21547917