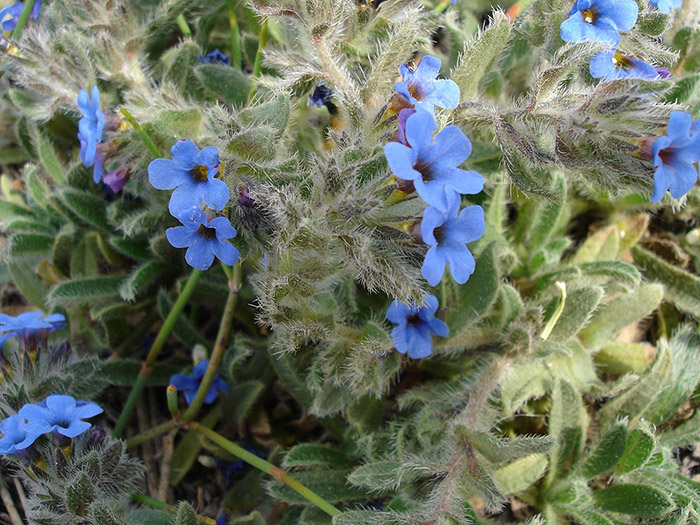 A member of the Boraginaceae family, alkanet or Alkanna tinctoria is well distinguished for its roots, which produce a fine red coloring material used as a red dye for fabrics, cosmetics, and food. This plant is an indigenous species of the sandy soils of Mediterranean region, but has now been widely distributed in South Europe and Western Asia. [1][2] As a dyestuff, its roots are conventionally processed in alcohol, ether, and oils rather than in water, in which the dyes are insoluble. [1]

Alkanna tinctoria is a 20–40 cm perennial herb with prostrate bushy grayish-green stems that have long, soft bristles and soft, oblong-lanceolate leaves. Blossoming from February to April, the flower is bright blue and the dense inflorescences become elongated in fruit. [3] The plant naturally propagates from seeds, which are in monospermic achenes. Its dark red root is externally near blackish in appearance but appears blue-red on the inside, with a whitish core. [1]

Alkanna tinctoria has been known for several centuries both for the red pigment (alkannin) in its roots and for its medicinal properties. The Romans were said to use alkannin to dye their robes and exploit its anti-inflammatory property in folk medicine. [4] The literature mentions the use of the roots in kerosene as an external liniment and the plant’s fresh leaves for sore throat. This herb in general has been traditionally advised in folk medicine as treatment for jaundice, kidney stones, skin ailments, bruises, wounds, sprains, fractures, and abscesses. The rind has also been utilized as remedy for diarrhea and ulcer, and the roots can be mixed with olive oil to produce an internal liniment. [3]

Based on field data, alkanet in oil can be used in cases of fractures, abscesses, and rheumatism, whereas the roots can be boiled with clarified butter or with the herbs Ferula asafoetida and Nigella sativa and be applied on wounds. The alkanet rind can be utilized as an antiseptic for skin diseases, including eczema, itching, and scabies, and boiled mixture of roots and clarified butter can be applied as eye drops. [3] In Chinese folk medicine, the plant is valued for its anti-inflammatory and antitumor activities. [5] 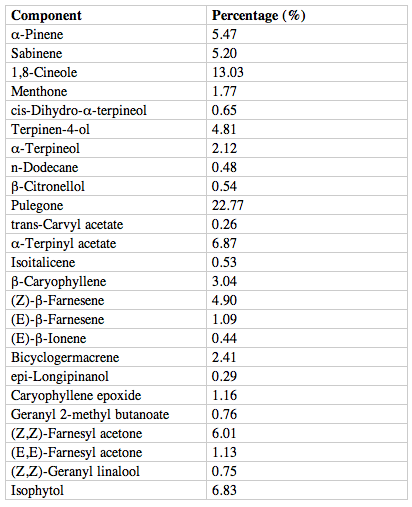 Findings from the study of Huu Tung et al. (2013) indicated that alkannin and angelylalkannin, two naphthoquinones isolated from the roots of Alkanna tinctoria (L.) Tausch, exert antiproliferative activities against human colon cancer cells HCT-116 and SW-480, as evaluated by 3,4-(5-dimethylthiazol-2-yl)-5-(3-carboxymethoxyphenyl)-2-(4-sulfophenyl)-2H-tetrazolium salt (MTS) method. Through flow cytometry to verify cell cycle profile and cell apoptosis, these two naphthoquinones had been shown to significantly suppress cancer cells and, at concentrations ranging from 1 to 10 µM, to arrest the cell cycle at the G1 phase and eventually trigger cell apoptosis. The IC50 values of alkannin and angelylalkannin were 2.38 and 4.76 µM, respectively, for HCT-116 cells and 4.53 and 7.03 µM, respectively, for SW-480 cells. [6]

Likewise, as determined through MTS technique, a 2013 study published in the journal Anticancer Drugs pointed out the antiproliferative effects of alkanet compounds against HCT-116 and SW-480 human colorectal cancer cells. At tested concentrations of 3–50 μM, alkannin, angelylalkannin, and 5-methoxyangenylalkannin from Alkanna tinctoria all exhibited strong antiproliferative activities. Among the three, 5-methoxyangenylalkannin was the most potent, arresting cancer cells in the S and G2/M phases and inducing cell apoptosis. Such apoptotic effect had been supported by caspase assay and docking analysis. [2]

Elsharkawy et al. (2013) explored the in vivo anti-inflammatory property of a traditional medicine mixture comprising three different plants, namely, alkanet (Alkanna tinctoria), common madder (Rubia tinctorum), and Artemisia herba-alba. At concentrations of 100 mg/kg and 200 mg/kg provided orally, the oil mixture extract effectively reduced carrageenan-induced paw edema in rats. After 4 hours at a concentration of 200 mg/kg, inflammation appeared to be inhibited. Significant anti-inflammatory activity was observed, as evidenced by a 78% and 82.5% inhibition of edema at concentrations of 100 mg/kg and 200 mg/kg, respectively, after 4 hours. This anti-inflammatory activity was comparable to that of the standard drug indomethacin (89.5%). [1]

A 2015 study published in BMC Complementary and Alternative Medicine demonstrated the substantial antibacterial activity of aqueous, chloroform, ethanol, and hexane extracts derived from Alkanna tinctoria, at a concentration of 25 mg/mL, against multidrug-resistant isolates of Acinetobacter baumannii, Escherichia coli, Pseudomonas aeruginosa, and Staphylococcus aureus. As evaluated through well diffusion method, although all four extracts inhibited S. aureus with respect to the positive control antibiotic (imipenem), the Alkanna tinctoria leaf aqueous extract exhibited the best antibacterial activity against A. baumannii (10  ±  03 mm), P. aeruginosa (12  ±  0.5 mm), and S. aureus (14 ± 0.5 mm). Determination of minimum inhibitory concentrations (MICs) and minimum bactericidal concentrations (MBCs) of these extracts at quantitative concentrations indicated eradication of multidrug-resistant bacteria, which can be attributed to the leaves’ phytochemical content, especially alkaloids and flavonoids. [10]

Alkannin, the active constituent of Alkanna tinctoria root extract, can act as an inducer of heat shock protein 70 (HSP70) in living organisms and can protect keratinocytes against ultraviolet injury, according to a 2012 study. Heat shock proteins are molecular chaperones synthesized by keratinocytes to guard cells from extreme physiological, pathological, and environmental insults and are part of the survival defense mechanisms of several cells such as hepatocytes, cardiac myocytes, and neurons. Findings from this 2012 study demonstrated that pretreatment of human keratinocyte HaCaT cells with alkannin at a concentration of 1 µM led to a noteworthy suppression of ultraviolet B (UVB)-induced apoptosis and caspase-3 cleavage. In the Gene Chip assay employed to examine differences in gene expression, alkannin appears to inhibit UVB-induced apoptosis by evoking HSP70 in human keratinocytes. [5] A similar 2012 study identified shikonin as the most potent chemical inducer of heat shock proteins among 80 compounds screened for their HSP70-inducing property in human lymphoma U937 cells. Shikonin, at a dose 0.1 µM, was shown to induce HSP70 after 3 hours without activating the heat shock transcription factor 1 (HSF-1) and to elicit a significant generation of reactive oxygen species. [11]

The roots of alkanet have been traditionally used as botanical remedy for ulcers, inflammation, and wounds. Alkannin esters of beta,beta-dimethylacrylic acid, beta-acetoxy-isovaleric acid, isovaleric acid, and angelic acid isolated from the roots of Alkanna tinctoria had been established to exhibit superb wound healing properties in an early clinical study involving 72 patients with venous ulcers. [12]

There is still limited data available on the therapeutic uses and safety of alkanet. Pregnant women are strongly prohibited from using alkanet as herbal medication due to the possible presence of hepatotoxic pyrrolizidine alkaloids, which might cause birth defects and liver damage. Individuals taking medications such as carbamazepine, phenobarbital, phenytoin, rifampin, and rifabutin are advised to refrain from consuming alkanet. These medications increase the breakdown of other medications by the liver and interact with this herb. [13]