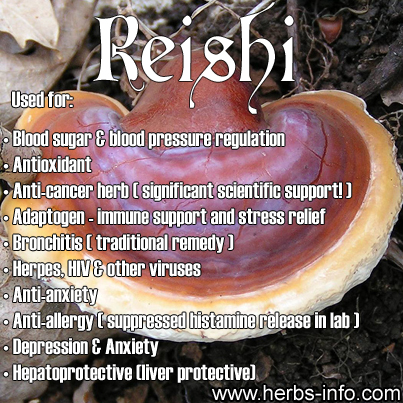 Reishi, also known as lingzhi is a mushroom which has been used medicinally in Asia since ancient times. Although considered non-toxic, it is bitter in taste and not typically used in cuisine. Rare in the wild and growing on trees, it is venerated in the East, and its Chinese name Lingzhi means "herb of spiritual potency". Ancient Chinese medical texts stated that Reishi prolonged the agility of the body and conferred great health and longevity. [1]

Reishi mushrooms typically have red, kidney shaped caps but can vary in form - and there are many species / varieties. In the ancient Bencao Gangmu, a renowned Chinese medical work in 53 volumes that was completed in 1578, reishi mushrooms were categorized according to their shapes and colors, it being believed that different colored Reishi nourished / healed different parts of the body. [1][2] More recent studies have shown that many varieties which were collectively labeled as Ganderma lucidum are infact distinct species, producing different medicinally active compounds and pharmological effects. [3] The study of fungi is a highly complex field - and one in which there is still so much to discover.

Reishi mushrooms have been highly regarded in traditional Chinese medicine for over 2,000 years. [1] Reishi was once considered an "elite" herb, once described as the Taoist "Elixir of Life" and reserved for use by royalty. However, reishi remained relatively unknown in the west and are scarcely mentioned in western literature prior to 1900. The earliest mention of them I can find in English is from Yoshio Ichikawa' 1888 New Pocket Dictionary of the English and Japanese Languages which has the simple entry "Reishi, n. A species of hard mushroom; a fungus."

However, turning to their other Japanese name, man-nentake, we find this name appears in James Curtis Hepburn's 1867 Japanese and English dictionary. A good general description of Reishi occurs in Dai Nihon Nokai's 1895 Useful plants of Japan: described and illustrated, Volumes 1-3:

"Polyporus niponicus, Jap. Reishi, Saiwai-take, Mannen-take; a fungus growing on decayed roots with cloudlike variegations on the pileus attached to the stipe. In summer it grows in the form of a Japanese writing-brush and gradually expands forming the pileus. The stem and upper part of the pileus are red, purple, or yellow, with a lacquer-like lustre, and the under part of the pileus is brown and coarse. It is hard like a cork and can be preserved for a long time. It is precious as a pot-plant. Sometimes it has two layers of the pileus or it is divided into several branches."

Though long cherished in the Orient, reishi is seldom described in Western literature until the 1990's; when it suddenly gathers momentum, together with the general surge of interest in Oriental herbalism that was reaching western shores at that time. Reishi is mentioned in R.O.B. Wijesekera's 1991 The Medicinal Plant Industry as having been one of the most important elixirs of the Orient - although it is described as having been scarce and until that time owing to the fact that propagation had been difficult and had only recently been successfully achieved.

Indeed, Amy Rost's 2009 Natural Healing Wisdom and Know How: Useful Practices, Recipes, and Formulas states that prior to the 1970's, when it was successfully grown from spores in the laboratory, Reishi was extremely rare and expensive.

Much investigation has been done into Reishi's medicinal qualities, especialy in the Orient. A search of Pubmed revealed 1112 entries for Ganoderma lucidum - and scientific studies have claimed activity against many of the most serious diseases of our time - including cancer and various viruses: [4]

Reishi as AIDS treatment herb: Reishi has been of great interest to herbalists researching herbs that boost the immune system - including HIV / AIDS researchers - and in 1998 it was discovered that substances in the aqueous extract from the fruiting bodies of reishi were active against HIV-1. [6] More recent in vivo studies have found possibility of a curative effect against AIDS, however this evidence is still very inconclusive. [7]

Reishi as anti-herpes agent: Reishi has been found [8][9] to have action against the herpes virus and in 2007 was found (as part of a multi-herb formula) to shorten the recovery time from symptoms of an outbreak. [10]

Reishi as anti-cancer herb: Reishi's ability to fight cancer is accepted as fact in Japan, where it has been officially recognized as a cancer treatment by the Japanese government. Numerous in vitro studies have been performed on various compounds isolated from both the fruiting bodies and the mycelia of reishi, reporting encouraging results. [4][11][12] However, in the western ortohodox medical world, such claims often appear to be viewed more skeptically. Nonetheless, Reishi extracts are already used in commercial pharmaceutical anti-cancer preparations such as MC-S. [1]

Reishi as bronchitis treatment: Reishi mushroom has been used in Oriental medicine as a treatment for chronic bronchitis since ancient times. [13]

Reishi as anti-anxiety herb: Reishi is also believed to be beneficial for people suffering from chronic stress or anxiety [14] and has been said to promote calmness and inner balance. [15]

Reishi as aphrodisiac: In the 2000's, we find that all of a sudden, some marketing materials of the west have proliferated Reishi's reputation as an aphrodisiac. It's stated in some marketing documents [15][16] that Reishi was traditionally believed to have aphrodisiac properties. However, the source of this legend is not stated. It is presumed that one or more of the many ancient Chinese Medicinal herbals is the source of these claims - however, in ancient descriptions of Reishi's qualities, mention of Reishi as an aphrodisiac is very uncommon and overall the claim seems unlikely.

Reishi as liver protectant: Ganoderic acid, extracted from Reishi, has been found to have some protective effects against Hepatitis B in vivo - suggesting potential as a human liver disease treatment. [17]

Despite all this research, it's said that not all of the active compounds in Reishi have been isolated. Like many plants, it is highly complex and comprised of a large number of substances. [14] A group of triterpenes, called ganoderic acids have been identified from the plant, which have a molecular structure similar to that of steroid hormones [4][11] It also contains other compounds often found in fungal materials, including polysaccharides (such as beta-glucan), coumarin, mannitol, and alkaloids.

Reishi has been considered safe when used within appropriate dosage limits, although I have read that there have been reports of side effects with prolonged use - dry mouth, digestive distress, nosebleed and bloody stools. This is not medical advice.

With any fungus, extreme caution should be used if wild harvesting. Some species of fungus are deadly poisonous and as a general rule, fungi should only be harvested by a true expert who can identify species accurately.

Reishi is listed in the AHPA's "Herbs of Commerce", p. 267 - meaning that it falls under the guidelines as a supplement in the USA. [18] It is commonly available in tincture and powder (capsule) form.