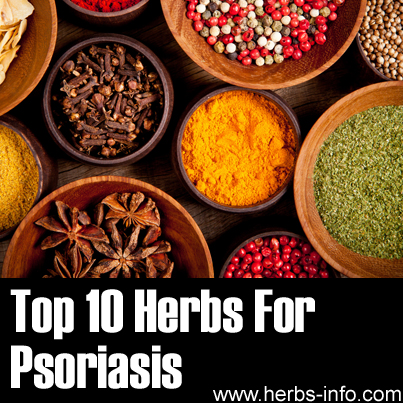 Silvery or flaky skin that causes itching, cracking, redness, soreness and even bleeding--if you experience these symptoms, then you most probably have an autoimmune skin condition known as psoriasis. Psoriasis can affect anyone at any age, whether male or female which is why every year, the American Academy of Dermatology reports around 150,000 new cases of psoriasis in the US. [1]

The bad news is, there is no known permanent cure for psoriasis and because of its symptoms, many sufferers often feel self-conscious to go out and seek treatment. [2] The good news however is that relief of symptoms for this lifelong inflammatory skin disease have been reported [1] by using herbal alternatives that can easily be purchased or found in your kitchen or garden. Whether pharmaceutical medicines have stopped working for you or you simply want to complement them to enhance their effects, these herbal remedies provide potential alternative solutions for a chronic skin disease that should not stop you from living a productive, quality day-to-day life:

This plant has been shown to inhibit human T-cell activation which is one of the known causes of psoriasis and skin inflammation. [3]Milk thistle is actually traditionally used to treat liver and biliary disorders due to its active flavonoid, silymarin. However, there is also strong evidence suggesting silymarin's protective role in the human skin. [4] And because it is reported to improve liver functioning, better liver in turn promotes healthier immune system and blood detoxification to alleviate psoriasis. [2]

While this medicinal herb is a native of India, it is now growing popular in Western mainstream. Some scientists believe Gotu Kola is a potential "herbal cure-all", as psoriasis and other skin conditions are just one of the many disorders it can help heal. A 2010 review of Gotu Kola identifies saponins as the main constituents in Gotu Kola responsible for its therapeutic and vascular effects. Particularly when applied as a gel, Gotu Kola inhibits the inflammatory process and aids in skin thickening to improve any infection. [5]

One of the most widely studied plants, aloe vera, particularly its gel extract, is also considered one of the best herbs for psoriasis. [2] Clinical trials in both human and animals have proven its efficacy. A 2012 experiment using a mouse tail model of psoriasis showed significant increase in epidermal thickness and overall antipsoriatic activity by 81.95% when applied ethanolic extracts of Aloe vera leaf gel. [6] Among humans, studies conducted by the Tropical Medicine and International Health showed that 83% of patients with severe psoriasis had improvements after using aloe gel, without any side effects. [2]

While this is a mostly used a component of curry powder for culinary purposes, turmeric has also been shown to relieve swelling, joint pain and inflammation. [3] A clinical review of turmeric indicates its active component, curcumin to have chemopreventive properties and is therapeutic for various skin disorders, including psoriasis, by fighting free radicals and reducing inflammation through the inhibition of nuclear factor-kappa B. Recent clinical experiments also suggest the benefits of curcumin application in skin regeneration and wound healing. [7]

Stress is often linked with psoriasis, whether as one of its causes or its effects. Alternative medical practitioners believe brewing a cup of licorice tea 1-2 times a day can help reduce inflammation-causing psoriasis while calming you at the same time. [2] Chinese herbalists have used the anti-inflammatory and anti-infective properties of licorice to restore the balanced state of the body and allow psoriasis to naturally heal. [1]

This marvelous herb is widely recognized for its ability to treat various types of skin ailments like eczema, acne and of course, psoriasis. Burdock acts as a blood purifier that helps in clearing the bloodstream from toxins.

According to research, burdock contains antioxidant, antibacterial and anti-inflammatory properties that promote healing. Furthermore, it is fortified with powerful antioxidants like luteolin, quercetin and phenolic acid. For thousands of year, burdock has been used as a topical treatment to a host of skin ailments like acne, boils, eczema, dandruff, dermatitis and psoriasis. [8]

Applying 20-40 drops of burdock tincture 3 times a day can significantly help in improving flare-ups that are associated with psoriasis. [9] When used as poultice or compress, burdock speeds up the healing process.

This herb is considered one of the best and most effective natural treatments for psoriasis available today. Calendula contains anti-inflammatory and antiseptic properties that help in slowing down the spread of psoriasis, as well as in easing the inflammation of the lesions. Aside from its ability to heal wounds, calendula also works by refreshing the skin and allowing it to rejuvenate and regenerate. [10]

To treat psoriasis, just apply a mixture of 2 drops of calendula oil, 1 drop of oregano oil and 1 tablespoon olive oil onto the affected area. Best results are achieved through continuous application. [11]

This perennial herb is one of the most popular natural remedy for psoriasis. St. John's Wort is reported to work by reducing the amount of cyclosporine in the blood. According to research, though cyclosporine is rarely used, this substance is normally used to treat severe cases of psoriasis. Aside from treating psoriasis, St. John's wort is also used to prevent flare-ups or relapse of the condition. [12] As determined by Psoriasis Area and Severity Index (PASI), administration of cyclosporine can improve psoriasis symptoms by as much as 75%.

Recent scientific research revealed that witch hazel is really effective in treating almost all sorts of skin ailments. Witch hazel is capable of soothing the symptoms of psoriasis including the pain associated with it. It also helps in reducing itchiness as well as in eliminating the visible patches of eczema and psoriasis. [13] Aside from cleansing and toning the skin, witch hazel contains anti-inflammatory properties which enable the herb to treat psoriasis, eczema and acne. It can also treat other skin conditions caused by bacteria or fungi.

Chickweed is known for its drying and cooling effects on skin eruptions, cuts and wounds. The herb offers astringent effects which prove to be effective in dealing with a host of skin ailments like nettle burns, eczema, acne, lesions, minor burns, insect bites and psoriasis. [14]

When applied as cream, salve or poultice, chickweed proves to be effective in relieving the symptoms of psoriasis. The herb actually makes an excellent natural remedy for cuts and wounds, as well as in eliminating irritation and itching. [15]

Furthermore, chickweed has cool and soothing effects that promote faster healing, and relieving itchiness associated with psoriasis. It also works by reducing secretions and swelling, improving inflammation, treating chapped or rashed skin, and of course, by encouraging skin tissue repair.