Herbs For The Pancreas 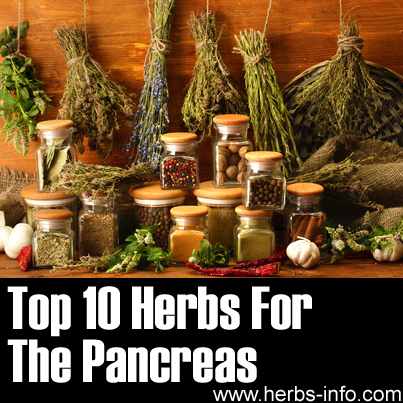 Although small and generally unnoticed, your pancreas plays a key role in the digestive and endocrine process. It basically has a 2 fold function: enzyme production for fat and protein digestion and insulin production for controlling your blood's glucose levels. [1]

If your pancreas is unable to fully function, nutrients from food become unavailable to your system. Three major pancreatic problems may occur: 1) Diabetes, which is due to insufficient secretion of insulin and is one of the most dangerous and common pancreatic disorders; 2) acute or chronic pancreatitis which results in inflammation and tissue damage along the pancreas; [2] 3) pancreatic cancer which is the 5th leading cause of cancer death in America [3] and has a 100% mortality rate. [4]

Diet and lifestyle are currently thought to play a major role in restoring pancreatic health. Although studies on the effects of herbs on pancreatic health are limited and some even inconclusive, promising preliminary studies can provide a basis for further research on pancreatic disorders. These 10 herbal supplements may also help boost the health of your pancreas by strengthening it and protecting it from each of the disorders:

10 Herbs For The Pancreas

It is thought that the rich silica content in horsetail helps to heal and rebuild damaged tissues caused by inflammation from pancreatitis. [2] Moreover, one study that analyzed the effects of horsetail extract on diabetic rats found that after 5 weeks of treatment, the herbal extract produced significant anti-diabetic activities and regeneration of the pancreas. [5]

In traditional medicine, oregano has been thought to be a promising treatment for oxidation-linked disorders like diabetes because of its rich natural phenolic antioxidants. In 2004, researchers at the University of Massachusetts studied the anti-diabetic mechanisms of oregano extract and found that they can inhibit porcine pancreatic amylase. These results support the belief that oregano could be a potential anti-hyperglycemic agent for managing hyperglycemia and diabetic complications long term. [6]

In 2007, scientists from the University of Pittsburgh Cancer Institute discovered that this herb has cancer-fighting properties and may prevent or decelerate the growth of pancreatic cancer tumors. Doctors believe this is done by causing pancreatic cancer cells to die off naturally though a process known as apoptosis without causing toxic side effects. [3] During that same year, oral intake of haritaki aqueous extract was shown to reduce elevated blood glucose by 43.2% and hepatic and skeletal muscle glycogen content by 75% and 62.9% respectively, suggesting it may have potential value as a diabetic treatment. [7]

Phytopharmacological studies of various calendula extracts have exhibited anti-inflammatory, anti-viral and anti-genotoxic therapeutic properties. In 2006, scientists from Spain revealed that calendula extract displayed activities that could potentially inhibit tumor cell proliferation from 70-100% when tested on a wide variety of human and murine tumor cell lines, including pancreatic cancer cells. This indicates this herb has cytotoxic tumor cell properties and that calendula can trigger lymphocyte activation. [8] Likewise, when pancreatitis results from alcohol abuse, application of calendula salve may help to prevent dehydration. [2]

Like calendula and haritaki, dandelion is thought to be an effective treatment against aggressive and resistant pancreatic cancer cells. In 2012, researchers from Canada discovered that dandelion root extract can induce apoptosis and autophagy to combat cancer cells without any significant effect on noncancerous cells. [4] Teas made from dandelion have also been known to flush out the intestines and aid the recovery and healing of damaged pancreatic tissues. [2]

This herb has proven itself to be one of the best in promoting a healthy pancreas. The roots of gentian can stimulate the pancreas, gall bladder and mucous membranes of the stomach to increase secretion of pancreatic enzymes, bile, stomach acid and digestive juices. [9]

Now considered to be an endangered species, goldenseal is one of the most highly valued herbs today because of its medicinal and therapeutic benefits. More than its ability to lower blood sugar and aid the overall functioning of the pancreas [14], goldenseal also helps to stimulate the beta cells of the pancreas which is beneficial to people suffering from diabetes.

Goldenseal is considered to have diuretic, antibacterial, antiseptic, detergent, laxative, tonic, stomachic, muscle stimulant, anti-inflammatory, emollient, detergent, and antispasmodic properties. According to research, goldenseal is capable of promoting the healthy functioning of the colon, spleen and the pancreas. Goldenseal also works by enhancing the production of bile. [10]

A native fruit in the American Southwest, cedar berries are powerful grape-like fruits that promise to offer large amounts of health-promoting nutrients which are beneficial to the human body. The seeds and pods of cedar berries are believed to be effective in improving the functions of the digestive and pancreatic system of the body. By regulating the normal functioning of the pancreas, stabilized sugar levels are achieved. This in turn can be extremely helpful to those suffering from diabetes. [11]

Over time, many people have become more aware of olive leaves and their health benefits. These leaves actually contain powerful ingredients that help to improve the circulatory system, detoxify the blood, eradicate free radicals and lower blood pressure. In the long run, these benefits help to strengthen thyroid, liver, and pancreas functions.

Olive leaves contain oleuropein, a chemical compound that serves as the anti-inflammatory agent within the pancreas. It helps to reduce swelling and pain associated with pancreatitis. Furthermore, its oleic acid content is useful for getting rid of free radicals that impose significant cellular damage to the organ. Olive leaves were found to have the potential of also inhibiting cancer cell proliferation. [15] Research further shows that the use of olive leaves is beneficial for reducing one's risk for breast and pancreatic cancer. [12]

Licorice is considered to be an excellent treatment for many pancreatic disorders - especially in Traditional Chinese Medicine (TCM). According to research, licorice is fortified with anti-inflammatory compounds that work to reduce the pain and swelling associated with pancreatic conditions like pancreatitis. [13]

[5] The effect of Equisetum arvense L. (Equisetaceae) in histological changes of pancreatic beta-cells in streptozotocin-induced diabetic in rats. http://www.ncbi.nlm.nih.gov/pubmed/?term=horsetail%2C+pancreas