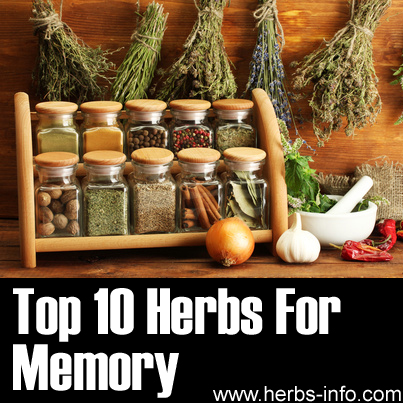 Many people associate memory loss with ageing. But whether it's occasional forgetfulness or loss of short-term memory, one must be aware that there are specific factors that can cause it even at a young age instead of simply attributing memory loss to a natural decline in cognitive functioning. These causes include alcohol, drug or tobacco abuse, certain medications, sleeplessness, stress and depression, nutritional deficiency, head injury, stroke and dementia. [1]

Whether to prevent or treat memory loss, these natural herbs have served as timeless aids:

There is a reason why gingko biloba supplements are one of the most popular herbal medications in Europe and America. Among its many therapeutic benefits, gingko biloba's power to enhance memory stands out. In particular, scientific studies discovered gingko's potency to aid memory and thinking of those with Alzheimer's or vascular dementia by protecting nerve cells damaged by these disorders to improve learning, daily activities, social behaviour and reduce feelings of depression. [2] Laboratory tests further show gingko biloba's value in improving blood circulation along the central nervous system to promote overall brain development and functioning. [3]

The mechanism behind gingko leaves is due to the presence of two types of chemicals, flavonoids and terpenoids, which contain antioxidants to combat free radicals that contribute to health disorders like Alzheimer's and dementia. Studies confirming gingko's effectiveness to enhance memory in older adults continue to be promising. [2]

Lab trials have demonstrated how ginseng appears effective for memory impairment. Among mice given dosages of ginseng extracts, remarkable improvements in water maze tasks were exhibited and ginseng was shown to activate neurotransmitter activities that promote memory enhancement. [4]

This herb is more than just an aromatic spice. Rosemary has also been traditionally used to improve memory. Science backs this tradition since like gingko biloba, rosemary has been shown among laboratories to have antioxidant properties that neutralize free radicals. One study suggests that when used in aromatherapy, rosemary can reduce cortisol levels and therefore, anxiety. Another study verified the usage of rosemary, combined with other essential oils, to alleviate stress and increase concentration and memory of graduate nursing students. [5]

Experts believe that sage contains active ingredients that boost the chemicals that trigger transmission of messages within the brain. When scientists from the Universities of Newcastle and Northumbria tested 44 people by having them take either sage or a placebo, results showed that those given sage performed better in a word recall test. They also suggest potential benefits of sage for patients living with Alzheimer's. Experiments have shown sage boosting the same brain chemicals that drop when one is afflicted by Alzheimer's. [6]

Like gingko biloba and rosemary, green tea has always been known for its antioxidant properties. And recent studies continue to verify this benefit. In March 2013, a scientific research has confirmed that green tea extracts help shield proteins and lipids from age associated activities caused by oxidation. Animals treated with these extracts showed better spatial learning abilities and studies suggest this plant can protect the hippocampus from aging-related decline. [7]

Even if memory loss may be linked to various sources, it can fortunately still be reversible with proper treatment according to its specific cause. [1] And the above herbs to aid bad memory have not just been traditionally used by herbalist throughout the centuries; they have also been clinically proven in many studies giving you better assurance of their safety and effectiveness.

This herb has long history of use as a treatment for various kinds of illnesses. More than its reputation to treat and manage diseases, rhodiola is recognized as one of the best herbs that enhance memory. Some people called this herb as Aaron's rod, roseroot or golden root. Recent scientific studies claim that rhodiola has the ability to relieve depression and improve one's focus and memory. [8]

Some researchers believe that this herb contains adaptogenic qualities which stimulate the central nervous system of the body, thereby resulting in enhanced memory and concentration. One study revealed that intake of rhodiola regularly can increase one's memorization abilities. [9]

If you are in search for the best memory-enhancing herbs available today, then bacopa should be on your list. Numerous studies have been conducted to test the effectiveness of bacopa in improving one's memory and mental function. Most of the results revealed that, indeed, bacopa has the ability to promote mental health and better memory.

In ayurvedic medicine, bacopa has been used since old times to enhance learning, concentration and memory. To test the effectiveness of bacopa, a scientific study in Australia was conducted and it involved 46 volunteers aging from 18-60. The volunteers were divided into two groups and each volunteer in one group was given 300mg of bacopa everyday. After 12 weeks, researchers found out that there has been a significant improvement on the subjects' verbal learnings abilities, speed of information processing and memory. Today, bacopa is widely used as a treatment for memory problems. [10]

Based on the results gathered, the researchers concluded that "The current finding suggests that B. monniera may improve higher-order cognitive processes that are critically dependent on the input of information from our environment such as learning and memory." [11]

Also referred to as Indian Pennywort, gotu kola is an amazing herb that promises great results in enhancing the memory and improving brain functions. Generally, this powerful herb helps in improving one's mental function. In traditional Chinese and ayurvedic medicine, gotu kola is used in rejuvenating the mind and the body [12] and is considered an "anti-aging" herb.

According to studies, gotu kola contains certain substances that increase brain power and improves blood circulation to the brain which results to better memory, concentration, intelligence, and attention span. [13]

Known for its antispasmodic, antibacterial, anti-cancer and sedative effects, periwinkle also makes a great herb that enhances memory. Its seeds and leaves actually contain vincamine which is considered as a precursor to vinpocetine. This chemical is a blood thinner that improves circulation of blood to the brain and promotes better oxygen use. Today, this chemical is widely used to enhance memory naturally. [14] In fact, vinpocetine is one of the most potent ingredients found in many pharmaceutical products for Alzheimer's disease and dementia.

Some researchers claim that periwinkle works like ginkgo biloba in enhancing memory. Its vinpocetine content acts as a powerful scavenger of free radicals. This chemical prevents any damages to the blood vessels thereby preventing dementia and senility. Furthermore, it encourages the brain to absorb more nutrients which significantly improves the organ's functions. By increasing oxygen supply to the brain, cognitive and memory abilities are enhanced significantly. [15]

Can berries really improve memory? It appears that they can. Modern scientific studies found out that blueberries contain powerful compounds like flavonoids, which are believed to be effective in enhancing learning ability, cognitive functions, verbal comprehension, numerical ability, decision making, reasoning ability, and more importantly, memory. Furthermore, studies show that regular intake of flavonoids helps in slowing down the decline in cognitive ability and it offers protection against diseases like dementia, Parkinson's and Alzheimer's. [16]

In a study conducted at Harvard University, intake of blueberries helps in boosting brain power. Also, it has been found to aid in staving off cognitive decline and in preventing memory loss that normally comes with aging. According to researchers, flavonoids have anti-inflammatory and antioxidant properties that play vital roles in improving brain functions as inflammation and stress are considered as one of the major factors that can trigger the decline in brain functions.

[7] Protective effects of a catechin-rich extract on the hippocampal formation and spatial memory in aging rats. http://www.ncbi.nlm.nih.gov/pubmed/23473881