Herbs For The Liver 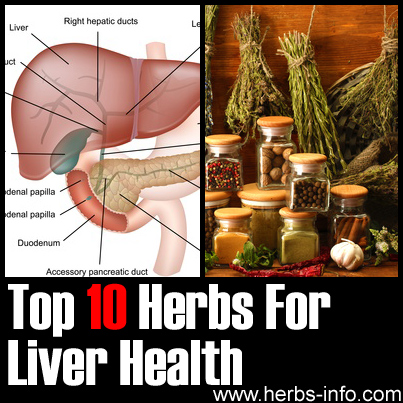 The liver is a critical organ which is often overlooked or underestimated. The liver cleanses the body, metabolizes nutrients and processes toxins. It could be seen as the great chemical-processing unit of the body. If liver health deteriorates, symptoms like fatigue, hormonal imbalance and headaches may begin to appear. [1] In essence, proper functioning of your other organs is dependent on healthy liver functioning, leading to the opinion that "you are only as healthy as your liver".

Many people take all sorts of medications to treat various kinds of ailments without considering their effects on the liver. With so many chemicals and synthetic drugs being ingested these days, the liver must work harder to fulfil its task of cleansing, detoxifying and purifying your body. It is ironic that something meant to treat disorders may be harmful in other ways.

It is good to know that many natural herbs that remedy other health conditions are considered "liver-friendly". Research has also identified particular herbs that directly promote liver health and may assist with prevention of cirrhosis, or be of benefit in cases of hepatitis B and C. [2] 9 herbs considered beneficial to the liver are described below:

Top 10 Herbs For The Liver

One of the most popular liver herbal remedies and found in a large number of liver tonic formulas, milk thistle is considered beneficial to the liver because the anti-oxidant compounds of milk thistle have been found by researchers to aid in detoxification process by flushing out toxins like alcohol, regeneration of damaged liver tissue and stimulation of bile production. [3] Scientists have found that one of these active compounds is silibinin which alleviates hepatic conditions by reducing inflammation and fibrosis. [4] Consequently, 5 clinical trial analyses involving 602 cirrhosis patients have suggested that milk thistle can reduce liver-related mortality. [2]

In a scientific study, leaf extracts of dandelion leaves were fed to the mice for a month to investigate their hepaprotective effects. Results have confirmed the benefits obtained in hepatic functioning were due to the herb's antioxidant and anti-inflammatory activities. [5] Aside from its leaves, the dandelion's roots are a popular liver aid [1] that is known throughout centuries as a diuretic and used by herbalists to combat fatty liver and cirrhosis. [3]

The American Cancer Society mentions licorice as a potent herbal remedy to treat liver diseases like hepatitis and cancer among others because of the chemical glycyrrhizin it contains. [6] Another study reports the benefits of licorice is linked to interferon production which is responsible for the plant's ability to protect the liver from harmful poisons. [1]

Used in European medicine since 18th century, artichoke has been proven to provide protective effects on liver cells because of the influence of active antioxidant substances. [7] Specifically, artichoke has been found to support liver regeneration and bile production which is essential for digestion. Some clinical trials have also demonstrated the efficacy of artichoke in lowering triglyceride levels. [1]

Belonging to the same family as ginger, turmeric stimulates enzymes that detoxify and as researchers from UCLA have discovered, can likewise fight carcinogens by keeping malignant cells from spreading. [3] Initial researches on liver cells have suggested turmeric extracts may block the replication of hepatitis B virus. [2] Moreover, curcumin, the active ingredient in turmeric has been demonstrated in clinical studies as effective in reducing liver triglycerides - which are also linked to metabolic disorders like visceral obesity, insulin resistance, fatty liver and diabetes. [8]

Burdock is regarded by Ayurvedic medicine doctors as a blood purifier and restorer of damaged cells. It is also a popular herb included in liver support and liver cleansing formulas. It has been found by scientific study to assist with repair of a liver damaged by alcohol. Burdock may trigger allergic reactions in people with allergies to ragweed, daisies or chrysanthemums (from the same plant family). Burdock should only be wildcrafted (gathered from the wild) by an expert as the roots are similar to belladonna, a very poisonous plant - and should be consumed moderately as high doses could be hepatotoxic. [9] Burdock root can be obtained and made into a tea, tincture, as burdock tea bags or already prepared as beverage.

For a very long time now, chicory root extract has been widely used in treating many liver disorders. While the ancient Romans use this herb in cleansing their blood, old Egyptians use it to purify both the liver and the blood. Furthermore, chicory root is believed to be effective at increasing the body’s resistance against the formation of liver stones and gallstones. According to research, chicory root works primarily by increasing the production of bile. By so doing, digestion is improved because excess bile can break down additional fats, which in turn results to better blood composition. In the long run, this can positively affect the health of the liver and the gall bladder. [10]

Furthermore, chicory root is also effective in protecting the liver against the harmful effects of drinking excessive amount of coffee. The herb has been used traditionally to treat liver disorders. Recently, a phenolic compound called esculetin, isolated from chicory, has been considered as a hepatoprotectant as during tests it protected against liver damage triggered by intake of carbon tetrachloride and paracetamol. [11]

Also, yellow dock root works by stimulating regular bowel movement thereby preventing waste from lingering any longer at the intestinal tract. It also promotes frequent urination. According to research, regular elimination of waste from the body is effective in preventing the accumulation of toxins in the bloodstream, gall bladder, and liver, most especially. [12]

Considered as one of the most important herbs discovered by the Chinese, astralagus proves to be one of the most beneficial herbs for the liver. Results of a scientific study revealed that this herb is capable of reducing liver damage that has already been incurred as well as in protecting the liver against further possible damage. [13]

More than its ability to lower acidity in the stomach, astralagus is also useful in improving digestion as well as in eradicating chemical toxins and heavy metals from the body. As mentioned earlier, improved digestion often leads to better bowel movement. In the long run, this can affect the liver positively. [14]

Like the above herbs which are all-natural, the American Liver Foundation recommends natural methods like healthy diet and weight, regular exercise, regulated / decreased alcohol intake and proper hygiene as most effective to boost liver health. [2] As the old saying goes, prevention is always better than cure.

Beets are regarded as a mighty natural remedy for the liver! They are considered detoxifying to the liver and have been used in this regard for many years. The substance betanin, found in beetroot juice, has been shown to be hepatoprotective. [15] Additionally, beets contain numerous other substances thought beneficial, including pectin which is thought to help flush toxins that have been removed from the liver. [16] For best benefits, eat some whole beets for the beneficial fiber, and some beet juice for the benefits of the nutritional components undamaged by cooking.

[4] Milk thistle and its derivative compounds: a review of opportunities for treatment of liver disease. http://www.ncbi.nlm.nih.gov/pubmed/23140176

[7] Artichoke--untapped potential of herbal medicine in the treatment of atherosclerosis and liver diseases. http://www.ncbi.nlm.nih.gov/pubmed/23421107