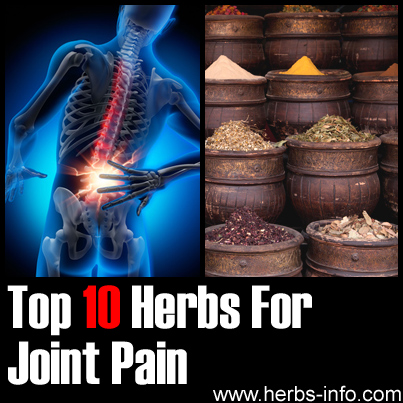 A debilitating condition, joint pain can be experienced as a result of ageing, over-use, or autoimmune diseases attacking the joints and their surrounding tissue. [1] If you have tried all available traditional medications yet failed to get the results you expected, this would not be surprising as many drugs only alleviate the symptoms without targeting the underlying cause. [2]

Several alternative herbal treatments have been researched - and lab studies suggest that these may have the potential to address both symptoms and origin. Below are 10 herbs considered useful for managing joint pain:

This is a popular herb present in various commercial ointments externally applied to the skin. When applied as a balm or cream, arnica has been shown to serve as a natural pain reliever to alleviate soreness and stiffness. [1] The evidence of arnica's clinical value is rich that when a study was conducted to compare its effects with ibuprofen in 204 patients with active hand osteoarthritis, there was no difference found in pain and hand function improvements between ibuprofen and arnica tincture after 3 weeks of treatment. This study suggests that arnica formulation is comparable to ibuprofen in treating hand osteoarthritis, yet without the potential side effects of ibuprofen. [3]

Ginger is traditionally known to aid nausea but research has also found convincing evidence of its success in combating arthritis. [2] Its active ingredients, gingerols, possess anti-inflammatory characteristics responsible for its medicinal actions. Ginger has been found to relieve pain by preventing cytokine formation, an immune chemical that triggers inflammation. Consequently, one 3 year study discovered that 75% of the participants with rheumatoid arthritis experienced improvements in pain and swelling after using powdered ginger. [1]

Its name may sound daunting but once you have infused this herb in tea, skin rash that would be brought about by this plant's hairs will naturally be neutralized. After concocting tea made from dried or fresh leaves of stinging nettle, it may be used to alleviate pain linked to joint pain, arthritis and gout. [4] Exploratory studies that investigated the value of stinging nettle as a useful, safe and cheap therapy in treating joint pain have discovered nettles as being very effective to the extent that some subjects believed they have been cured by it without any major side effects. [5]

Researchers discovered how the interesting mechanism behind rubbing cayenne works to relieve joint pain; cayenne, through the presence of its active ingredient capsaicin, acts as a counterirritant to the pain by producing mild irritation to distract your nerves from the more severe joint pain. [2] Eventually, repeated application of cayenne pepper can significantly reduce arthritic pain. [4] Because of cayenne's anti-inflammatory properties, experts believe that it can also ease gout and gut-related pain like ulcers. [1]

This tree commonly found in India attributes its therapeutic value to its gum which promotes anti-inflammatory, anti-arthritic and analgesic activities. A 2003 randomized controlled study that evaluated the efficacy, safety and tolerability of boswellia extract in 15 patients with osteoarthritic knees concluded that this herb can decrease knee pain and frequency of swelling, increase knee flexion and walking distance after 8 weeks of usage with minimal side effects. [6] Moreover, boswellia is believed to prevent invasion of inflammatory white cells into damaged issue making it a natural pain killer for osteoarthritis, gout and possibly, other types of arthritis as well. [1]

According to research, when it comes to joint pains, increasing your intake of foods and supplements rich in essential fatty acids can really of great help. Aside from its sterol and tannin content, burdock contains high levels of essential fatty acids which are known for their anti-inflammatory effects. [7]

Burdock root contains analgesic, antioxidant and anti-inflammatory properties that help in reducing inflammation and pain associated with arthritis and other degenerative diseases. Studies show that burdock root helps in eliminating the discomforts caused by arthritis such as stiffening, swelling, tenderness, pain when moving. [8] Though generally safe to use, some have said that burdock should not be used long-term. [9]

For over 7,000 years, flax has been widely cultivated because of its powerful healing compounds. This potent herb is known for its Omega 3-ALA content which is noted for its ability to fight against inflammation. Omega 3 fatty acids actually limit the inflammatory reactions caused by gout and joint pains. The use of flaxseed of oil proves to be effective in lessening the intensity of severe and sudden pain and swelling of the joints. [10]

Known for its anti-inflammatory effects, turmeric is a powerful herb that aids in the treatment of a wide range of health conditions including gout, arthritis and joint pains. This excellent pain reliever works because of its curcuminoids and curcumin contents that help in reducing inflammation. [11]

In a study conducted at the University of Arizona, it was found out that intake of turmeric really helps in dealing with inflammation. Results showed that turmeric reduced swelling to a certain degree. Researchers concluded that turmeric works by blocking down the production of protein on genes that tell the tiny blood vessels to swell and grow. [12]

This famous yellow-orange spice is used to help people suffering from achy and sore joints. The Journal of Alternative and Complementary Medicine published a study in 2009 which compared the effects of curcumin, an active ingredient of turmeric, and ibuprofen to 107 subjects who were suffering from knee osteoarthritis. Results showed that curcumin was as effective as ibuprofen in improving knee function and in alleviating pain. [13]

Licorice is probably one of the most popular herbs for joint pains. It works by resembling the activities of the body’s natural cortiscosteroids that help in relieving inflammation. Licorice also works by eradicating free radicals on the affected areas as well as in inhibiting the production of enzymes that contribute to inflammation. When used as a supplement or tea, licorice helps in controlling the body’s production of cortisol hormones which eases the pain associated with arthritis and joint pain. [14]

A native herb from the Balkan Peninsula and Europe, feverfew also proves to be an excellent herb in relieving joint pain. Research has demonstrated that this herb is capable of reducing pain-causing inflammation in tissues and joints. Its parthenolide content inhibits the release of histamine, serotonin and other inflammatory agents that trigger the spasm of the blood vessels and promote inflammation. Like aspirin, feverfew works by reducing the inflammation and intensity of pain throughout the body. [15]

Notes Do not expect these herbs however to instantly cure joint pain overnight. Some herbs take longer to work their magic than traditional medications. [1] However, their cumulative effects may be more effective and may be safer for long term use given the right dosage. Be diligent also in understanding the safety and contraindications of the herbs you are considering. If in doubt, or if you are taking prescription meds already, it's best to consult a physician before taking herbs. You can learn about many of the herbs on this site; however you can also search on "________ (herb name) safety" or _______ contraindications. This page is not medical advice.

[3] Choosing between NSAID and arnica for topical treatment of hand osteoarthritis in a randomised, double-blind study. http://www.ncbi.nlm.nih.gov/pubmed/17318618