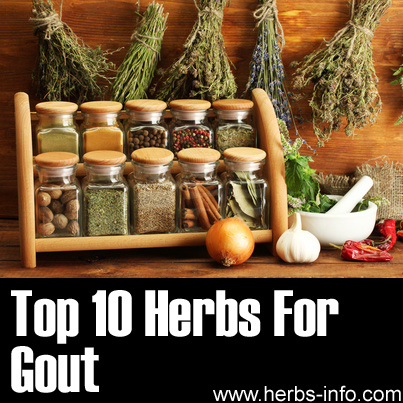 The US National Library of Medicine describes gout as a form of arthritis resulting from higher than normal levels of uric acid in the bloodstream, triggering joint inflammation. [1] The sudden excruciating or throbbing pain experienced is due to sharp uric acid crystals known as monosodium urates surrounding the fluids around the joints. [2]

For many, gout is bad news. For others, it can even be worse. Gout that is acute and affecting one joint can become chronic and involve more than one joint. Pain that may slowly disappear after few days may suddenly return after some time. Medications you may be taking if you are obese, diabetic, anemic or have kidney problems can actually interfere with uric acid removal and increase your chances of developing gout. Chronic gout may not just be painful but lead to further complications like chronic kidney failure. [1]

While the actual root cause of gout remains unclear, there are however natural herbs and foods that may be beneficial. Below are 10 of them:

Cherries are not only tasty treats for desserts, they are also being explored by the United States Department of Agriculture's research department as potential remedy for gout. [3] As tests have shown, one half pound of cherries daily for 2 weeks can reduce arthritic symptoms because of the anthocyanin they contain which preserves collagen integrity and decreases inflammation. [2] In other tests conducted by the USDA, women who consumed 48 bing cherries everyday showed significant improvements in uric acid reduction and consequently, their gout conditions. [3]

A 2003 mice experiment in Australia showed that extracts from Indian celery seed together with NZ green lipped mussel can amplify the effects of salicylates and prednisone for treating chronic inflammation like arthritis and fibrosis. They have also found these to reduce gastrotoxic and lymphopenic related side effects of steroids. Hence, celery seed is identified as one of those having powerful anti-inflammatory properties beneficial for osteoarthritis caused by gout-like symptoms. [4] Research shows the way celery seeds work is that they flush out urates from the kidneys to reduce acidity within the body while also possessing a mild tranquilizing effect. [2]

While studies on this plant are still limited, initial research shows promising results on Paederia Scandens' effects on hyperuricemeia which is linked to gout. An exploratory investigation showed that when extracts of Paederia Scandens were taken orally for 14 days, they exhibited strong hypouricemic activities among hyperuricemic rats. They were also shown to inhibit xanthine oxidase which serves to decrease elevated uric acid levels. [5]

When drank as a tea or applied as a compress, ginger can produce anti-inflammatory activities that are found effective for osteoarthritic, rheumatoid arthritic and gout sufferers. [2] Results of one study showed that isolating the effects of 6-shogaol, an active compound from ginger, reduces levels of monosodium urate crystal inducing inflammation. [6]

For centuries, burdock root had been an excellent treatment for gout and other arthritic conditions. It contains cleansing and purifying properties that aid in eliminating excessive amount of uric acid in the body, which is considered as one of the major causes of gout. Whether applied topically or taken as tea, burdock proves to be effective in relieving inflammation and pain. [7]

In cases where a gout attack causes the ankle or feet to swell, you can apply the burdock root poultice on the affected area. This helps in removing excess fluids from the swollen area as well as in relieving the excruciating pain. [8] In addition to its anti-inflammatory effects that relieve pain and swelling, burdock also makes an excellent diuretic herb when applied as a poultice on affected area or when taken as tea. [9]

Just like burdock, turmeric also makes a wonderful herb for gout. A native spice from Asia, turmeric has been used in Ayurvedic and Traditional Chinese Medicine in treating a wide range of illnesses including gout. The herb contains adequate amount of curcumin which plays a vital role in helping people with gout.

The herb actually contains powerful antioxidant, anti-inflammatory and anti-arthritic properties that are very beneficial in dealing with the symptoms of gout. Curcumin primarily works by relieving inflammation and swelling. Furthermore, it prevents the production of prostaglandins in the body which are closely associated with pain. And lastly, the curcumin content of turmeric triggers the adrenal gland of the body to release cortisone, which is considered as potent reliever of pain and inflammation. [10]

Also known as Indian winter cherry or Indian ginseng, ashwagandha is a potent reliever to many symptoms of gout. In fact, it is widely used to treat back aches, rheumatoid arthritis, joint aches and of course, gout. [11]

What makes ashwagandha effective in dealing with gout symptoms is its allopurinol content. Basically, this chemical prevents the formation of uric acid inside the body. It actually inhibits the release of xanthine oxidase which triggers uric acid formation. Some doctors also prescribe xanthine oxidase inhibitors to prevent gout attacks. [12]

Through the years, Cat's claw continues to get a great deal of attention because of its very promising abilities to treat a wide range of health conditions. In fact, it is now considered as one of the best-selling herbs in the US. The herb contains anti-bacterial, anti-fungal, anti-viral and anti-inflammatory properties that can be very beneficial to people suffering from gout. Usually used to relieve chronic pain, cats claw helps in relieving pain and inflammation that are associated with gout, arthritis, rheumatism, and other inflammatory conditions. [13]

A wild herb from South African, devil’s claw is probably one of the most popular herbs that offer gout relief. This herb primarily works by carrying the inflammatory agents away from the swollen and affected areas. It also prevents the build-up of uric acid crystals that trigger severe pain. [14]

According to a research conducted at the University of Maryland Medical Center, devil’s claw contains anti-inflammatory properties that help people with gout, arthritis and other degenerative illnesses. When applied as ointment, this herb helps in soothing painful and inflamed joints.

While gout may not be entirely preventable, you can still avoid factors that trigger its symptoms like initiating dietary and lifestyle changes. [1] Complemented with some of the herbal remedies above, it can be easier to manage this disorder and still live a normal day to day life.

[4] Combination anti-inflammatory therapy: synergism in rats of NSAIDs/corticosteroids with some herbal/animal products. http://www.ncbi.nlm.nih.gov/pubmed/15035799